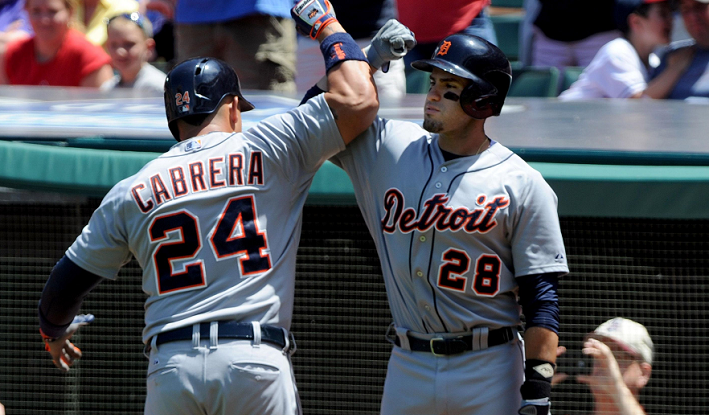 MLB Betting News
We have mentioned this several times in the past, but it’s something that is worth repeating: the best teams in the league are going to experience a losing streak at some point in the season. It’s one of the more inevitable elements of baseball, and is something that the Detroit Tigers have just had to deal with. They will welcome in the Chicago Cubs for a pair of interleague games, the second of which is set for Wednesday night. So let’s have a look at the MLB lines and other relevant info surrounding this game.

The Detroit Tigers (30-28) have spent the majority of their season battling for top spot in the AL Central. They are now down in third, 3.5 games out of the top spot, and it’s an 8-game losing skid that is to blame for their current position. Detroit suffered back to back series sweeps at the hands of the Angels and the A’s before losing the first game of the series to the Chicago White Sox. They responded well to that adversity, though, and have slowly started to turn things around by winning the final 2 games in the series versus the White Sox. They will have the chance to create a new positive streak when they face the other Chicago team back at home. Detroit will hand the ball to Shane Greene (4-5, 5.40 ERA) in the second of the two games. Greene has not been very good in his last three starts, getting hit hard and losing them all.The Chicago Cubs (30-25) continue to cling to second place in the NL Central, but can now feel the surging Pittsburgh Penguins breathing down their necks. The Cubs are certainly helping their own cause, though, and were very good value for their 3 wins in a 4-game series with the Washington Nationals. That helped them go .500 during their last 10 games, and they will be hoping that it’s a sign that things are starting to get back on track after a bit of a lean spell. This is still a fun team to watch, though, and rookie Kris Bryant continues to be one of the best stories in baseball this season. Jake Arrieta (5-4, 3.04 ERA) will be on the mound for the Cubs on Wednesday. Arrieta was outstanding in his last start against the Nationals, giving up a single run over 6 innings.

Chicago Cubs
Detroit Tigers
The Cubs will have a good chance to warm up their bats against a struggling Shane Greene. I think they will jump on him early and do enough to get the win in this one.Sources:ESPN: http://espn.go.com/mlb/player/_/id/30145/jake-arrietaCBS Sports: http://www.cbssports.com/mlb/players/playerpage/2040765/shane-greene
Older post
Newer post