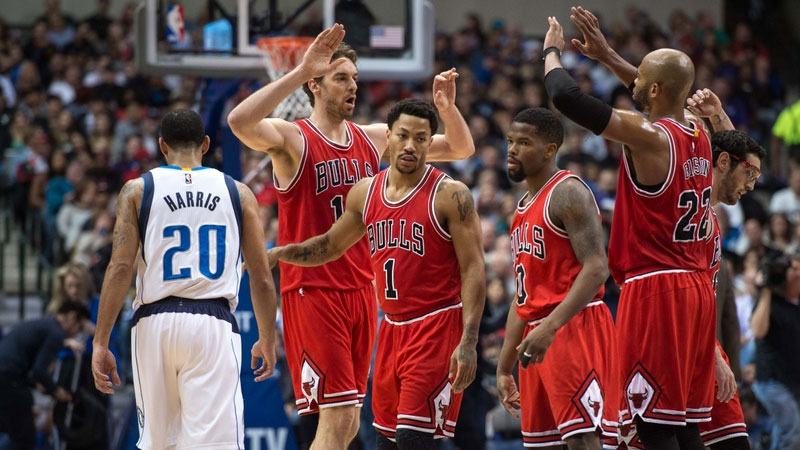 NBA News and Rumors
The Chicago Bulls have been under a lot of heat in their last two games and going back friendly confines at the United Center for Game 6 of their Second Round series against Cleveland will be a welcome tonic. Meanwhile, all roads lead back to Atlanta, as the Hawks look to claim a third win over the stubborn Washington Wizards.With Cleveland boasting of a 3-2 lead in their series against Chicago, and the Hawks tied at 2-all (2-2) with the Wizards, which two teams will wade through the remaining second round games and make it to the Eastern Conference NBA Finals? Find out as we breakdown the NBA betting odds and chances for all the four teams in the section below.

From Down Under to North of the Border… Un Alley-Oop de Delly a TTop rocks The Q! LISTEN: http://t.co/Vvs0VaSgDS pic.twitter.com/d8ke5zQX2l

In spite of the injury concerns in their team, the Cavs have still been able to hold their own and win games. In their last outing on Tuesday, LeBron James proved that he was still the King in Pro-basketball as he scored a game-high 38 points and added 12 boards, 6 assists, 3 blocks and 3 steals to lead the Cavs to their 106-101 win over the Bulls on Tuesday. More impressively, James played for 41 minutes without a turnover (earning him his first error-free game of the season), and the rest of the team offered sufficient support on both ends of the field to prevent the Bulls from staging a comeback. Following that win, Cleveland (who last reached the NBA Finals in 2007) now just need one win to progress to the Eastern Conference Finals, something that is very possible, going by the way Chicago has perennially failed to take its chances against the shorthanded Cavs.

With the shaky Bulls requiring two consecutive wins in Game 6 (at home) and Game 7 (on the road) to progress to the Eastern Conference Finals, the future doesn’t look promising for coach Tom Thibodeau and his team.On paper, the likes of Jimmy Butler, Derrick Rose, Nikola Mirotic and Mike Dunleavy have the offensive potential to blowout the Cavs if they want to. Unfortunately, Chicago’s offense has been very inconsistent, while Taj Gibson is simply not doing enough in place of the injured Pau Gasol. On the opposite side, Tristan Thompson continues to be more than a handful as he leads Cleveland’s rebounding duties in the absence of Kevin Love.And to make matters worse for the Bulls, Gibson is facing a potential suspension after he got involved in an altercation that led to the ejection from Game 5. Still, if Rose and his teammates can come up big in the remaining two games, then maybe we will be seeing the Bulls (who last reached the NBA Finals in 1998) in the Eastern Conference Finals.

The Hawks are still harboring dreams of making their very first appearance in the NBA Finals. However, after breezing through their regular season games to become the top-seeded team in the Eastern Conference, the Hawks have been a shadow of their dominant selves, struggling in their First Round series against Brooklyn, and now finding it difficult to break down the Wizards, who’ve been playing without their injured star John Wall. Even so, the Hawks are coming off a crucial 106-101 road win over the Wizards in Game 4, a game that saw Atlanta’s Big 3 (Jeff Teague, Paul Millsap and Al Horford) play pivotal roles for their team. If the Hawks can continue playing similarly in the remaining games, starting with Wednesday’s Game 5 clash in Atlanta, then their dreams about the NBA Finals will stay valid. If not, well, you know how the rest of the story goes.

Washington Wizards (52-38, Tied 2-2 in their Series against Atlanta)

John Wall is reportedly making good progress in recovery, but he is unlikely to return to the playoffs, so the Wizards will have to soldier on without him. In the last three games they’ve played without Wall, the combination of Paul Pierce, Bradley Beal, and Nene has been instrumental, with the three players sharing responsibilities both offensively and defensively.Unfortunately, the Wizards don’t have a reliable go-to guys offensively, which makes it difficult to march the Hawks, who are known for their sharpshooting skills and can be very dangerous when their 4 All-Stars (Teague, Millsap, Horford and Kyle Korver) get the offense going.Pierce and his teammates will thus need to find ways of knocking down their shots while limiting Atlanta from getting easy open looks if the Wizards (whose last appearance in the NBA Finals came in 1979) are to have any chance of stopping the Hawks.

Despite their slow start to their series against the Wizards, the Hawks are increasingly looking confident and better in their abilities, hence are most likely to claim their series. So, although the Wizards still have the potential to make life difficult for the Hawks, Atlanta is our pick in this series, probably wrapping it all up in Game 6.The Bulls, just like the Wizards, have sufficient talent and are capable of fending off the Cavs, particularly because they’ll have the honor of playing Game 6 in their own backyard. Nonetheless, James, Kyrie Irving and the rest of the Cleveland team have proven that they can survive any form of adversities thrown their way. This admirable quality to relentlessly fight for one another will be very crucial for the Cavs, and we believe that it will help Cleveland to eventually win the series.So, in a nutshell, our NBA picks for the Eastern Conference NBA Finals are the Atlanta Hawks and the Cleveland Cavaliers.Sources:ESPN: http://espn.go.com/nba/recap?gameId=400793125ESPN: http://espn.go.com/nba/player/_/id/996/pau-gasol
Older post
Newer post