NBA News and Rumors
The Los Angeles Clippers have never made the conference finals. That could change as early as Tuesday night as the Clippers are slight favorites on NBA odds to win in Houston and knock out the Rockets in five games. On the series line, the Clippers are huge -2200 favorites with the Rockets at +1375.

Time: Tuesday, 9:30 p.m. ET Venue: Toyota Center, Houston National TV: TNT Opening line: Clippers -2 (219) You could make an argument that this past weekend was the greatest in Clippers history. They stomped the Rockets 124-99 in Game 3 on Friday and followed that up with a 128-95 rout in Game 4 on Sunday. Those are two of the largest margins of victory in postseason history. The Clippers became the first team since the 2001 Lakers to win consecutive playoff games in a series by at least 25 points. Not bad for a team that was down 3-2 against the San Antonio Spurs in the first round and back then +2800 long shots to win the NBA title. Now the Clippers look better than probably any team. They are +150 second favorites to win the West behind Golden State (-125), but those odds will certainly change if the Warriors lose in Memphis on Monday night to fall down 3-1 in that series. DeAndre Jordan led the Clippers with 26 points and 17 rebounds in Game 4. Houston coach Kevin McHale had his guys continually foul Jordan, one of the worst free-throw shooters in NBA history. He went to the free-throw line an incredible 34 times and made 14 of them. In all, the Rockets committed 40 fouls in Game 4, putting the Clippers on the line for 63 free throws. At one point, reserve forward Clint Capela fouled Jordan four times in less than two minutes of action. But the strategy seemed to bother the Houston players more than Jordan. Dwight Howard lost his cool in the fourth quarter and was tossed after getting a second technical. He became the second Rockets player in this series to get tossed as Jason Terry was sent home early in Game 3. Howard was totally outplayed by Jordan with just seven points and six assists. Houston was supposed to have the edge in bench strength but that group was terrible in Game 4. Josh Smith had just one point and seems to have lost McHale’s faith as Smith played only 14 minutes. He is shooting only 27.3 percent from the floor in the series. Corey Brewer had only four points and the Rockets were outscored by 27 points with him on the court. Meanwhile, the Clips got good games from reserve guards Jamal Crawford (13 points, plus-19) and Austin Rivers (12 points, plus-11). 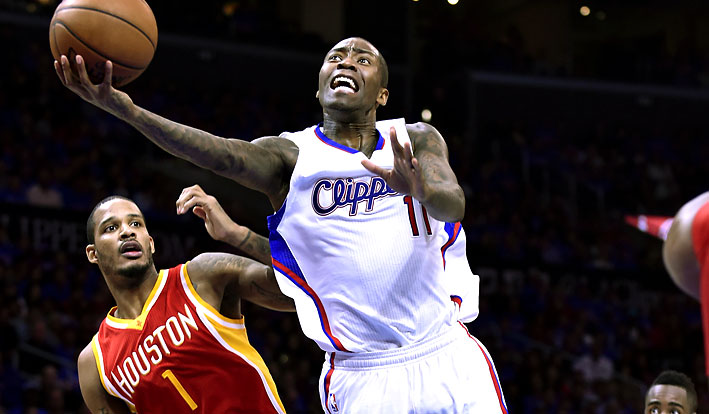 Obviously the earlier the better for the Clippers to win this series and get as much rest as possible before the West Finals. I’m sure as much time off as possible would be welcomed by Chris Paul after he missed the first two games of this series with a hamstring injury.