NBA News and Rumors
Now that the dust has settled a bit in the skirmish between the Dallas Mavericks and the Los Angeles Clippers over the services of center DeAndre Jordan, it’s OK (even in Mark Cuban’s world) to look back and enjoy some of the more humorous moments that came out of the whole conflict. There is the humorous snicker that you might give when NBA betting fans heard that Jordan told Mark Cuban that he was on a date and didn’t have to time to talk or meet with the Mavericks’ owner – only to find out that Blake Griffin was inside the house (and maybe even Doc Rivers’ daughter), adding some intrigue to the nature of that date.

Don’t agree with the furniture layout but I’m not an interior designer. pic.twitter.com/23PNgQB88z

Another funny trend to emerge was the use of the emoji to show the progress of the jousting teams trying to get in position first and get their pitch in front of Jordan. The idea was that the last people to talk to Jordan would likely convince him to join their side – and this is why the Clippers contingent basically barricaded themselves inside Jordan’s house until the clock ticked midnight and he could sign that new contract.The first emoji came from Chandler Parsons, the Dallas Mavericks small forward and major pitchman in the wooing of Jordan. He just sent out an airplane emoji to show that he was headed to Houston. J.J. Redick – a fellow Clipper – followed that up with an emoji of a car – he lives close to Jordan and would clearly get there first. Blake Griffin was on vacation in Hawaii, but he turned around to get to Houston as quickly as possible. He had a triple emoji: a plane, a helicopter and a car. 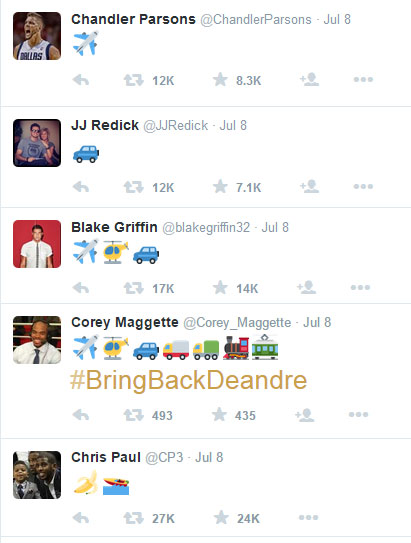 Former Clipper Corey Maggette jumped on the bandwagon, tweeting emojis of every possible form of transportation (plane, helicopter, two trucks, a car, a train and a streetcar), and Chris Paul followed that up with a banana and a boat – a reference to the “banana boat” pictures that were broadcast from Cleveland after the re-signing of Lebron and Co.Paul Pierce, one of the newest Clippers, tried to jump on board, but it was clear that the emoji thing is still new to him, as he attached a picture of a rocket and sent it – a pic of an emoji rather than an emoji, making everyone under the age of 40 laugh.

Tyson Chandler, last year’s center in Dallas, signed a deal with the Phoenix Suns and just put up a sun and a peace sign on his twitter feed, showing that he was distancing himself from what was turning into sheer chaos in Dallas. Kobe Bryant briefly turned his attention to the emoji battle but just put up five trophies with a lock on either side, followed by a ZZZ emjoi and #mambaout – clearly, this was above his attention. Then everyone else with a lot of trophies started putting up their own tweets, with former Lake James Worthy putting up 16 trophies (one for every championship the Lakers had won) and Michael Jordan putting up six (because he has more than Kobe). Baron Davis tweeted out a toilet emoji for whatever reason, and then the Cleveland Browns tried to get in with a dog, a football and the word “Cool” in an emoji, but then Twitter jumped all over the Browns, making fun of their prospects for the coming season. 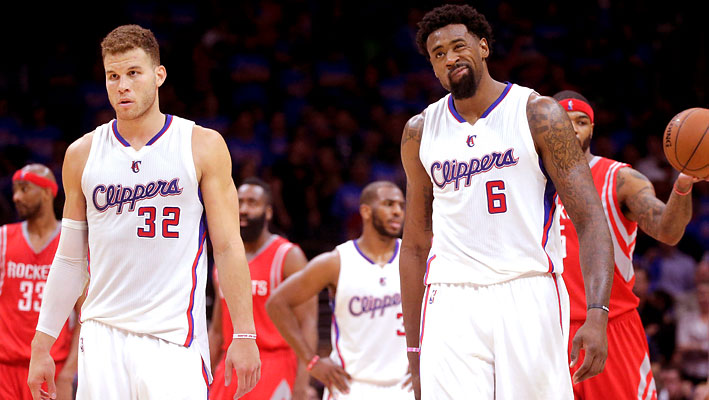 Somewhere in the background, Jordan signed his paperwork to return to the Clippers, and the Mavericks turned their free agent attention elsewhere. The emojis made it fun for a while, though.SourcesYahoo.com (http://sports.yahoo.com/blogs/nba-ball-dont-lie/deandre-jordan-s-indecision-has-sparked-an-emoji-war-between-the-clippers-and-mavericks-191228000.html)ESPN.com (http://espn.go.com/nba/player/_/id/194/baron-davis)
Older post
Newer post