NBA News and Rumors
The Golden State Warriors and Cleveland Cavaliers is an NBA Final match-up that would have seemed totally improbable just a few years back. These two teams fully deserve to be there this year, though, and Game 1 is set for Thursday night in Oakland. The Warriors (-230) are the NBA betting favorites to hoist the Championship, but there are sure to be many who like the chances of the Cleveland Cavaliers (+190) at a pretty juicy price.

Time: Thursday, 9 p.m. ETVenue: Oracle Arena, OaklandNational TV: ABCOpening line: Warriors -5.5 (203)Just like their only other Finals appearance back in 2007, the Cavaliers are there because of LeBron James. With the loss of Kevin Love in the opening round, and the injury issues that Kyrie Irving has had to face during the playoffs, LBJ has been forced to carry this team on his back. It’s a role that he seems to revel in, and it understandable why the odds of him winning the MVP are at EV. The Cavaliers have some other problems in the Finals besides being beat up, and it includes finding ways to get their mediocre defense to slow down the Splash Brothers. This is a series that could end up getting into a shootout, which plays very much in the favor of the guys from Golden State. The Cavs made pretty easy work of their Eastern Conference foes, but the Warriors are a whole different breed. 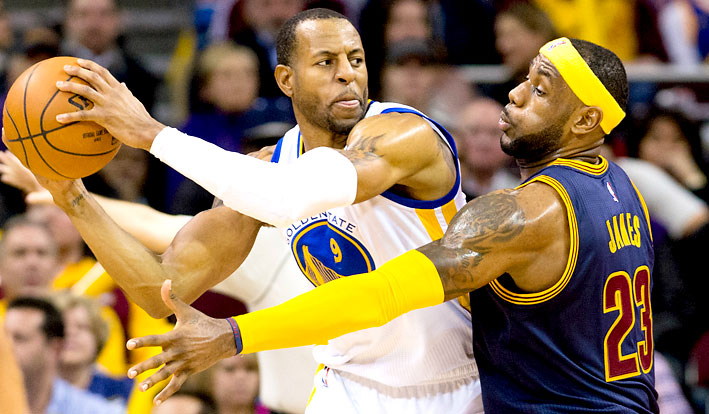 This is the second Finals appearance for the Warriors since they landed in Oakland. Their last trip there was in the 74-75 season, where they swept Washington in 4 games. Golden State has managed to stay relatively healthy during their playoff run, although there were a couple of scares along the way, especially in the series against the Rockets, where things got a little more physical. While it is the Warriors offensive play that gets all the headlines, you cannot ignore their stellar defensive numbers. They ranked #1 in FG% defense in the regular season, and were also top 5 in 3-point defense. If they can find a way to limit the damage done by LeBron James, this series could be over very quickly. If they do manage to pull off the win, you could probably expect Stephen Curry (-220) to add Playoff MVP to his trophy cabinet, which already holds the regular season MVP Award.

There is a massive gap in talent between the Eastern and Western Conference, and you have to wonder just how good this Cleveland team really is. They will get a tough test in the Finals, and really need to steal one of the first two games. That the Warriors only lost 6 games at home all season means that the task of getting that steal is monumental. I like the Warriors to come out as champions, and to win it all in 6 games (+300). SourcesNBA.com (http://www.nba.com/playerfile/stephen_curry/)ESPN.com (http://espn.go.com/nba/player/_/id/6442/kyrie-irving)
Older post
Newer post