NBA News and Rumors
Paul ‘The Truth’ Pierce made a game-winning jumper to lift the Washington Wizards to a crucial victory the last time out and take a 2-1 series lead over the top-seeded and NBA odds favorites Atlanta Hawks. Now, with Game 3 on tap for tonight, the confident Wiz will look to damage Atlanta’s postseason hopes even further.

Pierce hit a bank shot as time expired on Saturday to lift Washington to a narrow 103-101 victory and put his fifth-seeded team into position to take a 3-1 lead tonight. Washington will be without starting point guard John Wall for the remainder of this series, but Pierce, among others, has upped his play in Wall’s absence. “We don’t have a choice,” shooting guard Bradley Beal told reporters. “We can sit here and make excuses or we can go out and prove people wrong.” Washington got a team-high 17 points from Beal, veteran big man Nene and athletically-gifted small forward Otto Porter while Pierce added 13 points while making 3-of-7 from beyond the arc. Atlanta got 18 points from point guards Jeff Teague and Dennis Schroeder, but veteran forward Paul Millsap struggled mightily in Game 3, finishing with just eight points and two rebounds while sweet-shooting swingman Kyle Korver finished with just six points. More importantly for the Hawks, starting small forward DeMarre Carroll, the team’s best defensive player by far, was absent from the lineup late in the game, including on Pierce’s game-winning shot. 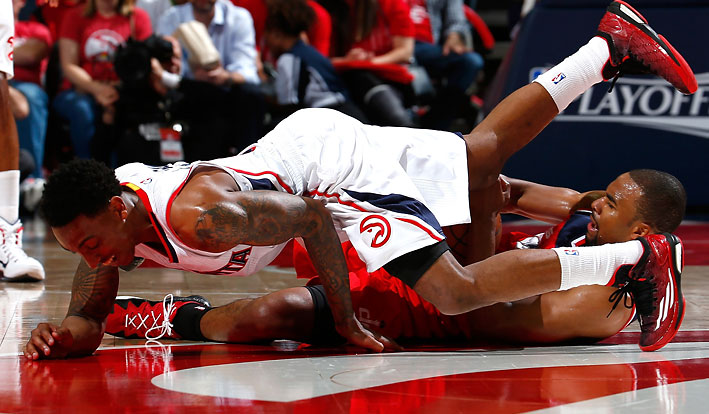 Carroll initially said he wasn’t physically able to play at the time, but retracted those statements the next day, while head coach Mike Budenholzer foolishly insisted he had his best group on the floor to get a stop. “I know a lot of people are going to say a lot of things because I’m supposed to be the top defender on the team, but I guess y’all can talk to Coach and he can answer the rest of the questions,” Carroll told reporters. In spite of Pierce’s heroics, Washington nearly blew a 21-point lead with less than 10 minutes to play in Game 3. Fortunately for the Wizards, Pierce drained one of the shots that will one day land in him the Basketball Hall of Fame. “Took my time. You know, wanted to make sure I got the shot off with no time on the clock,” Pierce told reporters. “I’ve been in those situations many times.” 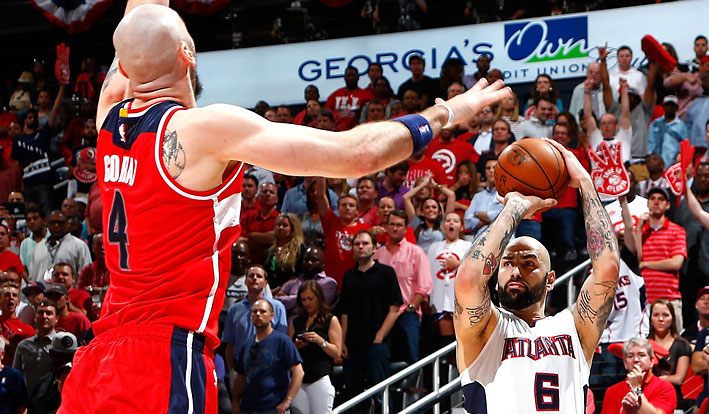 Conversely, the Wizards are seeing the contributions of 2013 No. 3 overall draft pick, small forward Otto Porter, increase with each passing game. Porter is averaging 14.0 points and 9.3 rebounds per game in the series after putting up just 6.0 points and 3.0 rebounds per game during the regular season. I know the Atlanta Hawks are going to be in all-out ‘desperation mode’ tonight, but I just don’t see them escaping a now, energized Washington team that will take the floor tonight knowing all about the importance of winning this contest, thanks to the psychological influence of Pierce. The Hawks are just 3-8-1 ATS in their last 12 games overall and 1-4-1 ATS in their last half-dozen road games while the Wizards have recorded a near-perfect 4-0-2 ATS mark in their last six home games and a bankroll-boosting 8-1-1 ATS mark in their last 10 games overall. The Hawks are just 2-5-2 ATS in the last nine road games against Washington and I just don’t get a warm and fuzzy feeling thinking about Atlanta’s overall state of mind right now. I’m expecting tonight’s game to turn out to be another close affair – which the Washington Wizards narrowly win…and that’s The Truth!