NBA News and Rumors
The Houston Rockets may have stormed back from an imposing 3-1 deficit to complete their historic comeback against the Los Angeles Clippers in the Western Conference semis, but all that did was earn them a date against the top-seeded –and overall NBA odds favorites– Golden State Warriors in a conference finals matchup that gets underway tonight live from Oracle Arena.Now, let’s find out if the Rockets will have ‘lift-off’ in their

The last time the @Warriors were in the Conference Finals… http://t.co/acKvdcrRKS pic.twitter.com/CTpOVRSFAj

The Rockets looked like they were down and completely out of it after falling into a 3-1 series hole against Chris Paul and company in the last round. Apparently however, Kevin McHale’s ballclub needed to have their backs completely up against the wall, because once they did, they came out throwing haymakers like the legendary Mike Tyson once did back in the day.Houston stormed back from a whopping 19-point deficit with 14 minutes remaining in Game 6 before finishing off the stunned Clippers in Game 7 on Sunday.“Ultimate confidence booster,” Rockets guard James Harden told reporters. “There are only a handful of teams that have done that. It gives us confidence.”Harden, the runner-up for NBA MVP honors behind Golden State’s Stephen Curry, averaged a stellar 25.5 points, 5.5 rebounds and 5.3 assists against the Warriors during the regular season and has scored 20 or more points in all 12 of the Rockets’ postseason games while putting up a high of 42.The Rockets also got a variety of fine performances from its cast of veterans, including enigmatic power forward Josh Smith who put up 17.0 points per game over the final two games. Small forward Trevor Ariza made six 3-pointers in the series finale and scored at least 18 points in three games. Center Dwight Howard had six double-doubles in the series against Los Angeles and has nine this postseason overall. 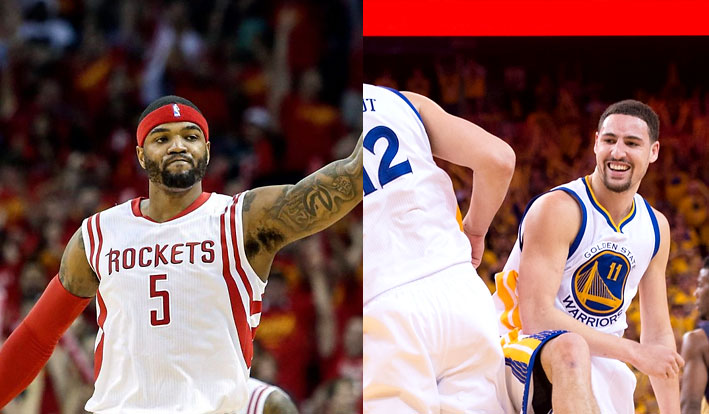 Steph Curry averaged 25.8 points, 8.3 assists and 6.5 rebounds in leading Golden State to an unblemished 4-0 regular season mark against the Rockets and is coming off a fine outing in the Warriors’ Game 6 close-out affair against Memphis in which he scored 32 points and dished out 10 assists.Curry has had five 30-point outings this postseason and power forward Draymond Green is averaging 13.8 points, 10.1 rebounds and 5.1 assists in the postseason. Golden State won the four regular-season meetings by an average of 15.3 points.