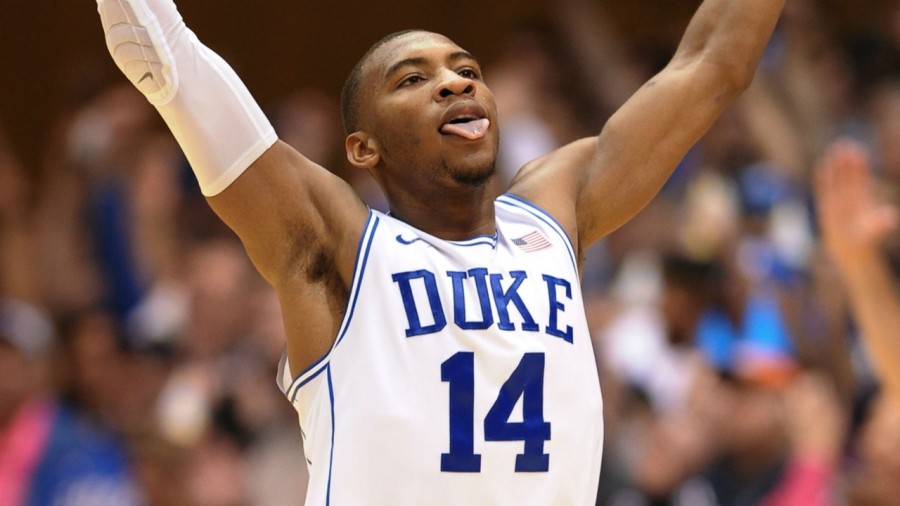 NCAA Basketball Betting News
Pretty much everybody out there is talking about a Duke vs. Kentucky/Wisconsin final in this year’s NCAA Tournament. Does that mean that the No. 7 Michigan State Spartans (27-11) are going to be a walkover for the No. 1 Duke Blue Devils (33-4) on Saturday night when the teams meet in the Final Four at Lucas Oil Stadium in Indianapolis? For the sake of my Spartan friends who’ve cashed in from Michigan State’s perfect 4-0 SU and 4-0 ATS run in the Tournament so far, I certainly hope not.But then again, this is Duke we are talking about—the only top-seeded team in the tournament that has, so far, won and covered the spread in all its Big Dance games this year, a feat that even the undefeated No. 1 Kentucky has not been able to achieve. So, while I don’t expect a blowout win for Duke, it barely looks likely that we’ll be seeing the Spartans in this year’s NCAA Tournament finals. Let’s find out in the NCAAB odds analysis and game preview given below.

Venue: Lucas Oil Stadium, Indianapolis, IndianaDate: Saturday, April 4, 2015Time: 6:09 PM ETTV: TBSSpread: Duke -5
Before we go any further, allow me to give my hearty congratulations to the Spartans for beating their long March Madness odds to make it this far. I mean, like most of you, I’d written off the Spartans from making a deep run into the tournament as soon as I saw them paired to meet Louisville in the Elite Eight. But against all odds, the Spartans beat Louisville 76-70 last Saturday to earn head coach Tom Izzo his seventh Final Four appearance and impressive 13-9 record in NCAA Tournament games where his team is the lower-seeded team–the best win percentage (.591) in this category in the Tourney’s history.Leading the way for Michigan State was veteran Travis Trice who had an all-rounded performance of 17 points, 5 boards and 5 assists, with Denzel Valentine adding 15 points. The fact that the Spartans were able to out-play Louisville’s mean defense (allowing just 59.8 PPG entering the Elite Eight game) means that the duo should have an easier time against Duke’s rather porous defense (ranked at No. 332 in the country in two-points jumpers allowed).Duke must especially be wary of the Spartan’s impressive ability to score transition points. Entering the game against Louisville with an average of 16.3 PPG in transition (4th-best in Big 10), the Spartans torched the Cardinals for 23 transition points, which was more than the combined total of transition points allowed by Louisville in its first 3 tournament games (22).Nonetheless, the Blue Devils should still be able to have the upper hand, particularly in dominating the paint through Jahlil Okafor and wing-play specialist Matt Jones. Also, the fact that Okafor and his fellow freshmen Justise Winslow and Tyus Jones have a good chemistry is also likely to work to Duke’s advantage. Against Gonzaga, the three freshmen combined for 40 of the 66 points scored in the 66-52 win over the Bulldogs on Sunday. Additionally, the freshmen combined for 16 rebounds and 8 dimes.Still, it is worth noting that Okafor (who led Duke in scoring this season with 17.7 PPG) has been struggling in his last two tournament games. Against the Zags, Okafor was the only Duke starter who failed to record a double-digit score, going just 4-of-10 shooting for 9 points, while against Utah, he only posted 6 measly points. Without a solid offensive performance from him this Saturday, the Blue Devils could be in for a rude shock, going by the fact that the Spartans don’t look likely to give too many easy baskets like Gonzaga did.

With its well-sized players and a strong squad that is deeply talented on the offense, it easy to understand why coach Mike Krzyzewski’s team is considered as trendy pick. But even with all that working to their advantage, we all know too well that Duke is not invincible, no wonder it has 4 losses to its name this season. Furthermore, when Duke hosted Michigan during the regular season (on November 18th), the Spartans had a strong showing, in spite of losing 81-71 to the Blue Devils. So, on neutral ground this Saturday, it would not be a surprise if the Michigan State continued its Cinderella March Madness run with another upset. Still, with just one step to head into NCAA championship game, I’m pretty convinced that the Blue Devils will make enough plays to earn themselves a win plus cover, with the total very likely to go OVER.
Older post
Newer post