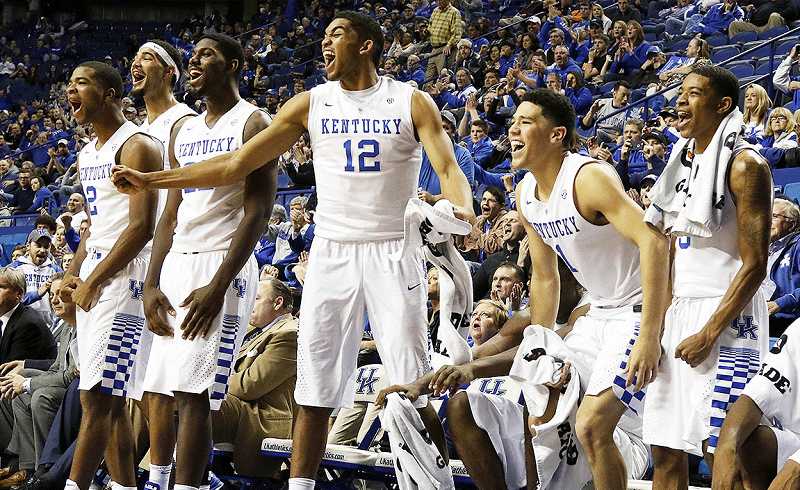 NCAA Basketball Betting News
Here’s an interesting scenario for NCAAB betting fans. Playing basketball for the University of Kentucky might make playing in the National Basketball Association look a little intense by comparison. It wasn’t that long ago that a teenage recruit flew in to Lexington for a visit. He was walking away from the plane when an airport worker stopped him and asked him if he was a basketball player. The young recruit said that he was, said his name and shook the man’s hand. Surprisingly, the worker knew that he was supposed to come for a visit – and knew his high school stats.  Even though the player had not yet been offered a scholarship at Kentucky, the worker wanted his autograph anyway.

What a night. What a team. What a dream these kids are about to live. #SucceedAndProceed pic.twitter.com/WHQ2ef8Qlu

Kentucky basketball is always a hotbed of intensity, but it’s worth asking if the purpose of the program is to give student-athletes a place to develop or to produce an assembly line of basketball players who are ready for the NBA after a season or two. This year, Kentucky steamrolled through the regular season undefeated, and the story line around Lexington is that it’s much tougher to go undefeated as a Wildcat as it was for Wichita State to do it last year, for St. Joe’s to do it in 2004, or even UNLV (1991) or Indiana (1976) to do it. At least, that’s what coach John Calipari would like you to think. He used to tell people that turning the University of Memphis into a power was a major undertaking. He has developed the motto “succeed and proceed” to describe his philosophy…which is a nicer way of saying “one and done,” which is a tag that Calipari’s players have received over time.

If you watch Kentucky play, it’s like waiting for a hurricane to arrive. All of their opponents circle the date when they play Kentucky on the calendar, and the fan base is even more obsessive. The state has developed a hunger for victory that roars each year – even if they won it all the year before. This means, of course, that Kentucky players have it as easy – and as luxurious – as many of their NBA counterparts. When you play basketball for Coach Calipari, you live in the Wildcoat Coal Lodge, a modern dormitory that has its very own chef. You also get to practice in the $30 million Craft Center. You’ll get the promise of lifelong worship from everyone in the state. After all, if you are going to face those massive expectations, then you should get everything that you need, right?

So what is it like to live this life? To be a rock star everywhere you go while you’re in college, while you’re preparing not for graduation but instead to win as much as you can so that you get the attention of the scouts in the NBA. And you know that everyone’s watching. If you go play for Pitt, the city also has a ring of professional sports teams to follow. In Kentucky, there’s Louisville, and there’s Kentucky – and the pressure is intense in both places. But for kids who are 18, 19 and 20, the pressure is a real crucible. Did you beat an awful team by 8? Why didn’t you beat them by 25? If you won 38 games in a season, like the Wildcats in 2012, how on earth did you lose to Vanderbilt and Indiana? So it’s hard to think of Kentucky as a place to get a diploma – instead, it’s a place to become a hero, and to move on to the NBA, or into Kentucky lore if you can’t quite make the jump. Sources: Wikipedia: https://en.wikipedia.org/wiki/John_Calipari NBA.com: http://www.nba.com/
Older post
Newer post