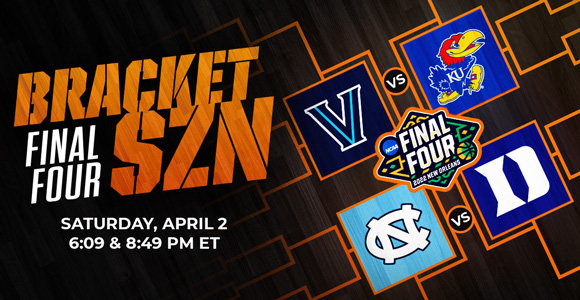 If you didn’t know his name before, you sure do now.  Remy Martin has been the x-factor that has kept Kansas alive in the tournament.  Martin has led the team in points in 3 of their last 4 games and is averaging over 16 points off the bench through the NCAA tournament.  He’s taken the pressure off of the likes of Ochai Agaji and Christian Braun who have consistently come through for the Jayhawks all year.  Agaji is averaging over 18 points per game while Braun is producing at just under 15 per contest. Kansas has been producing at both ends of the court; it’s their offence that has taken control. They’re ranked 7th in offensive efficiency and are shooting 54% from the field.  Add in a defence that since their 9 game win streak began, has kept opponents to fewer than 42% from inside the arc.

The Wildcats are looking for their 3rd championship in 6 years and will have to continue to rely on their defensive game to get it done. Dating back to the end of the regular season, they’ve held eight consecutive opponents to 65 points or fewer.  Their strong point on offence has been scoring when it counts, leading the nation with a record 83% from the free throw line.  They solidified their win against Houston by going a perfect 15-for-15 from the charity line. As usual though, a Villanova team with championship aspirations has run into major injury trouble.  They’ll be without their second leading scorer in Justin Moore who tore his Achilles at the end of Nova’s Elite Eight win over Houston. He leads the team in minutes per game while averaging nearly 15 points, leaving a hole up front for the Wildcats.

The Blue Devils have the best offensive efficiency rating in the nation having scored at least 78 points in each of their last 4 games. They’re led by future NBA lottery pick Paolo Banchero who is putting up over 18 points per game through the NCAA tournament. Duke has the innate ability to lockdown games and hold the lead. We saw an example of this during their Elite Eight match-up with Arkansas where they never trailed in the final 34 minutes. This is Coach Mike Krzyzewski’s 13th final four appearance and his squad will be out for revenge as it was UNC who beat Duke in Coach K’s final home game.

How fitting is it that we get our first ever NCAA tournament matchup between UNC and Duke in Coach K’s final season.  The Tar Heels were dominant in their win over Saint Peter’s, with their rebounding game taking centre stage.  They rank sixth nationally in rebound margin and it starts with Armando Bacot who is a double-double machine.  With his latest performance he is now riding a 6 game double-double streak and is up to 29 on the year.  In their previous meeting with Duke, it took 4 Tar Heels scoring at least 20 points each to spoil the final home game of Coach K’s career.  They’ll need a performance like that and much more if they plan to stop the juggernauts that are the Blue Devils.