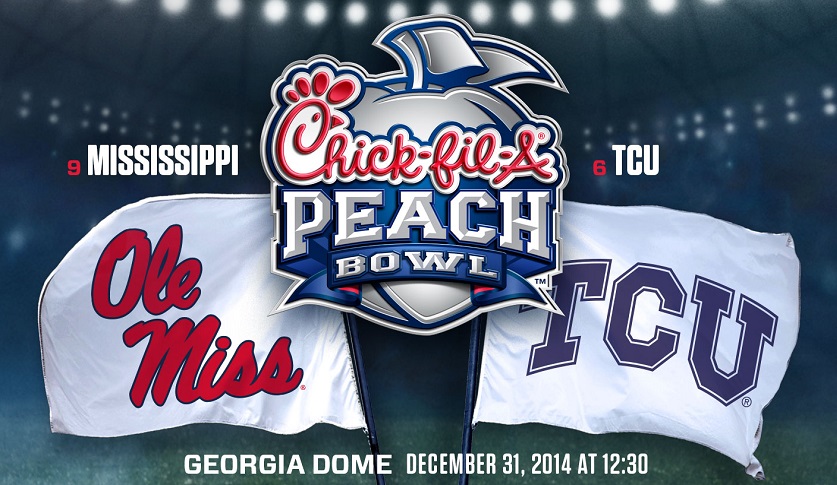 NCAA Football Betting News
No conference in college football was harder this year than the Big 12. Both TCU and Baylor dominated the College Football Lines all season and had legitimate claims for a playoff spot, but both ended up on the outside looking in. What is truly baffling is that TCU was sitting at number 3 before the final game of the season, which they won in convincing fashion. They somehow fell 2 places in spite of that win, with many citing the lack of a Big 12 Championship Game as perhaps being part of the problem.

The “reward” for a fine season is a trip to the Georgia Dome in Atlanta to take part in the Chick-fil-a Bowl against Ole Miss. The Horned Frogs were great all year, playing solid defense, and bringing one of the best offenses in the country to the table every single week. He only blip on their radar all year was a loss to Baylor, which was all the more galling when you consider that they had a 21-point lead with about 11 minutes left in the game. Had TCU gone on to win that one, they would probably be taking part in the inaugural college football playoff.It looked for a while as though Ole Miss might well be representing the SEC in the playoffs, but the wheels came off a little at the end of the season. Injuries and some bad luck played a role in essentially killing of the season for the Rebels, but make no mistake, this is arguably the best 9-3 team in the country. Put Ole Miss in any division other than the SEC West and you are likely looking at a team that would have gone unbeaten.

My Expert Betting Prediction and Pick

It isn’t really a surprise to know that TCU will be making the trip to Atlanta as a 3.5-point favorite. They were a staggering 10-2 ATS on the season, which included an 8-2 mark when placed as the favorite. Furthermore, they were a perfect 3-0 ATS versus non-conference foes during 2014. Ole Miss were 8-4 ATS this year, but if you look back at their recent record in bowl games, they look like a very good bet. Going all the way back to 1992, Ole Miss has won 10 of 11 bowls, going 9-1-1 ATS in the process.Bowl games often come down to a case of who wants it more. TCU has a lot to prove to the nation, and will want to show that they deserved to be in the playoffs. They certainly have more reasons to want to win that Ole Miss, which is why I like TCU to win and cover.
Older post
Newer post