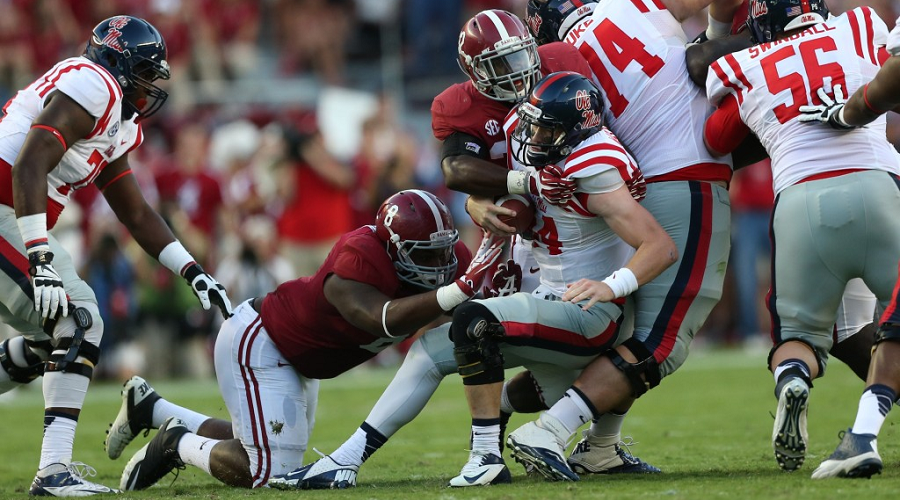 NCAA Football Betting News
The second-ranked Alabama Crimson Tide will look to remain extract some revenge against No. 11 Mississippi when the two SEC rivals square off on Saturday. Better yet, you’re going to find out if Alabama will be successful in its attempts to pay bay Ole Miss for handing them their only regular season loss a year ago. With kickoff time quickly approaching, let’s get started. Don’t forget to check out for more college football betting lines.

How to Bet on Mississippi at Alabama Betting Lines & Game Info

Date/Time: 9:15 PM ET, Saturday, September 19, 2015Location: Bryant-Denny Stadium, Tuscaloosa, AlabamaNCAAF Odds: Alabama -6.5Over/Under: 51.5Quarterback Chad Kelly put on a show by completing 20 of 25 passes for 346 yards with four touchdowns, effectively ending what had been a tight quarterback race for the Rebels.“I thought it was a really solid day for him,” head coach Hugh Freeze said of his quarterback.Kelly led the Rebels to seven touchdowns on all seven of his drives. The strong-armed junior hooked with junior wide receiver Quincy Adeboyejo five times for 120 yards and all three of his touchdowns.“Chad — his deep balls are one of the better ones I’ve ever encountered,” Adeboyejo said. “He’s got really good touch on them.”Mississippi also topped the 70-point plateau in its regular season opener.“The sky’s the limit (for the offense),” Kelly said. “We just have to make sure we’re on the same page the whole game. Don’t turn it over. If we keep playing the way we’re doing, it’s going to be a special season.”Alabama (2-0 SU, 1-1 ATS) didn’t play particularly well, but managed to beat overmatched Middle Tennessee 37-10 in Week 2, though they failed to cover the spread as huge 34.5-point favorites. Young quarterback Jake Coker put a stranglehold on the starting quarterback position by completing 15 of 26 passes for 214 yards with one touchdown and one interception.It was running back Derrick Henry that carried the Tide to victory as he rushed 18 times for 96 yards and scored three touchdowns for the second straight game. Henry has three TDs in each of Alabama’s first two games and gained 96 yards.“When you play games like this, if you don’t have the right intensity and the right toughness, you’re going to get exposed,” said Alabama head coach Nick Saban. “These teams that you play are all good enough to expose you.”Coker started for the second straight game but gave way to Cooper Bateman for the second half.“We started Jake two games in a row, I think there’s a reason for that,” Saban said.Mississippi (2-0 SU, 2-0 ATS) beat up on Fresno State in is stunning 73-21 Week 2 win over the Bulldogs to easily cover the spread as whopping 33-point home favorites.Game Analysis: 56 percent of the betting public likes Alabama to cover the spread as nearly touchdown home favorites, but I don’t think that’s going to be the case in this SEC showdown.I love the way Mississippi plays defense under Hugh Freeze and I believe that Chad Kelly is already as good as former Rebels signal-caller Bo Wallace was last season when he helped Mississippi hand Alabama its only loss of the regular season.Mississippi is 4-0-1 ATS in their last five games in the month of September and 5-2-1 ATS in their last eight games following an ATS win. Conversely, the Crimson Tide are just 6-13-1 ATS in their last 20 games overall and 3-7 ATS in their last 10 games in September.

Here Are Three More Key Trends Backing Up My Pick.