Written by Jordan Walters on September 16, 2015

NCAA Football Betting News
When NCAAF Betting fans think about impact players for the TCU Horned Frogs this season, the list probably begins with Heisman Trophy candidate quarterback Trevone Boykin. However, one of the most promising contributors on the defensive side is freshman linebacker Mike Freeze, who has taken a leave of absence from the team. Freeze racked up seven tackles as TCU beat Minnesota 23-17 to open their season last week. He had enrolled early and had impressed the coaches enough during spring practice to get some significant playing time.  The Horned Frogs already had depth issues at linebacker after junior Sammy Douglas went down for the season as the result of an unspecified injury this past Tuesday. On Wednesday, head coach Gary Patterson announced that Douglas would redshirt this year to retain his eligibility for another year.  Freeze and Douglas were both in the starting lineup against Minnesota. Now, TCU will have to pick two new starters. Patterson has announced that another freshman, Montrel Wilson, will fill one of the starting spots. Douglas had the most experience of any of the linebackers on the team. Every other listed linebacker is either a freshman or a sophomore. Last season, TCU graduated its three top linebackers. The defense featured seven new starters in the opener against Minnesota. There shouldn’t be too much problem this week, as the No. 2-ranked Frogs take on Stephen F. Austin in the home opener.  Freeze’s departure does not have to do with disciplinary reasons, and Patterson does not currently know how long the talented freshman will be out. However, with Freeze and Douglas out, that is now four starters that the Frogs have already lost from their original lineup. Davion Pearson is out with an injury, as is defensive end James McFarland, who broke a toe.  Again, the Horned Frogs should be all right this week – and next, as Southern Methodist comes to Fort Worth. However, that’s already a dangerously thin defense, and the Frogs haven’t yet begun their Big 12 slate. While Patterson has received rave reviews for his innovative 4-2-5 defensive scheme that involves three separate play calls, if he doesn’t have the players in place, the Horned Frogs could struggle on defense. Given how hard the team has fought to reach its #2 ranking in the nation, it would be a shame for some injuries and a personal matter to threaten what Patterson has going on. 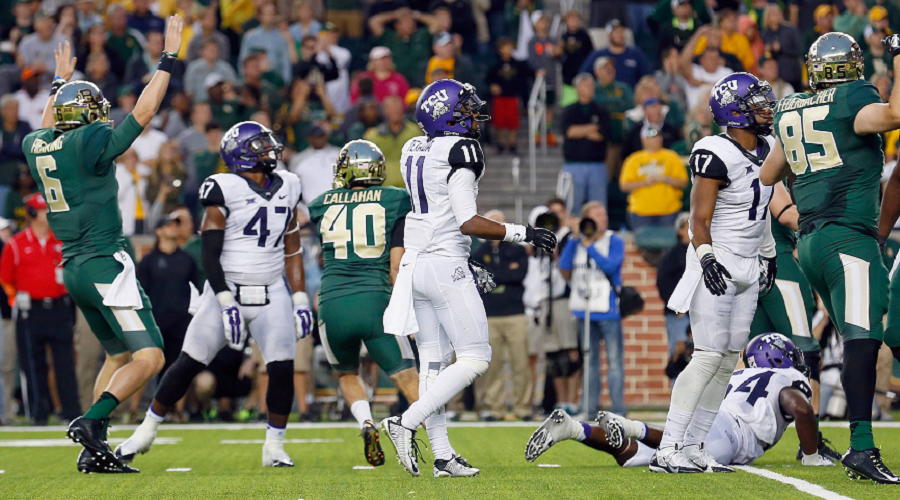 After TCU takes on Southern Methodist, the Frogs travel to Texas Tech and host Texas. Things get interesting when they play at Kansas State and then host West Virginia a couple of weeks later. The rematch of last year’s debacle in Waco takes place on the last day of the regular season this year, as Baylor comes to Fort Worth on the day after Thanksgiving. Trips to Oklahoma State and Oklahoma could also be treacherous. Hopefully some of the injuries will have healed by the time the back-loaded Frogs’ schedule really gets tough to navigate. For now, though, TCU has some time to recuperate.
Older post
Newer post