NCAA Football Betting News
It hasn’t been that long ago since Dak Prescott was the darling of the SEC. His Mississippi State Bulldogs were 9-0, and the team had the #1 ranking in the nation. They were the first team ever to appear at the top spot in a College Football Playoff poll.Of course, after losses to Alabama and Ole Miss, Mississippi State was headed to a nice bowl game but nowhere near that national semifinal that they dreamed they would be playing in.Fast forward to this spring, Prescott is still obviously the BMOC. When he goes places like a Mississippi State softball game, even if he watches the game from behind the outfield fence, the crowds of NCAAF betting fans gather around him. When one of them finally becomes bold enough to come up and ask him for an autograph, he is willing and friendly.

Because we all know who Dak Prescott is. He changed Starkville, Mississippi, to Starkvegas, making it a place to be rather than the joke of the SEC West. However, being the biggest thing in town is new for him. Starkville only has 24,000 residents who don’t go to Mississippi State. The other 20,000 people who live there are all Bulldogs. This means that anywhere Dak Prescott goes, people know who he is, and people want to come and talk to him.That’s why Prescott is taking all online courses this spring, and why he ventures out at 9:00 at night for his haircuts. In an interview with SI.com, he said, “I wouldn’t trade it for anything…[but] I guess I just want to be able to go to Walmart and not be bothered.”Prescott lives off-campus with junior tight end Gus Walley in a two-bedroom apartment that costs him $290 per month. If you look around, you’ll see the head of a buck that Walley shot and a shower curtain decorated with the Teenage Mutant Ninja Turtles. However, Prescott is not one who likes to stay at home, night after night. 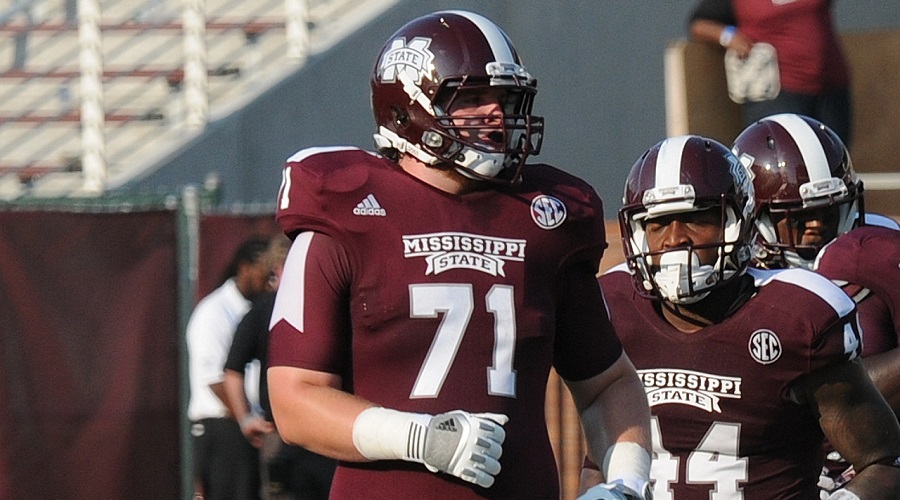 So he wanders out now and then. He goes to Bulldog sporting events, but he tries to get there right at game time so he doesn’t attract attention, and he sometimes has to take a posse of teammates with him to help him get out through the huge crowds that gather when someone notices him. Eating meals in the student union has become a thing of the past.Sometimes he will go to an off-campus watering hole such as Rick’s Cafe. Everywhere he goes, though, he has to watch himself. It’s not like he can get drunk anymore – anyone who’s followed the escapades of Johnny Football knows how tightly the microscope can focus. A trip to Panama City Beach for spring break ended up with a group of men attacking Prescott and his friends in a parking lot – and Prescott ending up in a Starkville emergency room.So for Prescott, discretion is the name of the game. He has a shot at another great season, even though the SEC Media Days poll put the Bulldogs last in the SEC West. After college, the NFL may well come calling. For now, though, Prescott can’t do what other college students do. That’s a hard lesson, but the path for him may well bring the rewards that such discipline earns.Sources:Wikipedia.org (https://en.wikipedia.org/wiki/Dak_Prescott)Al.com (http://www.al.com/mediadays/)
Older post
Newer post