NCAA Football Betting News
Rather than declare for the NFL draft after leading the Buckeyes to a national title and becoming a NCAA betting sensation, Ohio State’s backup quarterback Cardale Jones surprisingly opted to return to school and compete for a starting role in the team. The decision to stay in school means that Jones will be fighting against former two-time Big Ten Offensive Player of the Year Braxton Miller (who was set to be the starter in 2014, but suffered a season-ending injury in August) and redshirt sophomore J.T. Barrett, who beat Jones to the starting role last year after Miller’s injury. Barrett went on to have a solid run, going 11-1 as a starter before breaking his ankle in the regular-season finale against Michigan, which then paved the way for Jones to take over in the playoffs and lead Ohio State to the national championship.

Looking back at his decision to stay in school, Jones admits that he may have rushed into the decision, but maintains that he has no regrets about it, whether or not he gets the starting role.Miller, who has already graduated and was expected to transfer to another school for a starting role, is still in Ohio State and Buckeyes coach Urban Meyer said recently that he expects the senior to stay put with the defending college football champs.Barrett’s name has somehow taken a backseat to all the superstar talks about Jones and Miller, but with all the hype aside, the Texas product is believed to have the most all-rounded skill set to consistently deliver wins and give the best starting option in the team.With the three All-America caliber QBs having respectable reputations and none of them looking to leaving the Bucks’ camp, who will get the starting role in the team when the new season begins?

FIGHTING FOR THE STARTING ROLE

Making a Case for Cardale Jones

Weighing in at 6-foot-5 and 250 pounds, Cardale Jones come with the physical attributes that can make him a formidable QB in college and the NFL, as well. His huge arms are battle-tested, as he led Ohio to upset victories over Wisconsin in the Big Ten Championship Game, Alabama in the College Football Playoff semifinals, and then Oregon in the national championship game. More notably, Jones got the advantage of taking almost all the snaps during spring camp, the Scarlet and Gray spring game, where he completed 19 of 42 passes for 304 yards, 2 TDs and 2 interceptions. Miller and Barrett didn’t play at that time, as they were both still rehabbing, though both of them are expected to be fully healthy in time for the new season.As a concerning flaw in his game, Jones is not much of a runner like Miller and Barrett, which would force Meyer to tweak his offense if he is to be a consistent starter—something that would complicate season-long offensive plans for the team. In addition, during the spring work, Jones mostly threw deep balls and only one of his three long throws connected to Corey Smith, necessitating an improved accuracy in his game. Considering such factors, and not forgetting that he Jones less experienced (he had just 19 total pass attempts in his career before the Wisconsin game), Meyer could decide to opt against him, even if he was the team’s national hero.

Making a Case for Braxton Miller

Prior to his injury last year, Miller was the top Heisman Candidate in the nation and was largely expected to have an explosive season after becoming the Big 10 offensive player of the year in 2012 and 2013. Other than his solid quarterbacking skills, Miller is a utility player, who can be used as change-of-pace QB, receiver, running back and even H-back. These dynamic skills could prove vital in the team if he is not selected as the lead quarterback for the team.The biggest concern for Miller will be his health, since he is coming off a long injury, which could easily put him down again in 2015 if triggered wrongly. That, probably, is the reason Meyer has decided to keep his options open. Moreover, although Meyer expects him to stay, Miller could still decide to transfer to another team, especially with teams like Alabama and FSU ready to pounce on any viable options in the quarterback department.

Making a Case for J.T. Barrett

Entering last season, J.T. Barrett was relatively unknown, so there was a lot of skepticism about him getting the starting role. Come the end of the season, everyone was full of praise about his phenomenal season and cursing the bad luck that saw him suffer a season-ending injury against Michigan at the end of the regular season. And looking at his numbers in 2014, you would be a fool not to be impressed or even want to trust him with the starting job. Besides the 11-1 record as a starter, Barrett finished with school-record totals of 3,772 total yards and a whopping 45 touchdowns. Mind you, the touchdown total was a Big Ten record in 2014. And of those total yards, 2,834 yards came from his strong arms, with a school-record 34 touchdowns also resulting from his throws. The remaining 938 yards and 11 touchdowns, as you’d expect, came from his solid ground. So, although he didn’t manage to play in the playoffs, his excellent season was great enough to earn him the Big Ten Freshman of the year award, while he was also voted in as Big Ten’s Freshman of the Week for a conference-record 7 times. He also went on to finish in the 2014 Heisman voting. One can only wonder what more he would have achieved if he went on to play in the playoffs. 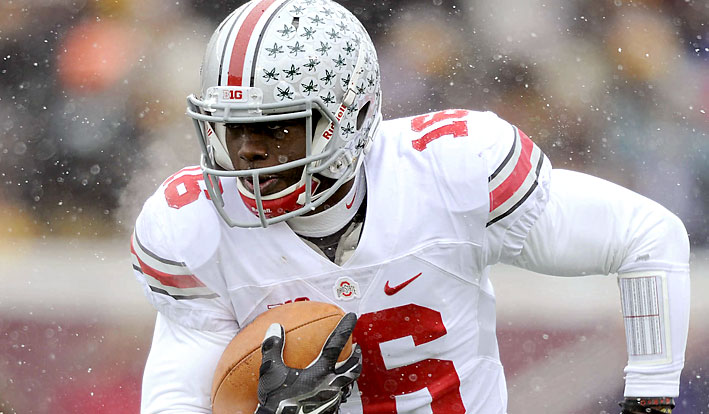 With his balanced offensive potential, there is no doubt that Barrett could provide one hell of playmaker in Ohio State’s offense. College Football Guru Phil Steele confirms this strong assertion in his All-Conference and All-America preseason list released recently. According to Steele, 8 Buckeyes will make up his All-American team, with Barrett predicted to be an All-Big Ten second teamer behind Michigan State’s Connor Cook. If you asked me, I’d say getting such a big vote of confidence from someone who is often spot-on with his calculations counts a great deal to Barrett’s favor. So, although Barrett still needs to clean up his decision making and avoid complacency that often comes with overconfidence, I am in total agreement that the Bucks would be better off with him as a starter.

And the Winner is…?

Like Miller, Barrett will be coming off an injury, hence the understandable decision to keep Jones in the mix. Personally, I believe Miller will find his way out of the team before the new season starts. But in the event that he stays in Ohio State, then he will probably be used in the alternative positions we already mentioned, with Barrett as the starter and Jones as his backup. All these predictions are, of course, subject to the health of Miller and Barrett, so be sure to keep yourself well-updated on the status of those two QBs. All in all, expect a solid season by the Bucks in 2015, as Meyer uses his experience to get the best out of the three admirably talented playmakers.
Older post
Newer post