NCAA Football Betting News
You might be one of those online betting fans who thinks that Braxton Miller sliding over to wide receiver will make the Ohio State Buckeyes unstoppable. If so, then you are likely to think that the Buckeyes will run the table, easily mowing through the B1G this year and ending up right back in the College Football Playoff.

Well, while Braxton Miller is an immensely talented athlete, changing positions in that way takes a considerable amount of preparation and precision. And what exactly do you think opposing secondaries are going to do once they see Miller heading over the middle, knowing that his shoulder is still healing? The collisions could be intense, and if Miller is intimidated, that part of the offense could suffer.Another collision that people may not be foreseeing yet involves the Buckeyes’ meeting with the Virginia Tech Hokies on Labor Day night. Last year, when Ohio State had Virginia Tech at home, the Hokies upset the mighty Buckeyes – the only team to beat Ohio state last year. This year, the matchup takes place at Virginia Tech, and Vegas has the Buckeyes as a double-digit favorite.It’s true that Virginia Tech is unbelievably inconsistent. The same team that upset Ohio State lost 6-3 in double overtime to Wake Forest. If they hadn’t scored that last-minute touchdown against Virginia, they wouldn’t have made a bowl game. The offense, in other words, was awful. But the defense ranked #11 according to Football Outsiders, and they have Luther Maddy and Brandon Facyson, formerly All-ACC palyers who missed most of last year.So what if the defense can stymie Ohio State throughout the game? Imagine if it’s 14-13 going into the fourth quarter – and Virginia Tech is leading thanks to a defensive touchdown? Can you imagine what the stadium dynamic would be like? That stadium in Blacksburg will turn into a chaotic den – and could become a house of horrors if the Buckeyes crumble under the pressure. What was supposed to be a coming-out party for Braxton Miller’s new position and the quarterback tandem of J.T. Barrett and Cardale Jones could instead turn into Ohio State’s early burial. Can you imagine what the social media onslaught on Twitter will be like as each minute goes by without an Ohio State score? 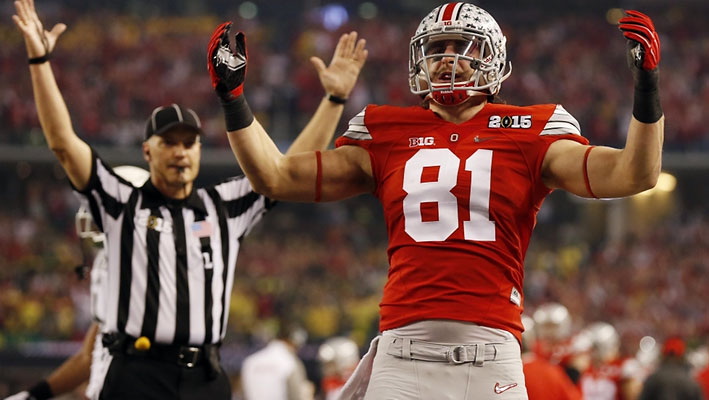 It will be interesting to see if Ohio State coach Urban Meyer cuts down on the quarterback run now that he only has two outstanding quarterbacks at his disposal – but neither with the outstanding speed of Braxton Miller. In 2012, Miller had at least 20 carries in half of the games, and in 2013 he had at least 16 carries in nine games. But if you look at the playoff games last year, Meyer had Cardale Jones run 17 times against the Crimson Tide and then 21 against Oregon in the title game. One thing that many coaches won’t admit is that quarterbacks get hurt much more frequently when they get nailed by a huge pass rusher than they do when they are carrying the ball. So it’s likely that he will keep using his quarterbacks on planned runs as part of his offensive scheme.
Older post
Newer post