NCAA Football Betting News
The Pac-12 South was one of the most stiffly contested divisions in 2014, with the UCLA Bruins, Arizona State Sun Devils and USC Bruins finishing tied with a 6-3 conference record and the Wildcats just about managing to top the division with a 7-2 conference record. With the continuous offseason changes that have taken place in the Pac-12 South, which team will be emerging as the truest king of the division? Read on as we give a brief breakdown of the NCAAF betting odds in this dicey division. Arizona State Sun Devils After collecting 20 wins in the last two years, the best two-year record since 1996-97 season, it all looks like coach Todd Graham and the Sun Devils will be force to reckon with in the South in 2015. But more importantly, the Sun Devils have a lethal partnership in QB Mike Bercovici and running back cum wide receiver D.J. Foster, which should see them feature positively in the division this year. As a concern though, the Sun Devils lost star receiver Jaelen Strong, their best pass rusher in defensive end Marcus Hardison their lead tackler in safety Damarious Randall, crucial weapons that could leave the wakened on both the offensive and defensive lines. Arizona Wildcats With the explosive trio of QB Anu Solomon, RB Nick Wilson and WR Cayleb Jones returning from Arizona’s highly-rated offense in 2014, the Wildcats figure to be a top-5 offensive unit in the Pac 12 conference. Defensively, losing three starting tackles (including Mickey Baucus and Fabbians Ebbele) could have been an issue, but the Wildcats still have top linebacker Scooby Wright leading the defense. Added to Cal transfer Freddie Tagaloa and returning guards Cayman Bundage and Jacob Alsadek, the defense should be able to take care of things quite comfortably. Barring any major injuries, the Cats, (who are the defending Pac-12 South Champs) should thus be a neck above the rest in the quest for the divisional title once again. UCLA Bruins Entering 2015 with a whopping 18 starters returning from last year, the Bruins have no excuse not to be among the crème de la crème South competitors in 2015. Most notable in the list of returning starters include star running back Paul Perkins and the multi-skilled Myles Jack. It should, however, be noted that the Bruins will be without QB Brett Hundley and last year’s Butkus Award winner, linebacker Eric Hendricks, who will be tough to replace. Even so, Coach Jim Mora named an abled replacement for Hundley in true freshman QB Josh Rosen, while the Bruins had a decent 2015 recruiting class. In addition, UCLA has the easiest 2015 schedule of the Pac-12 teams by NCAA rankings, placed at No. 82 in the nation in toughness. That schedule should motivate their agenda of seeking the Pac-12 South title. USC Trojans After a strong first season of 9-4 (6-3) for coach Steve Sarkisian, the Trojans are a team a sleeper’s favorite team, particularly after a solid recruitment, where they claimed four 5-star newbies (including three in the defense), earning themselves the second-best ranking in recruitment in the country behind Alabama. 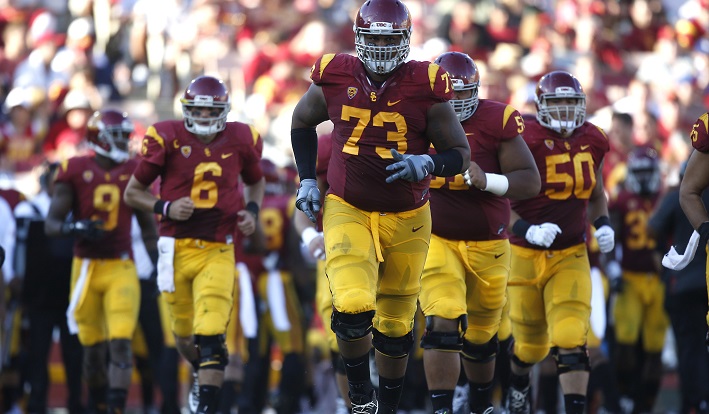 Even more crucially, Southern Cal is returning with solid class from 2014, led by arguably the best pocket passer in the nation in Cody Kessler, who completed nearly 70 percent of his passes for 39 touchdowns and 3,826 yards against just five interceptions last season. Therefore, even with the loss of RB Buck Allen, tackle Leonard Williams and WR Nelson Agholor, the returning starters and strong recruits should be able to keep the Trojans competitive, if not make them better than they were in 2014. Note on Utah and Colorado Coming off a season where they went 2-10 (0-9), the Colorado Buffaloes are a non-factor in the division. For Utah, Running back Devontae Booker and Quarterback Travis Wilson are a talented duo, but the loss of the team’s defensive coordinator, offensive coordinator and defensive line coach in the offseason, coupled with a brutal schedule in 2015, makes it difficult to trust the Utes to have a good 2015 season, irrespective of their 9-4 (5-4) record in 2014. Predicting the Winner of the Pac-12 South Division in 2015  For my predicted top 2 teams in the division, I’d go with either Arizona or Arizona State, as they both have good coaches and return with good quarterbacks. But based on Arizona State’s rather worn-out defense, I believe the Wildcats are deserved favorites to win the division once again. However, if you are looking for a solid sleeper pick to win the Pac-12 South title, then the Trojans offer the best option, taking into account their solid play in the quarterback, a great recruiting class, and an amazing coach leading the team. Either way, expect another feistily interesting fight in this division. Sources: Wikipedia.org (https://en.wikipedia.org/wiki/Paul_Perkins) ESPN.go.com (http://espn.go.com/college-football/player/_/id/3122866/devontae-booker)
Older post
Newer post