NCAA Football Betting News
The new college football season is set to welcome a new batch of freshmen that will be starting the college phase of their careers. These new recruits come with a lot of optimism, though (as usual), not all of them will cope with the pressure that the game demands. Nonetheless, here are some of the freshmen, who look to have the ability to rise above the odds to succeed in the upcoming 2015/16 NCAAF betting season.Calvin Ridley, WR, AlabamaEven though Alabama might be experiencing some uncertainties at the QB position, the team can take solace in freshman Ridley, who is the top receiving recruit in the nation. Bama lost some of its offensive receiving corps last season, including Amari Cooper. Having transformed to a more pass-oriented offense in 2014, there is no doubt that Alabama offensive coordinator Lane Kiffin will be able to get the best out of the talented Ridley, who recorded 1,131 yards and 12 TDs in his final full year of high school.

Josh Rosen, QB, UCLAThe freshman QB will be playing behind an experienced UCLA offensive line that returns all five starters, as well as top rusher in Paul Perkins, which should encourage efficiency. Rosen also has immense talent, something that saw him rank at No. 2 overall among new recruits, according to the Rivals.com. As a senior at St. John Bosco High, Rosen passed for 3,186 yards with 29 TDs against just four interceptions. Predictably, he should be a success this season, as he is surrounded by enough talents in UCLA’s offense.Martez Ivey, OT, FloridaIvey choose Florida over Auburn in search of more game time. Florida lost so much talent during the offseason and he was guaranteed more play time as a starter. More notably, Martez Ivey was ranked as the No.1 offensive lineman in his class and is optimistic that he can help Florida’s offense to standout in the Southeastern Conference. He will also be bringing a much-needed dose of quality on the defense that will essentially be starting from scratch this season, offering a good chance for growth alongside other teammates.Kahlil McKenzie, DT, TennesseeTennessee head coach Butch Jones recruited McKenzie, the No.1 defensive tackle in this year’s class, hoping he could help cure some of illnesses in the Vols D-line. McKenzie had 12 sacks with 74 tackles as a high school junior, and is projected to have a fast learning curve in the SEC, as he is surrounded by some solid defensive pieces. With his undeniable talent and good physicality, McKenzie looks to a perfect fit to help lift the Vols higher in the SEC this year. 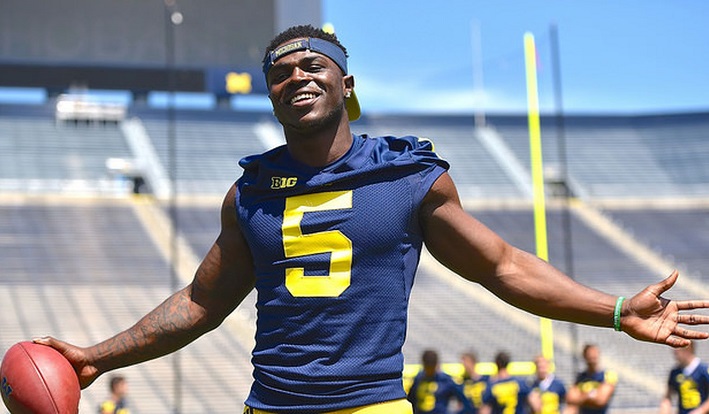 Jabrill Peppers, Safety, MichiganPeppers did not get a chance to show off his talent that made him No.3 overall recruit in the 2014 class. He was limited to just three games due to two separate leg injuries last season. Nonetheless, the redshirt freshman intends to shift positions this year from corner to safety. He will be lucky to have Coach Jim Harbaugh to guide him through that transition in Ann Arbor. Considering Michigan was quite solid last season in the D, as the school finished No.7 in total defense (311 yards allowed per game), the team should even get better with Pepper’s presence.Iman Marshall, CB, USCMarshall was a top CB in the 2015 class, tipped as one of the hottest players ready for life in college. He has the speed, size and the physicality to go it against the top receivers in the Pac-12. Iman Marshall brings competition in the team, so it will be upon the starters to step up and improve their play, or risk being replaced by the super-talented Marshall.Trent Thompson, DT, GeorgiaThompson will be looking to prove to the world why he was the No.1 overall recruit this season. He is guaranteed to receive some solid playing time in Georgia’s D-line due to a couple of key offseason departures. His stellar ability to plug running holes and get into the backfield will be very crucial for the Bulldogs, especially in top games that against high-powered offensive teams in the SEC like Auburn and Alabama.Sources:Wikipedia.org (https://en.wikipedia.org/wiki/Martez_Ivey)Sports.Yahoo.com (http://sports.yahoo.com/ncaa/football/recruiting/player-Iman-Marshall-138351)
Older post
Newer post