NCAA Football Betting News
The coming college football season will undeniably feature some of the best juniors in the NCAAF betting history. The juniors seem to be loaded with talent from award-winners to do-it-all players and the future national championship-winning sportsmen. With some college football experience already under their belts, these junior players will have some extra edge over the opposition, as well as a chance to improve, should they decide to play their senior year. Below are some of the top junior players to watch out for ahead of the 2015/16 NCAAF campaign.Ezekiel Elliott, RB, Ohio StateOne of the reasons the Bucks had a feared offense in 2014 was a strong running game, championed by Elliot, who was a beast in the regular season and an absolute monster in the postseason games. In the three games against Wisconsin, Alabama and Oregon, Elliot rushed for 696 yards and 8 TDs. Mind you, he played those games with an injured wrist. With the running back coming in 2015 healthy and playing in Ohio State’s explosive offense as one of the favorites to win the Heisman Trophy Award, another strong (if not better) performance can be expected from him.Myles Jack, LB, UCLAJack has been very instrumental for the Bruins, rising to prominence because of his splendid 2014. The linebacker had a massive contribution last year, as he recorded 87 tackles, eight tackles for loss, seven broken up passes and an interception. What makes the linebacker even more outstanding is his ability to make key contributions offensively, as he managed to score three rushing TDs and scored a two-point conversation for good measure. UCLA will rely on him this year to bring some creativity, particularly against tough D-lines where the offense might struggle to break through.Scooby Wright III, LB, ArizonaScooby Wright III has developed into a fine LB for the Wildcats since his recruitment in 2013. He finished first in the nation last season with 163 tackles, 29 tackles for loss and forced six fumbles. In addition, Wright III was ranked third overall with 14 sacks, which saw him win the Nagurski Lombardi and Bednarik awards for his remarkable 2014 season as a one-man wrecking machine in the Arizona D-line. The Wildcats eventually won their first Pac-12 South title since 1998 with his help. He is also projected as the No.3 inside linebacker in the 2017 NFL Draft, and if he can maintain his efficiency this season, he will be selling like hot cake when he declares for the NFL.Robert Nkemdiche, DT, Ole MissPlaying in his two seasons at the Ole Miss, Nkemdiche has been an excellent performer. The former No.1 overall recruit from 2013 racked up 69 total tackles with 12 tackles for loss and four sacks last year. He was also named to the All-SEC team in 2014, a career achievement that gives Ole Miss Fans high expectations that he will be motivated to do more in the upcoming season.Shock Linwood, RB, BaylorThis season, the entire Baylor team will be looking up to RB Shock Linwood to energize the offense with his explosive runs. The running back impressed last campaign, running for 1,252 yards with 16 TDs, including four games of 100-plus yards. With Baylor’s QB position up for grabs and the team needing someone to reliable man in the offense, Linwood (who averaged five yards per carry in 2014) will be the go-to guy. 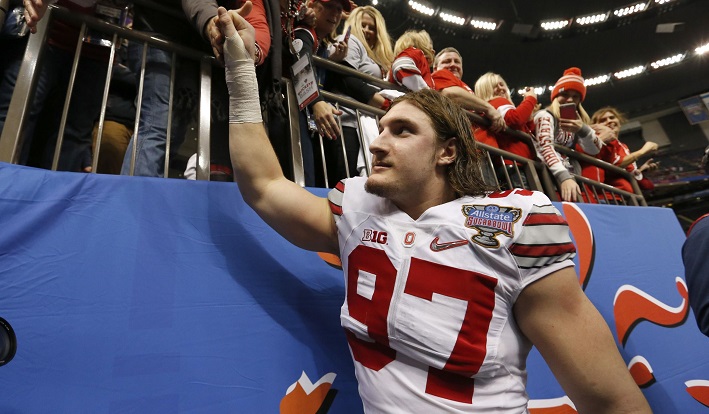 Joey Bosa, DE, Ohio StateBosa was a familiar face in Ohio State’s championship-winning run. The defensive end racked up 13 sacks with 21 tackles for loss. In addition, he returned a fumble for a TD in the Big Ten Championship Game against Wisconsin. After being selected in the First Team All-Big Ten and winning the Smith-Brown Defensive Lineman of the Year award last season, Bosa is definitely poised for a big junior year ahead of him.Rashard Higgins, WR, Colorado StateThough Colorado State is not that big a team, Higgins has to make it on this list. He led the FBS with 1,750 receiving yards and 17 TDs in 2014, and he was nearly a perfect target, snatching 92 percent of the balls thrown to him. This year, Higgins could get even better as he will be playing alongside QB Coleman Key and under new head coach in Mike Bobo, both who are likely to get best out of him. It will be hard for him to repeat his numbers from last year, but he should still be a player to watch.Sources:247Sports.com (http://247sports.com/Player/Scooby-Wright-21886)ESPN.go.com (http://espn.go.com/college-football/player/_/id/550009/shock-linwood)
Older post
Newer post