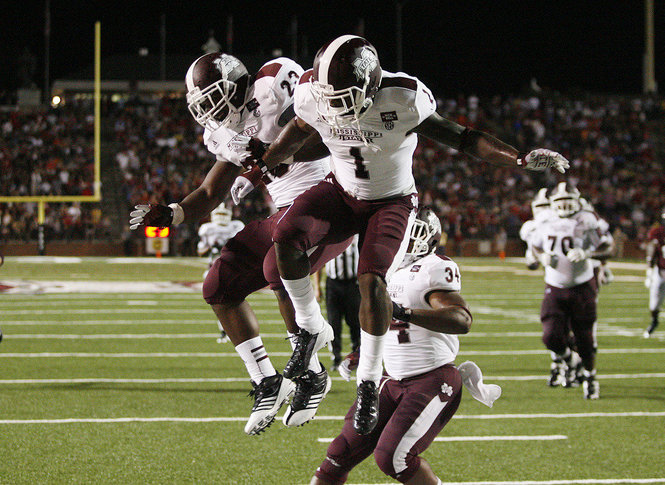 Written by Jordan Walters on November 3, 2014

NCAA Football Betting News
In what is bound to turn out to be a season-defining week for many teams, especially in regard to making it to the playoff, Week 10 of College Football Betting was full of wildly close calls. In a good number of the games, the results went pretty much as expected, but in large a majority of the remaining games, close calls greatly defined the scope of Saturday’s results. Here are the week’s victims and survivors, so let’s review some of the highlights and check their football odds for the coming week.The Rebels Dishearteningly Lose to the TigersThe Rebels saw their playoff dreams suffered a shattering setback after WR Laquon Treadwell was judged to have fumbled the ball on the goal line in the final minutes of the game. Initially, officials had ruled the play for a touchdown, but on further review through instant replay, the call was reversed to a fumble. And since the Tigers’ Cassanova McKinzy had recovered the ball after the fumble for a touch back, the game ended 35-31 in favor of Auburn. To make matters worse, Treadwell suffered a horrible leg injury.The Tigers, who are now 7-1, play the Texas A&M Aggies on Saturday in a game that can get them closer the conference title. Meanwhile, the Rebels will try to leave their devastating loss behind and get back on track against the Presbyterian Blue Hose.Texas A&M vs. Auburn TigersSaturday, November 8, 3:30 PMJordan-Hare Stadium, Auburn, AlabamaGame OddsTEXAS A&M: +21½-110AUBURN: -21½-110Presbyterian Blue Hose vs. Ole Miss RebelsSaturday, November 8, 12:00 PMVaught-Hemingway Stadium at Hollingsworth Field, Oxford, MississippiGame Odds: TBAThe Ducks Finally Solve the Cardinal ProblemAfter two successive defeats to the Cardinal hindered their playoff hopes in the past two seasons, the Ducks finally found a winning formula and beat Stanford in splendid fashion. Oregon’s Heisman Trophy candidate Marcus Mariota was the hero of the day completing 19 of 30 passes for 258 yards with two TDs and an interception while also running nine times for 85 yards and two scores. A massive win for the 8-1 Oregon Ducks who are within touching distance of the Pac-12 division championship game, but first they have to travel to Salt Lake and take on the Utah Utes in one of the toughest games they face this season.Oregon Ducks vs Utah UtesSaturday, November 8, 10:00 PMRice-Eccles Stadium, Salt Lake City, UtahGame Odds:OREGON: -9½-110UTAH: +9½-110Mississippi State Still UnbeatenIn spite of suffering scares in the game against Arkansas, the Bulldogs pulled a 17-10 win to stay unbeaten. Heisman Trophy contender Dak Prescott was not in his usual best for Mississippi, but still threw a career-high 331 yards while completing 18 of 27 passes for a TD and two interceptions. Barely a dominating performance by the Bulldogs, but a big win nonetheless.UTM Skyhawks vs Mississippi State BulldogsSaturday, November 8, 4:00 PMDavis Wade Stadium at Scott Field, Starkville, MississippiOdds: TBAACC Narrows Down to Two Teams, at the MomentAfter surprisingly trailing the game by 21 points, Florida State showed why they are the defending national champions by rallying back to win 42-31 over Louisville. Despite being handed a career-high three interceptions, Heisman Trophy winner Jameis Winston still managed to complete 25 of 48 passes for 401 yards and three TDs. The Seminoles have an easy task ahead when they play the Virginia Cavaliers in Tallahassee.Virginia Cavaliers vs FSU SeminolesSaturday, November 8, 6:30 PMBobby Bowden Field at Doak Campbell Stadium, Tallahassee, FloridaGame Odds:VIRGINIA: +18-110FLORIDA STATE: -18-110As earlier analyzed and predicted, Duke looks to be on course for the ACC title game after winning 51-48 during double overtime in a hotly contested game against Pittsburgh. As things stand, Duke is the only one-loss team left in the ACC, besides the undefeated Florida State. Since Duke holds the head-to-head lead over Georgia Tech (who also have three ACC wins), a win out in the remaining games means Duke is likely to face the Seminoles in the title game, but first, they have to defeat the Syracuse Orange, who are coming from a loss to NC State.Duke Blue Devils vs Syracuse OrangeSaturday, November 8,12:30 PM ETCarrier Dome, SyracuseGame Odds:DUKE: -3½-110SYRACUSE: +3½-110Other Noteworthy Games
Older post
Newer post