NCAA Football Betting News
While the phrase ‘Duke vs. North Carolina’ immediately brings to mind images of each school’s legendary basketball programs, the fact of the matter is that the two in-state rivals do meet on the gridiron on an annual basis as well.NCAAF betting fans that know about this perennial pairing, refer to this yearly clash as the ‘Victory Bell’ battle. For those that don’t know about this lengthy rivalry, you’re about to find out!The Victory Bell is the traveling trophy awarded to the victor of yearly matchup between the Duke University Blue Devils and the University of North Carolina Tar Heels. Duke and North Carolina had their first-ever meeting way back in 1888 and the lengthy series has been played every year since 1922.

What is the Victory Bell Rivalry?

As the story goes, long ago, two opposing cheerleaders named Norman Sper of North Carolina and Loring Jones of Duke, were two of the biggest driving forces behind the formation of the Victory Bell itself. Jones designed the model and Sper obtained the Bell from an old railroad train.Tar Heels fans will always be able to say that their school won the inaugural Victory Bell matchup – and in emphatic fashion – by shutting out the Blue Devils 20-0 back in 1948 in a game played at Kenan Memorial Stadium.In recent years, the winner of the annual matchup has been allowed to spray paint the platform of the trophy to match their school colors.This tradition began following the 2003 affair when North Carolina football players immediately spray painted the base of the bell Carolina blue. Whenever the Tar Heels are in possession of the Victory Bell, cheerleaders wheel it out while ringing the bell at the same time they run out their live ram mascot, Ramses.North Carolina owns a 57-37-4 lead over Duke in the series and most neutral record keepers agree. However, Duke has always claimed that North Carolina leads 56-38-4 Both longtime rivals agree that North Carolina had a pair of wins vacated in 2008 and 2009, but Duke officials maintain that their 1889 matchup was won when both teams stayed home, believing they were both the home team that week. 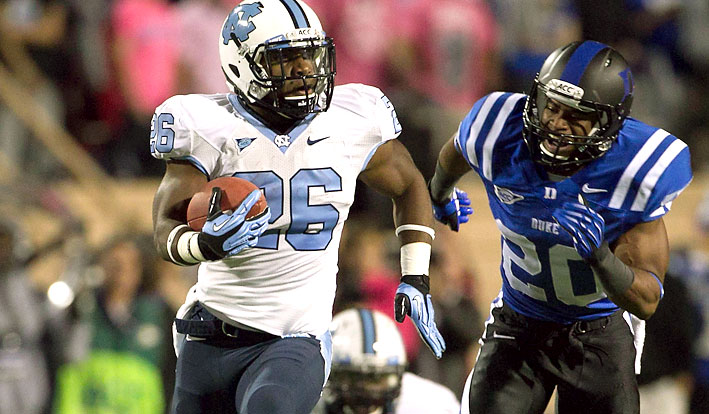 North Carolina leads the series since the introduction of the Victory Bell with a convincing 41-22-1 record.

By The Betting Numbers

The Tar Heels have also gone 17-3 SU and 11-9 ATS over the last 20 meetings but Duke had won two straight prior to last season while covering the spread in both victories. North Carolina man-handled their ACC counterparts last season, winning 45-20 to easily cash in as a 5-point road underdog.The Tar Heels went 6-7 overall and 4-4 in the ACC Coastal Division last season and will host the Blue Devils on Sat, Nov 7. Duke went 9-4 overall and 5-3 in the same Coastal Division. North Carolina (5-8 ATS) and will look to make it two straight against a Duke (8-4-1 ATS) team they upset this past season. SourcesWikipedia.org (http://en.wikipedia.org/wiki/Victory_Bell_%28North_Carolina–Duke%29)GoDuke.com (http://www.goduke.com/SportSelect.dbml?DB_LANG=C&DB_OEM_ID=4200&KEY=&SPID=1843&SPSID=22672)
Older post
Newer post