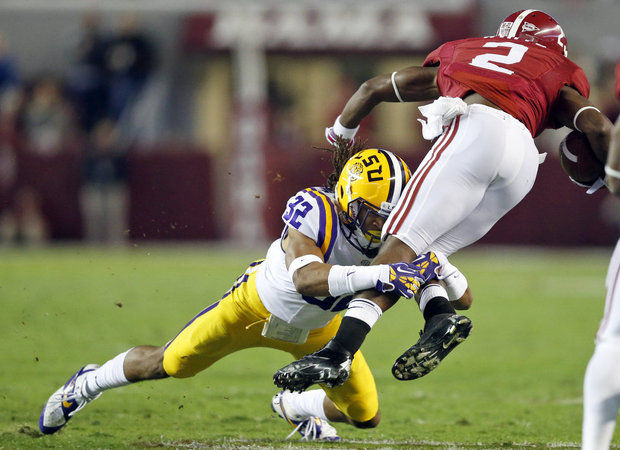 Written by Jordan Walters on November 6, 2014

NCAA Football Betting News
You are not going to have very many people disagree with you if you loudly exclaim the SEC West to be the best division in college football. The fact is that is these teams didn’t have to play one another, you might very well have all 4 playoff teams coming from there. It’s great news for us all that they do have to meet up, and there is another great one lined up this weekend, with #5 Alabama heading into Louisiana to take on #16 LSU. Football lines are pretty much set for the Alabama Crimson Tide and LSU encounter, putting Alabama Crimson Tide as favorite.One of the biggest mistakes made this season was writing off Nick Saban and his Alabama team after a loss to Ole Miss and a lackluster win against Arkansas. They have been pretty much lights out since Saban had a bit of a meltdown at his weekly press conference, and are once again among the favorites to be in the picture when the playoffs roll around. In order to get there, though, they are going to have to get some joy in a stadium that is incredibly difficult for road teams to play in.Both of the defeats that LSU has suffered this season has come at the hands of very good teams in the shape of Mississippi State and Auburn. That is not to say that they can’t hang with the big boys though, as it was they who drove the first nail into the coffin of Ole Miss’ season. This is a team that seems to build off the energy of their fans when playing at home, as they are essentially shutting opposing offenses down, which is exactly what they did to Ole Miss in a 10-7 win. They are going to need more of the same if they are to pull the upset this weekend.

GAME ODDS:ALABAMA: -6½-110LSU:+6½-110It seems that everyone is back on board the Crimson Tide bandwagon, as they have been installed as 6.5-point road favorites. They are currently a rather unimpressive 2-5 ATS this season, which includes being 0-3 ATS as a road favorite.Alternatively, LSU are a very healthy 7-2 ATS this season, and they have really made hay at home, where they are 5-1 ATS. Alabama is 2-0 SU over the past three seasons against LSU, with one of those victories coming on the road. That said, LSU did manage to cover in that home loss. The way this match-up has gone over the past three seasons is pretty much how I think it will play out this weekend. I like Alabama to win, but by a field goal at best. That means I will be taking LSU +6.5.
Older post
Newer post