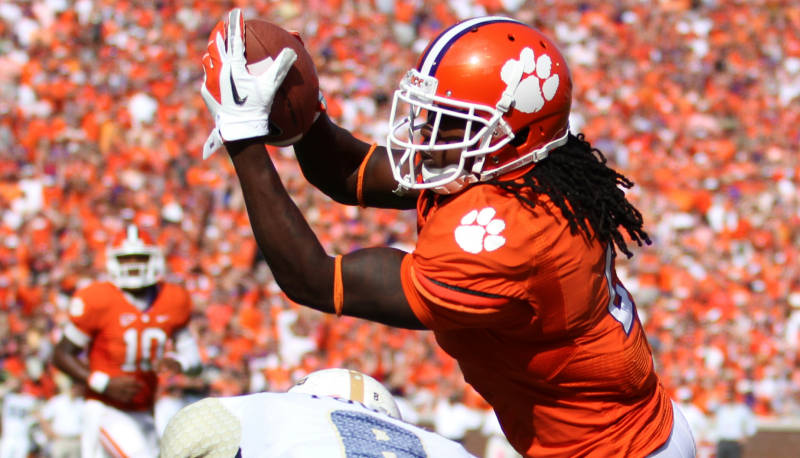 NCAA Football Betting News
In recent years, the ACC has become a conference that has started to gain some real credibility. That was certainly helped by Florida State winning it all last year, but you look at the performances of Duke, Georgia Tech, and Clemson, and you see a conference that is very much on the rise. This week sees two of those teams go head to head, as Clemson go on the road to take on Georgia Tech, and we have the college football odds right here.
Date/Time: Saturday, November 15, 12:00 PM
Location: Bobby Dodd Stadium, Atlanta, Georgia Broadcast on ESPN
Clemson will not have good memories of their last trip into Georgia, as they were spanked 45-21 in Week 1 by the Bulldogs. Clemson took another hit against Florida State, in a game that they were unlucky not to win. Since then, they have reeled off 6 straight, but have had to scratch and claw their way through many of those games, which can be seen by their inability to cover the spread during that period. As much as they are putting wins on the board, there are still many in football who are looking at this Clemson team as underperformers.

The #Clemson vs. Georgia Tech game in Atlanta on Saturday, November 15 is scheduled to start at noon. It will be televised by @espn. — Clemson Football (@ClemsonFB) November 9, 2014

The same cannot be said for Georgia Tech, as few saw them putting together the 8-2 season that they have to this point. They are in for a tough road is they want to hit double digit wins this season, though, as their next game after Clemson is against state rivals, the Georgia Bulldogs. As we have come to expect from a Paul Johnson coached team, the option play is what has delivered success for the Ramblin Wreck, with most of their offense coming on the ground. Clemson has a pretty stifling run defense, so something is going to have to give here. BETTING ODDS Clemson may be on the road here, but most sports betting sites still favor them by 3-points. This is definitely a case of bettor beware, as Clemson are 0-2 this season when starting as a road favorite. They are also on an 0-4 ATS streak that simply cannot be ignored. Tech are 6-4 ATS on the season, but are a very favorable 5-2 ATS when playing a conference opponent. They are 0-2 SU and ATS against Clemson over the past 3 seasons, but both of those games were away from the cozy confines of Bobby Dodd Stadium. Game Odds CLEMSON: -3-110    OV 60 ½ -110, ML -150 GEORGIA TECH: +3-110, UN 60 ½ -110, ML +130 This has all the makings of a coin flip game, and may very well come down to who has the ball last. It looks like a match-up designed to be a field goal game, and any of the two teams can take the win.
Older post
Newer post