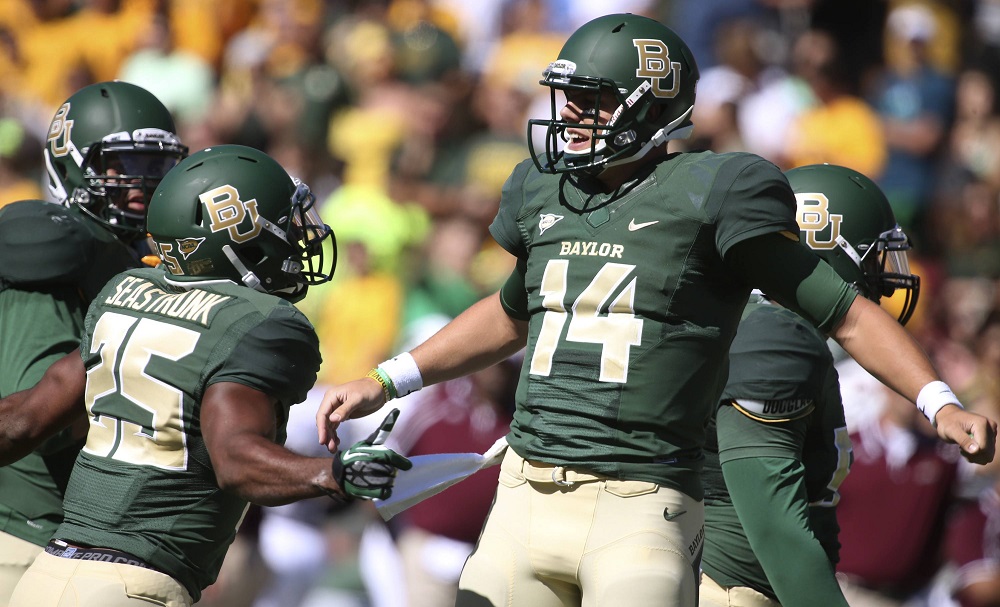 NCAA Football Betting News
With just a few games to go before we know who’ll be in and who’ll be out of the first college football playoff, the time left to impress the committee is quickly running out. A loss in those final weeks will see teams fall out of contention, while a couple of big wins can vault those on the outside looking in right back into the playoff picture. One team with a chance to really impress is Baylor, which is set to play the Oklahoma State Cowboys in Big 12’s biggest football betting matchup.
Date/Time: Saturday, November 22, 7:30 PM
Location: McLane Stadium, Waco, Texas
The Baylor Bears have had a great season, and they actually improved their chances of getting into the top 4 without even having to play a game last weekend. Results definitely went their way, but they still have 3 games to go, each of which will need to be near perfect if they are to make it in to the big dance. The first of those games comes this weekend against a 5-5 Oklahoma State. This is one that the Bears should be able easily navigate, but they cannot get into the mindset of looking ahead until this one is over. They are likely going to have to continue piling up the points as they have been all year if they want to get the attention of the playoff committee.

It has been a disappointing season for the Oklahoma State Cowboys, and this week they have the added distraction of Coach Mike Gundy being mentioned in regards the some to be available Florida Gators job. He may be a longshot for that position in the eyes of many, but it is still sure to serve as a distraction, nonetheless. Oklahoma State is going to have to be laser focused if they are to have any shot of breaking out of their current 4-game losing skid. BETTING ODDS Baylor have been lighting it up offensively all year, so it’s not really a major surprise to see them installed as a hefty 28.5-point home favorite. They are 6-2 ATS this season, although they have not had to overcome a line quite as large as this one. This is a team that tends to finish the season strong, and they are 8-2 ATS in November going back the last three seasons. Oklahoma State have not been very competitive this season, and are just 3-7 ATS this season, which includes going 0-5 ATS in their last 5 games. These two have met twice in the past three seasons and have split SU and ATS. Game Odds: OKLAHOMA STATE: +28½-110 BAYLOR: -28½-110 As much as I think Baylor will win this one quite handily, I am a little concerned about the line. That said, Oklahoma State has only score 40 points in their last 4 games, so they are not likely to put up too much of a fight. It’s going to be close, but I think Baylor will just manage to cover the double digit spread.
Older post
Newer post