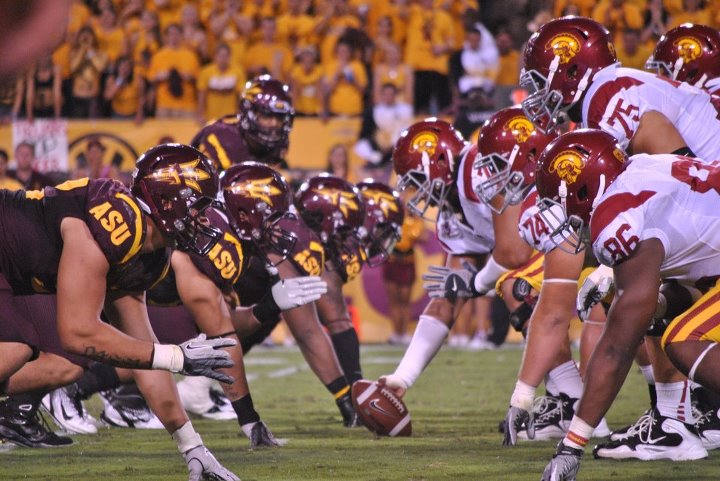 NCAA Football Betting News
Saturday’s college football calendar brings a PAC-12 game pitting two teams with equal records and similar qualities on the field. Both the USC Trojans and the Arizona State Sun Devils have started the season with a 3-1 record; however, whereas the Trojans will be seeking a 3-0 start to the Pac-12 play after a 35-10 win over Oregon State last week, the Sun Devils will want to avoid a 0-2 start in the Pac-12 play having lost their conference opener against the Bruins. An embarrassing 62-27 beating in the hands of UCLA last week means that another loss for Arizona State would put the team in an almost impossible position to qualify to the first ever college football playoffs. Below is a preview and betting analysis on the football betting lines for this match, so let’s start. Game Details at a Glance! Game:  Arizona State Sun Devils vs. USC Trojans Venue: Los Angeles Memorial Coliseum Date: Saturday, Oct. 4, 2014 Time: 7:30 PM ET TV: Fox

Betting Odds and Lines for the Game

A record 62 points scored by Arizona State in last year’s meeting with the Trojans will be fresh in the minds of all USC players—something that they will definitely try to avenge in this game. The good news for USC fans is that former Arizona player Justin Davis is slowly getting back to good speed after his 10-month injury. Davis’ ability to multitask as a receiver and ball carrier, as was witnessed in last week’s win, rushing for 82 yards and a touchdown in 15 carries against Oregon State.  This offense will be further boosted by the in-form tight end Bryce Dixon who made an amazing catch to set up the first offensive score against the Beavers. Defensively, the Trojans have a solid defensive unit in Su’a Cravens (USC’s player of the game against Oregon) and lineman Leonard Williams. If these pair is able to keep up with their catalytic defensive plays, USC will have no problem stopping Arizona’s offense, thus steering the Trojans to victory and a 4-0 conference record that would likely improve their ranking in the AP poll. Conversely, in his first college career start last week as a replacement for the starter QB Taylor Kelly, Sun Devils’ Mike Bercovici impressed with 488 yards of completed passes and three touchdowns. The bad news as that his effort wasn’t . With Kelly’s availability for Saturday’s game still “pretty questionable” because of his foot injury, coach Todd Graham announced that Bercovici will get another team start against USC. We are sure that some bettors think the Trojans will need to struggle to cover the double digit spread, but USC will have their hands full and won’t have problems handling its rival. Defensively, there is need for Arizona State to improve their collective ability to break tackles, intercept passes and avoid self-inflicted blunders. If that doesn’t happen, the Trojans will shamelessly expose them and dismantle their defense just as it happened last week against the Bruins. Game Odds: ARIZONA STATE: +12-110 USC: -12-110

Arizona State still has fresh memories from last year’s win over the Trojans, but the two squads are facing opposite situations, which makes USC look as a much stronger contender and a great college football pick for Week 6. They are set to get their sweet revenge when they duel this Saturday. A convincing win looks highly probable for the Trojans, so expected a bloated score for this one.
Older post
Newer post