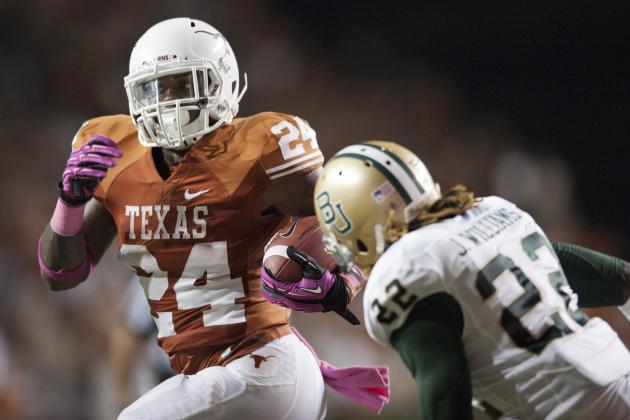 NCAA Football Betting News
The pecking order in the Big 12 has changed over the last few years. The Baylor Bears were the conference doormats but now have become a  surprise after going 4-0 this season and enter the national rankings. Only a few years ago they were an easy win for the top teams in their division, but now they are the class of the Big 12, and the odds for college football are on their favor entering Week 6. Baylor’s rival for their Saturday match is the Texas Longhorns, a team that used to be one of the best in the country but that is now unranked and sitting at 2-2.

The Bears haven’t played any top competition in their first four week of play. They have steamrolled their first four opponents, and lead the country in scoring, averaging 56.8 points per game. This doesn’t bode well for the Longhorns, who average 21.3 points per game, because they will have trouble keeping up with the Bears.The Bears have won three of the last four meetings, after losing 12 straight against the Longhorns, but they were defeated the last time they played in Austin, and might suffer the same fate this year, because the Longhorns have a very good defense this year, and they also played a very close game against the 12th ranked UCLA Bruins, which they eventually lost 20-17.

At 2-2, the Longhorns can’t afford to overlook Baylor ahead of their annual showdown with Oklahoma, and they also need to get as many wins as they can, if they want to make it to a bowl game for a second consecutive year. Their offense has improved in recent weeks, and they will be able to stay close with the Bears if their defense can give the type of performance they have given the past few weeks.Baylor entered the season with playoff aspirations, so they know they can’t afford to slip up against the Longhorns, especially with a game against the 25th ranked TCU Horned Frogs coming up next. They will have some trouble throwing the ball against the Longhorns defense, which allows opponents to throw for less than 200 yards a game, and will need to rely on their running attack more to win the game.

The Texas Longhorns lost against two ranked teams before beating Kansas 23-0. They have struggled a lot this season, and have lost a lot of players due to head coach Charlie strong cleaning house. The talent they have left on the team can help them win games against middle of the pack teams, but they don’t stand a chance against a squad like Baylor, and will be routed in this game. So expect the Bears to win and cover the 16-point betting spread.
Older post
Newer post