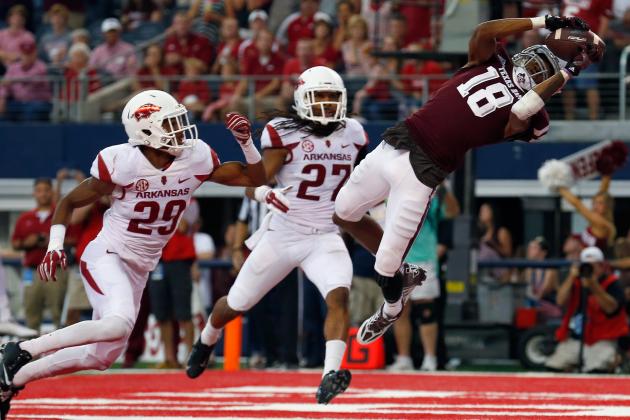 Written by Jordan Walters on October 5, 2014

NCAA Football Betting News
Week 6 of the college football season is now officially in the books, which means it’s time to take a look at the big winners and losers of the week, review the college football betting action and pick some of the biggest upsets of the week.Without a question, the week was one of the most exciting and unpredictable we’ve seen in many years, and I think it’s pretty fair to say that football fans were the biggest winners, as there were a number major upsets and exciting games going on all through the day on Thursday, Friday and Saturday. So let’s begin…The trend for the week was actually set on Thursday night, when the Arizona Wildcats marched into Oregon and knocked off the No.2 ranked Ducks 31-24.  BYU’s perfect record was also gone by Friday night thanks to a 35-20 home loss to Utah State. Amazingly enough, the No.1 Florida State Seminoles was the only one of the top 4 teams to get out of the weekend unscathed. No.2 Alabama suffered a last minute loss to No.11 Ole Miss Rebels in a game that had an unbelievable ending. Down by 7 points, the Rebels put a rally in the 4th quarter that gave them the lead, however, Ole Miss somehow managed to miss a PAT attempt TWICE, leaving time on the clock for Bama to go down field and steal the win. It looked set to happen, the Crimson Tide completed a series of first downs and seemed ready to win the game and knockoff the Rebels, but that impression vanished in a blink of an eye when Alabama’s QB Blake Sims was picked off in the end zone to finish the game.It was another great game as No.25 TCU Horned Frogs outlasted the No.4 Oklahoma Sooners for a 37-33 win. All of this means that the top 4 is going to look very different this week. The team likely to land in second spot will be the No.5 Auburn Tigers, who laid an absolute beating on no.15 LSU Tigers. The SEC West continued to eat itself as No.14 Mississippi State hammered the No.6 Texas A&M Aggies by a score of 48-31.No. 7 Baylor is another team that should benefit from the upsets, as they knocked off Texas without really breaking a sweat. The chain of upsets continued with UCLA’s (No.8) 30-28 loss against unranked Utah, which is sure to hurt their playoff bid. Meanwhile No.9 Notre Dame won a tight one against No.14 Stanford. No. 10 Michigan State picked up a nice 27-22 win against Nebraska, while the No.13 Georgia Bulldogs put themselves back in the title contention with a 44-17 trouncing of Vanderbilt.The big winner of the week in terms of individual stats was undoubtedly Washington State QB Connor Halliday who threw for an astounding 734 yards and 6 TD’s. An honorable mention goes to Texas State RB Terrence Franks who carried the rock 15 times for a total of 284 yards and 3 TD’s.On the Heisman front, a pair of QB’s took a hit this week with their teams losing. Oregon QB Marcus Mariota cannot really shoulder the blame for the loss, but Texas A&M QB Kenny Hill has to be held somewhat accountable, as he looked very much like a freshman on a number of occasions.Mississippi State QB Dak Prescott is now the favorite for many after week 6, as he was efficient in the win over Texas A&M. Others will claim that Georgia RB Todd Gurley should now be the front runner, as he once again posted video games stats, racking up 163 yards and 2 TD’s on 25 carries. He also, unbelievably, complete a 50 yard pass.Those were some of the highlights from week 6. Judging by the action and the many upsets we’ve seen this week, it is natural to expect some intense action for week 7, so keep an eye on the early college football odds, I’m sure there will be a plenty of good betting opportunities and great picks for this coming week.
Older post
Newer post