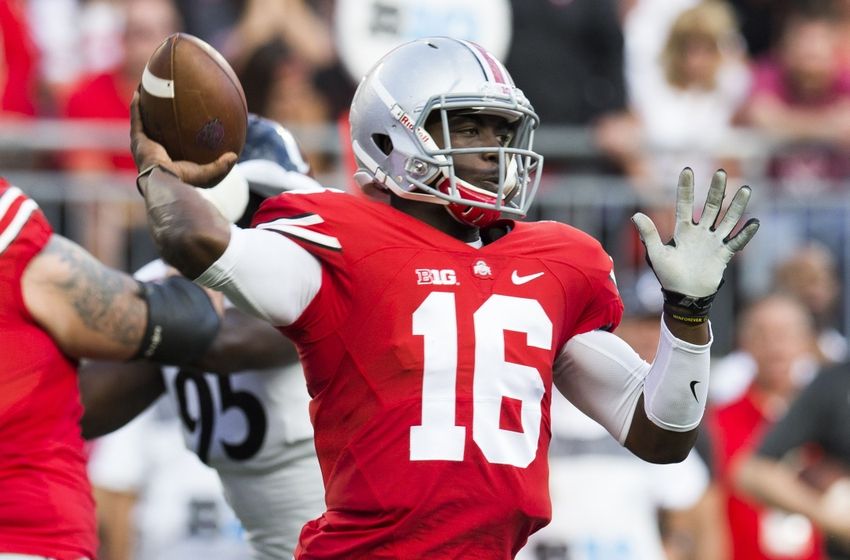 NCAA Football Betting News
If you are one of those Buckeyes supporters who had their doubts about Ohio State’s contention in this year’s college football championship, then you are probably having some thoughts regarding what the team is going to do this weekend. the college football predictions entering their game vs. the Maryland Terrapines put them as favorites, but they still have a lot to prove to fans and bettors.  They have the After the loss to Virginia Tech on Week 2, the team bounced with back-to-back wins of 50-28 against the Bearcats and a 66-0 blowout of Kent State to move to 3-1, but so fat that doesn’t seem to be enough to get fans to believe in them again.

As for the Maryland Terrapins’ fans, let’s just say there is a lot to talk and smile about this season. From a potent offensive team style to a 4-1 start to the season or even the convincing 37-15 beat down of the highly-rated Indiana, one is almost lost for choice of what to brag about. Simply put, on Saturday, Oct. 4 at 12 PM ET, there will be an amazing clash between the in-form Buckeyes and the underrated-but-lethal Terrapins—a match which bettors can’t afford not to watch or even bet on. Check out the section below for a concise analysis that can help you place your savvy bets in a well-informed way. Betting Preview and Analysis Following Buckeyes’ Braxton Miller’s season-long injury he sustained in August, J.T Barrett has gracefully and competently stepped in to fill the two-time reigning conference MVP’s shoes. Though Barrett started his role somewhat boyishly, the red shirt freshman has quickly grown up to become a father-figure of sorts in commanding Ohio State’s stellar passing and offensive play. After hitting only 21 of 44 attempts for 445 yards, four INTs and three scores in the first two games, Barrett recorded an auspicious 49 of 66 completed passes for 642 yards, 10 touchdowns and one pick in his last two games. It is no wonder coach Urban Meyer expects him to continue with the same good form that has seen the Buckeyes put in effective throws and runs. Game Odds: OHIO STATE: -8½-110, ML -340 MARYLAND: +8½-110, ML +290 Unfortunately, Ohio State’s defense has been far from solid. Having surrendered 422 yards to the Bearcats, plus a host of other sloppy defensive plays, there will be need for a quick change in tactics for the team’s back four. This, however, will be a tall order for the Buckeyes considering the Terrapins are averaging 308.3 passing yards with seven TDs in three games—two of which were victories. Additionally, the well-statured Stefon Diggs has bounced back from his sophomore season injuries with decent performances for Maryland. This season, he has recorded 29 receptions 398 yards and two TDs. Using Diggs as a point-man for aerial balls should give the Terrapins a strong offensive presence because Ohio is usually very strong, almost unbeatable, on the ground. In their defense, the Terrapins boast of the resourcefulness of reigning Big Ten Defensive Player of the Week Cole Farrand. Although playing against the experienced Ohio State will definitely be a new challenge for Farrand and his fellow players, it will be an amazing opportunity for them to entertain their home fans and even snatch a surprise victory. Betting Prediction Diggs will continue his splendid performance and put in some decent numbers, but Barrett and his teammates will prove to too hot to handle for Maryland. A Buckeyes win looks certain here, and they are also likely to cover the college football spread on this one.
Older post
Newer post