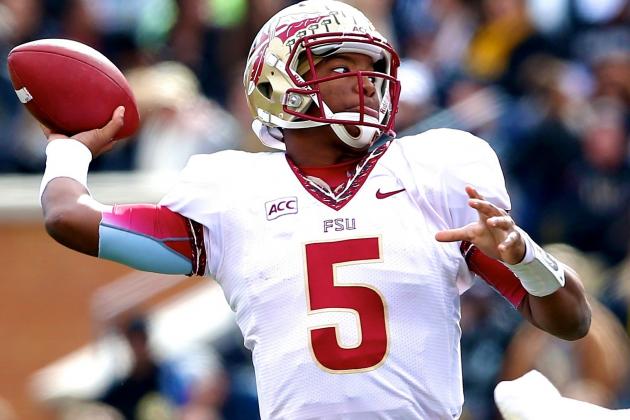 Written by Jordan Walters on October 3, 2014

NCAA Football Betting News
The No.1 ranked Florida State Seminoles resume their title defense on Saturday, Oct. 4th when they welcome the Wake Forest Demon Deacons in Tallahassee. Despite their remarkable 20-game winning streak, the Florida State Seminoles have disappointed bettors after five weeks of action. The team has been listed as big favorite to win its games week after week, but has failed to cover the college football spread in all its games. Florida State opened the season with a 37-31 win over Oklahoma State. A week later the Seminoles extended their winning record with a 12-37 victory over Citadel before beating Clemson by a slight margin (17-23) on Week 4.

Only a week ago Florida State scrapped through a hard-fought 56-41 victory against the North Carolina State Wolfpack after initially trailing them 38-28. As the Seminoles prepare to meet the Demon Deacons, there will be an urgent need for FSU to get a convincing victory that justifies their dominant first-place votes and breaks the 0-5 ATS record they carry so far this season.On the other hand, Wake Forest really needs to put some decent points on the board. Failing to score more than 24 points in any of their games this season underlines their weak offensive play. If they are to match the Seminoles who have scored more than 30 points in all but two games of their 20-game win record, the Demon Deacons will certainly have to up their game.Although 70 percent of Wake Forest’s roster is composed of sophomores and freshmen, some of the players have shown good talent. For example, Junior LB Brandon Chubb leads his team with 52 tackles, three quarterback hurries, two tackles for loss, two pass break-ups, a forced fumble and a sack. Additionally, freshman QB John Wolford has six TDs and 10 interceptions in five games. With such players, some modicum sparks of brilliance can be expected from the team.Game Odds:WAKE FOREST: +38-110, OV 55 ½ -110FLORIDA STATE: -38-110, UN 55 ½ -110Unfortunately for the Demon Deacons, Heisman winner QB Jameis Winston is back for the Seminoles. An inspired performance by Winston was, in large part, responsible for the comeback against the N.C. State Wolfpack. Even on a bad day, Winston’s impact on a game is as good as the best performance of most talented QBs. So, in short, Wake Forest should be prepared for a long afternoon from this QB and his attack-minded teammates.Key Facts at a Glimpse!Betting PredictionBased on the football odds for this game one would expect a dominant play and win by the Seminoles with a blowout scoreline at the end of the game, but judging the way they’ve played so far this season, I think the Seminoles will get an easy victory, but will struggle to cover the spread. In addition, apart from Winston’s influence, anticipate a solid performance by Florida State’s WR Rashad Greene who already has 35 receptions and 543 receiving yards this season.
Older post
Newer post