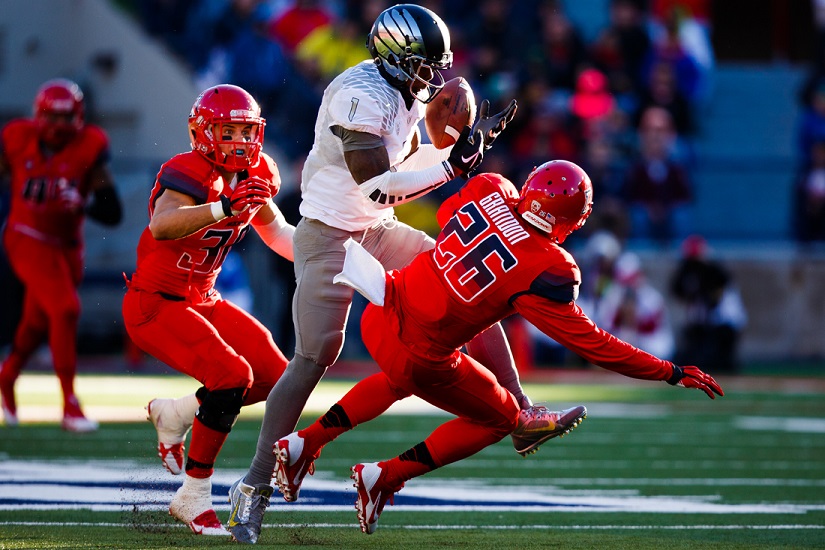 NCAA Football Betting News
The opening day of Week 6 features a huge chance for those looking for valuable college football betting opportunities. A pair of unbeaten teams go head to head tonight, as the Arizona Wildcats takes their 4-0 record into Eugene to face the #2 ranked Oregon Ducks (10.30 PM EST on ESPN).Oregon have started the season as expected, which means a high-powered, fast-moving offense that piles up video game type numbers. They have put 194 points on the board in their first 4 games, and have only turned the ball over a single time. That is enough to strike fear into any defense, especially one that has given up a lot of points in the past couple of weeks, which is exactly what Arizona has done.The Wildcats entered each of their 4 games as favorites this season, but have only been able to over the spread once despite winning all 4. Other than their destruction of UNLV in the opening week, Arizona has been made to fight tooth and nail for all of their wins, the most recent of which was a 49-45 thriller on the road against California. They have a 2-2 OVER/UNDER record to go with their 1-3 ATS this season, which is exactly the same as what the Ducks have compiled.While the 1-3 ATS record that Oregon has posted this season may not seem that impressive, it’s worth noting that their style of offense often sees the spread set at ridiculously high numbers. They were installed as 53- and 42-point favorites against S. Dakota and Wyoming, respectively, neither of which they were able to cover. The 23.5-points they have been favored to win my tonight seems a little more manageable, especially since they are at home in front of an always boisterous crowd.

Does Oregon worth betting on the 23-point spread?

Game Odds:ARIZONA    +23½-110, OV 83 -110OREGON    -23½-110, UN 83 -110Oregon holds a definite advantage over Arizona SU over the past few years, but things are a little less clear when looking at the spread and the points total when these two meet. They are 1-1 SU and ATS in the past three seasons, with both of those games going UNDER the total.Going back to 1992, Oregon has amassed the vast majority of their wins against the Wildcats at home, going 8-1 SU in that time period. It is again the UNDER that is the most common outcome when it comes to point total, which is set at 83.5 for this one.

There really isn’t any value to be found in a straight up bet on the Ducks, which means that the total score for this game might be the way to go on this one. The trend shows that the UNDER might be the best pay here, but if you are looking to bet on the college football spread, then you might also consider taking the Arizona Wildcats at +23.5
Older post
Newer post