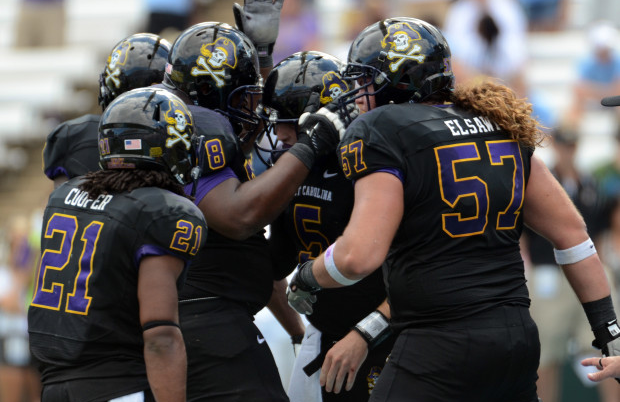 NCAA Football Betting News
It looks to be a tale of two offenses when the No. 19 East Carolina Pirates (4-1) head to South Florida to take on the Bulls in an AAC matchup. Sit atop of the American Athletic Conference, East Carolina has been lighting up the scoreboard all year. The four wins, including victories over Virginia Tech and North Carolina, place them as heavy favorites in the college football game lines. Meanwhile the Bulls (2-3) are seemingly trying to find some offensive inspiration as they look to avoid another back-to-back loss.

The Pirates have put up an impressive 218 points in their 5 games. Their lowest haul (23 points) came in their only loss of the season against the South Carolina Gamecocks in a game that they were expected to lose. Not only have they been offensively dominant, they have been great against the spread, compiling a 4-1 record so far this season. The Pirates had no problems handling the Southern Methodist Mustangs 45-24 in the AAC debut, although the team looked much superior than its rival, the result marked the first time this season that they didn’t cover the spread. But in fairness, it was a -38 point spread they were asked to overcome. With the win, ECU improved to 4-1 and broke in to the top 25 teams in the nation.On the other side of the ball, the South Florida Bulls have an offense that can best be described as anemic. They started out well enough, taking out West Carolina 36-31, but things have gone downhill ever since. The four games that followed have seen them score a meager 61 points combined, with only one win, a 17-14 victory over Connecticut, coming during that time. It’s certainly tough to ask the defense to hold up under that type of pressure.The Bulls enter the game coming in off a bye week and now they will try to rebound from a 27-10 loss at Wisconsin.  This game looks to have all the makings of a mismatch, but strange things regularly happen in college football. You only have to look at the events of last weekend for proof of how crazy things can get. Perhaps a quick look at the numbers will help clear things up a little.

It’s not really that surprising that East Carolina have been installed as 15-point favorites for this one, with many feeling that the spread is actually a little on the low side. Yes, some will look at their inability to cover last week as a sign, but you also need to look at what they accomplished in the weeks prior.Game Odds:EAST CAROLINA: -15-110SOUTH FLORIDA: +15-110These two teams have not really played very often down through the years, but when they have, it is South Florida who has been dominant. The Bulls are 4-0 SU and 3-1 ATS going back to 1992, which includes a perfect home record. There have been no meetings in the past 3 years, but this may serve as an indication of what may happen next Saturday.

As decisive as the historic record looks for the Bulls, but the fact of the matter is that it does not speak to the current state of both teams. The Pirates look much better in almost any aspect,  reason why they have the football betting odds on their favor. Expect ECU to cover, and see them wining by about 18-20 points.
Older post
Newer post