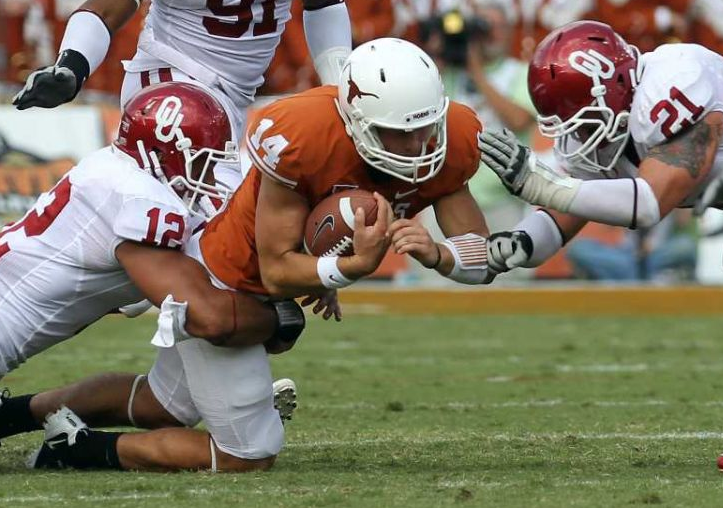 NCAA Football Betting News
As far as sports rivalries go, very few have a long competitive history fiercer than the Texas Longhorns and Oklahoma Sooners, commonly known as the Red River Rivalry. With over a hundred years since their first match in 1900, many coaches, fans and players have come and gone, but the rivalry seemingly gets more ferocious with every passing decade. This coming weekend, fans from both teams have an opportunity to rekindle their emotional affair when they meet in their usual neutral site—the Cotton Bowl Stadium located in Dallas.  But who has the best football odds to win this game?
Saturday, October 11, 12:00 PM, Cotton Bowl, Dallas, Texas
The Red River Rivalry in Numbers!Betting on the LonghornsFor the third time in four games, the Longhorns suffered a defeat when they lost 28-7 to Baylor last Saturday. More worryingly, the 2-3 Longhorns have a blunt offense that has scored less than 17 points in three of the five games they’ve played this season. Tyrone Swoopes, who much is expected of, has been disappointing with a pass completion rate of 59.4 percent for five TDs with three interceptions. In Texas’ last game, Swoopes didn’t even record a Touchdown.But in spite of these woes, a few players have shown great potential. Their best offensive playmaker, John Harris, has caught a TD pass in 4-of-5 games. Malcolm Brown and Johnathan Gray have also combined for more than 500 rush yards and three scores. Against the Sooners, such players will need to go all-guns-out for their team.Defensively, tight end M.J. McFarland and Jordan Hicks need to inspire their defensive counterparts to increase their exploits in forcing turnovers, interceptions and tackling the Sooners with more accuracy.With an inspired defense and offense, the Longhorns have a calculative coach and great players who can uplift them to a crucial victory against their fiercest of rivals.Betting on the SoonersFollowing their first loss of the season in the narrow 37-33 loss to TCU, the Oklahoma will be seeking to better their 4-1 start to the season. In four of their first five games, QB Trevor Knight has completed only 54.5 percent of his passes while throwing at least one interception. For a player of his magnitude, there is dire need for him to find the accuracy and good form that saw him become one of the most promising QBs in college football over the past couple of years.Meanwhile, Freshman Samaje Perine is red-hot offensive form, scoring seven TDs in the last two games. His industrious efforts have been complemented by Sterling Shepard who has also chipped in with some decent receiving yardage numbers over the past games.At the defense, there is of course Dominique Alexander and Zack Sanchez whose tackles and interceptions are hugely responsible for the four back-to-back victories in their first four games. Going by the vast offensive and defensive talent of the Sooners’ team, it comes as no surprise that many bookies consider them favorites to win the game.PredictionFootball Game Odds:TEXAS: +14½-110OKLAHOMA: -14½-110Backing the Longhorns for a victory when they’ve had a rather shaky start to the season is tough, especially with the Sooners starting impressively. But like most rivalry derbies, inspiration comes even to the weakest of teams. For this reason, my take is that the Longhorns will have one of their strongest performances this season, but the Sooners will eventually defeat them in a tightly contested thrilling game of football. Which team do you support and what is your prediction?
Older post
Newer post