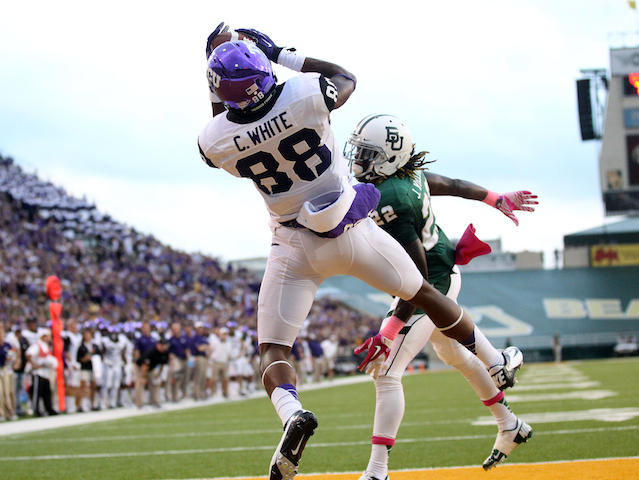 NCAA Football Betting News
Here’s a great game for bettors looking for college football betting picks for week 7. Two of the best in the Big-12 Conference will lock horns this weekend, as the #9 TCU Horned Frogs hit the road to take on the #5 Baylor Bears. The game is must win for both programs as they come into this with a perfect record and the opportunity to land a spot in that coveted Top 4 with a victory in this one.

The Horned Frogs come into this game fresh off a huge win last week against a ranked Oklahoma team. Last weekend’s games provided some truly memorable match-up’s, with the TCU game very high on the list. It was a back and forth game that saw the lead change hands several times. It was the Horned Frogs who prevailed though, outlasting the Sooners for a 37-33 win and a perfect 4-0 record. Prior to that game, they hadn’t seriously been tested, running up big double digit wins over Samford, Minnesota, and SMU, going 4-0 ATS in the process.Baylor has yet to be seriously tested this year, and have in fact made a habit of routinely blowing teams out. They started out with a pair of home games where their offense exploded for a combined 115 points. Their next three games in the calendar came on the road, where they racked up a further 140 points. They have been something of an offensive juggernaut, with a good deal of the damage they have inflicted coming by pounding out the run game. If TCU are to have a chance here, they need to stuff the run and win the turnover battle, which is something they have done well this season.

Baylor comes into this one as an 8-point home favorite, which isn’t really a major surprise considering the way they’ve played on recent weeks. The number to pay close attention to here, though, may well be that 66.6 point total. Historically, TCU had been dominant when it comes to covering the spread when these two meet, with the straight up records a whole lot tighter. It is the OVER that has been the truly dominant trend when these two lock horns, though, with many feeling that is where the best chance of making money lies.Game Odds:TCU: +8-110, ML +260BAYLOR: -8-110, ML -310

Personally I think there is a lot of value to be found in this match, with the OVER being my choice for the top play here. That said, I also like Baylor to win straight up, and to cover the 8-point spread. I see them as being a pretty easy 2 TD winner in this one, which places the Bears as one of the hottest college football picks of the week.
Older post
Newer post