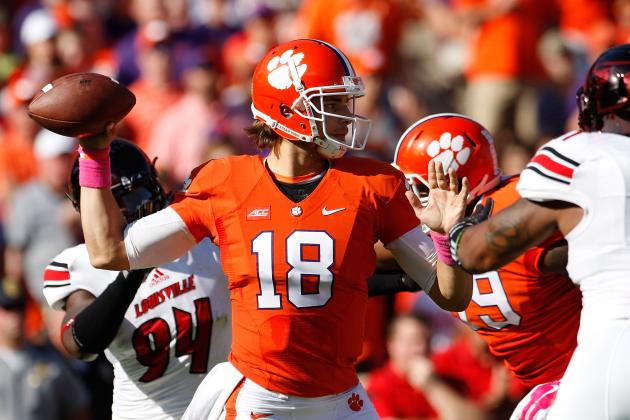 NCAA Football Betting News
The ACC has not really been viewed as one of the stronger college football conferences in recent years, but the rise to prominence of Florida State and the exciting offense provided by Clemson has gone a ways towards changing that perception. The Tigers are  the only team in the ACC other than the Seminoles currently ranked in The Associated Press Top 25. A loss to the Boston College eagles could be a lethal blow to their playoff hopes, so victory is a must for the Tigers, who enter Saturday’s match as 5-point favorite on the college football lines. Boston College has claimed victories over USC, which was ranked 9th at the time, and another win over a ranked team could help the team to put aside losses against Colorado State and Pittsburgh.
Saturday, October 18, 3:30 PM, Alumni Stadium, Chestnut Hill, Massachusetts
One of the bigger Atlantic Conference match-ups this week sees #24 Clemson head into Boston College to play a team with the same 4-2 record. Don’t let those numbers fool you, though, as this looks like being something of a mismatch, although you never can tell, especially in light of all the upsets that have been thrown our way at the halfway point of the college season.A lot of people looked at Clemson as being a potential playoff candidate this year, but they were completely dominated between the hedges by Georgia in Week 1. They won their next game as expected, but then lost a close one to Florida State in Week 3. The Tigers have been rolling ever since, taking out North Carolina, NC State, and Louisville in the process.Boston College saw their biggest win of the season come in a home game against USC, where they outlasted the Trojans to take a 37-31 win in a game that they came into as 17-point dogs. It’s been a bit of a Jekyll & Hyde show for Boston College, though, as their two losses have come against Pittsburgh and Colorado State, neither of whom would be described as college football powerhouses.

Game OddsCLEMSON: -5-110BOSTON COLLEGE: +5-110Clemson is 3-1 in conference play this season, with their only loss coming against the Seminoles. They are deservedly in this one as 5-point favorites, which may rank as a spread that is a must bet. Clemson are a pretty healthy 4-2 ATS this season, with Boston College boasting the same record. That said, it’s worth noting that the two occasions where BC failed to cover this season came in the games that they lost.The stat about Boston College failing to cover in the games they lost this season is significant in that I believe that they are about to be on the end of a pretty hefty beating against the Clemson Tigers. So the final football betting advise is this: The five point spread means little, the Tigers will go for a win and are likely to put a solid beating over the Eagles. This has a double digit win written all over it, which is why my money will be on Clemson to cover.
Older post
Newer post