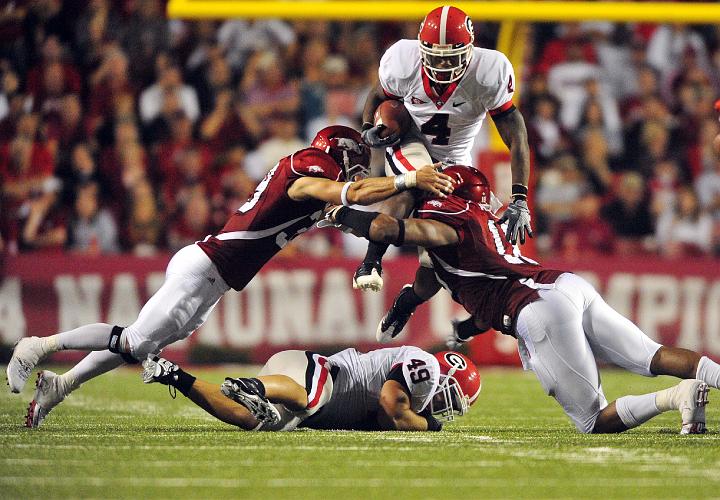 NCAA Football Betting News
As the weekend approaches Saturday’s matchup between the 5-1 Georgia Bulldogs and the 3-3 Arkansas Razorbacks, football fans from both teams will be anticipating positive results from the match.Both teams have a shot of taking the win; for the Bulldogs, winning the game will increase their chances of getting to the postseason and improve their football betting odds to lock the SEC title, but for the Razorbacks, who will look to win their first SEC game since their victory over the Kentucky Wildcats in October, 2012, there’s something more on the line than a victory over a conference rival. For them, the name of the game is vindication.

Georgia faces Arkansas with a lot of confidence after thrashing Missouri 34-0 in their previous game. In this contest, the Bulldogs’ RB star Todd Gurley will be out on a suspension amidst NCAA investigations. Meanwhile, the Razorbacks suffered a narrow defeat of 14-13 against Alabama, who are among the national championship favorites.

In their contest against Missouri, the Bulldogs harassed the opponent’s defense with relentless pass rush, forcing five Maty Mauk turnovers in the process. This style of play may prove difficult against the Razorbacks who capitalize on the runs and play a hard-nosed style of football. Nevertheless, the game will be mainly decided by the entire team-play effort and not merely forced turnovers. Also, the Bulldogs’ struggled to convert long third downs against Missouri and should work on bettering such players.Even more importantly, Georgia’s defense should be disciplined and endeavor to slow down Arkansas’ running backs Jonathan Williams and Alex Collins. Collins has seven yards per touch this year with 630 rushing yards and six touchdowns while Williams ran for 900 yards in last year’s campaign and has recorded 569 yards this season. On a good day, the two players can be a defense’s worst nightmare with their tireless runs and plays on the cut-back lanes, hence they should be tactfully tackled by Arkansas.Arkansas has lost 15 conference games consecutively, but it is no question that the team can improve. The Razorbacks played Alabama to a 14-13 loss and also took on the Texas A&M in a game they lost in overtime. The manner in which they played spiritedly, despite losing both games, is very noteworthy. If they are to find a win when playing against the Bulldogs, Arkansas must find a way of starting the game strongly and probably finishing off the game before the fourth quarter because the Bulldogs always tend to grow stronger towards the end of the game.Game OddsGEORGIA: -3½-110, OV 55 -110, ML -175ARKANSAS: +3½-110, UN 55 -110, ML +155The Razorbacks defense must be very tactful and outplay Georgia’s offense by limiting the efficiency of their first-down runs. Getting the Bulldogs’ offense off the ball will help Arkansas take control of the game.Freshman Nick Chubb played very splendidly in Gurley’s absence last weekend. He recorded 38 carries, eight more than Gurley’s career high, and 143 rushing yards, the best so far in his career. Although Chubb did not make a long touchdown run, he continually punished the opposing defense with his strength and athleticism. Last time Georgia played against Arkansas on the road was in 2009. In that contest, QB Joe Cox completed 18 of 26 passes for 375 yards and five touchdowns, allowing Georgia enjoy a 52-41.Game Prediction:But teams have the potential to win this SEC matchup, but the Bulldogs are one of the best teams in the conference, and it will show that once again by beating the Razorbacks this weekend.
Older post
Newer post