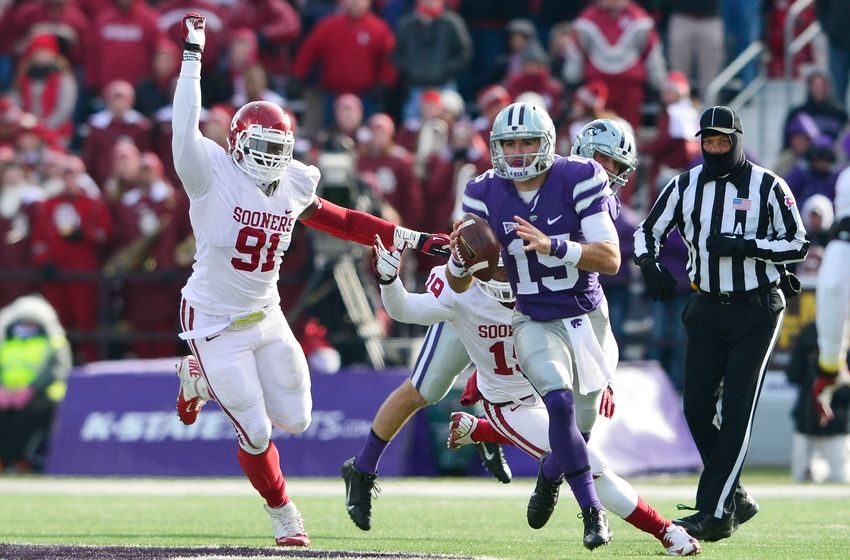 NCAA Football Betting News
It’s always great when you get a big conference match-up on a college football Saturday, but it gets even better when both teams are ranked and looking to move up the poll and fight for a ticket to the postseason. That’s what we get this coming Saturday in a Big-12 match-up that sees the #14 ranked Kansas State Wildcats (4-1) take their show on the road to #11 Oklahoma (5-1). Wildcats and Sooners are two of eight one-loss teams ranked in the top 15, and both need the win to remain alive in the Big 12 Conference race, which makes the game even more exciting and attractive for football betting fans.

The Widcats have been pretty efficient on offense all year, putting up good numbers in all but one game, which was in their lone loss of the season to Auburn. Where they have truly excelled, though, is on run defense. They are giving up an average of about 80 yards on the ground per game, but that is unfortunately not matched by their defense against the pass, which is giving up close to 300yards per game. If the Sooners can get the ground game going, this one has the potential to turn ugly. There is a pretty solid chance for Oklahoma to nail a division rival and cement in the top positions of the BIG 12 conference. They have a pretty balanced attack, though, and can beat you both ways. Their lone loss this season came in a classic against ranked TCU. The game went back and forth several times, with TCU managing to hang on for a 37-33 win. The Sooners were able to bounce back and beat the Longhorns in the Red River showdown, but they had to fight all game long to hold off a surprisingly resilient Texas team. BETTING PREVIEW & GAME ODDS One of the biggest wins in the history of the Kansas State football program came in the 2003 Big 12 Championship Game. The Wildcats put a stunning 35-7 win over the Sooners, but since that game, Kansas State has lost six of seven meetings against Oklahoma. The teams split the last two games in the series, each winning one on the road. The Sooners come into this one as a 7-point betting favorite, although the history between these two teams may suggest that covering that spread may not necessarily be a shoe in. If you go back to all the meeting between these two teams in Oklahoma. You will find that the Sooners are 4-3 SU, but are 1-6 ATS. That is a pretty significant trend that really can’t be ignored. Oklahoma is an even 3-3 ATS (1-2 at home) this season, while the Wildcats are 3-2 (0-1 on the road). What should be notes here, though, is that Kansas State has covered the spread in each of their last 3 outings. Game Odds: KANSAS STATE: +7-110, ML +235 OKLAHOMA: -7-110, ML -275 While the trends would suggest that Kansas State have what it takes to cover here, I just don’t see it happening. I’m just not sure the Wildcats are equipped to handle the Sooners offense, which is why I see Oklahoma winning straight up and landing a double digit win to cover the college football spread
Older post
Newer post