NCAA Football Betting News
The most disappointing feat for any program and bettors looking for college football odds is finishing with a winless season or ending an entire campaign without a trophy. Thanks to a bus offseason, there is excitement already building among the members of the Mountain West Conference, as every school is bidding for a brighter 2015-16 season.

For even more coverage on #MWFB, check out @PaulMyerberg’s long-form @MountainWest preview in today’s @USATodaysports http://t.co/mx7puGeUqp

Unfortunately, not every program will be successful; a good number of teams will find it difficult to maintain consistent positive outcomes. The breakdown below is a look at some of such MWC programs that are likely to struggle in the upcoming season, ranking among the worst teams in the conference.

After a having a terrible season last year with a 1-7 record, the Rebels decided to change their head coach by replacing former coach Bobby Hauck with highly-successful high school coach Tony Sanchez.  The Rebels believe the new coach can finally overturn their fortune and lead them to success, but this could be a big gamble for the Rebels, considering the big challenges faced by the team last year. For example, the offense ranked at No. 104 in the whole nation last year, averaging just 21.9 PPG last year. Meanwhile, UNLV’s QB Blake Decker threw for more interceptions (18) than TDs (15) last season, and only had 46.9 QB rating. Without a major overhaul in the team, starting in the offense, another disappointing season is very likely.

This will be a tough year for head coach Norm Chow, as he will be entering his fourth year with the program with a lot of pressure on him to deliver, following three years of disappointing finishes. For the Warriors to succeed, former USC QB Max Wittek needs to be firing on all cylinders right from the get-go, as Chow’s play-caller in Hawaii. Now that the Warriors have a new offensive coordinator in Don Bailey, there is hope that the mediocre offense will have a more up-tempo attack than last year. All these look promising on paper, but it doesn’t look like Chow will be helping his team improve much on last year’s 3-5 record. 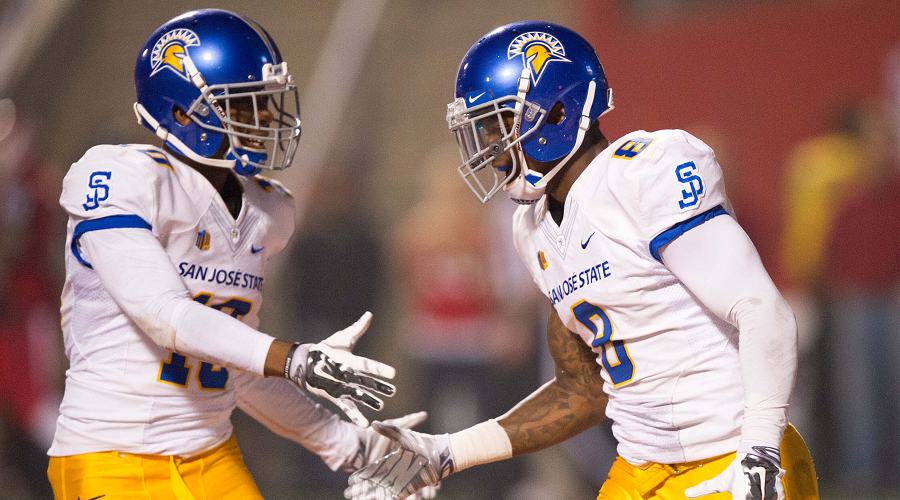 The Spartans are hoping to get better this season since the 2-6 record from 2014 was far from impressive. The Spartans offense disappointed, as they lost their last six games of the year, scoring only 14 points in their final three outings and averaging just 19.3 PPG the entire year. QB Joe Gray remains the main man in the offense this year, despite throwing for 2,305 yards with 11TDs and nine interceptions last year. On the D-line, the Spartans were somehow solid, as the defense ranked third in yards allowed in the Mountain West Conference. That said, San Jose State has done very little to improve the offense, hence it would be hard to see much improvements this year.

The Lobos only won two conference games in 2014, and it has been eight years since the program appeared in a bowl game. Nonetheless, the Lobos running game was impressive last season, ranking fourth in the nation in rushing offense, averaging 310.4 YPG on the ground. Meanwhile, the missing piece in the Lobos offense is rushing attack with a somewhat respectable passing game. If QB Lamar Jordan (who only completed 53 percent of his passes last season for six TDs and five interceptions) can improve, then there could be some hope. If not, the year is likely to end similarly like in 2014, or even worse.

Craig Bohl, the Cowboys head coach, will be entering his second season as the team’s coach with a huge amount of pressure to deliver. Wyoming underperformed last season, with a 2-6 conference record. This was the fifth season that Bohl coached a team that did not finish with a winning record. Fortunately, the Cowboys have a new QB in Cameron Coffman, a former Indiana player that completed 60.7 percent of his passes, for 2,734 yards with 15 TDs, and 11 interceptions as a sophomore with the Hoosier in 2012, meaning there is hope for the offense. Even so, Coffman cannot single-handedly pull the program through to success. More experienced players are needed to make the Cowboys more competitive in the coming season.

Despite surpassing expectations last year with a postseason berth, Nevada will have a tough task ahead due to uncertainty at QB position. Cody Fajardo, one of the key players for Nevada last year, has already graduated and he was the second Wolf Pack player to reach 9,000 pass yards with 3,000 rush yards in his career. Farjardo will be missed, with junior Tyler Stewart looking unlikely to match his predecessor’s success.