NCAA Football Betting News
Motivated by a streaking run of four bowl wins since 2012, including a thrilling come-from-behind win over the Baylor Bears in the 2015 Cotton Classic Bowl, the Michigan State Spartans are high on confidence as they enter the new college football season. And judging by how they’ve been impressive over the recent years, you wouldn’t really blame the Spartan nation for being stupefied with the prospects of more success in this year’s NCAAF odds. I mean, the Spartans have claimed at least 11 wins in four out of its last seasons, won the Big 10 title in the 2013 season (a year they went on to finish No. 3 nationally), and commendably participated in two January Bowls over the last two seasons, winning both games in astounding fashion. So although much of the recent public spotlight in the Big 10 has been mostly focused in the direction of the Ohio State Buckeyes, and rightfully so after they won the National Championship earlier this year, the Spartans equally have a lot to offer.

DE Shilique Calhoun and QB Connor Cook have been named to the 2015 @WalterCampFF Player of the Year Watch List. pic.twitter.com/Xg8iUN84aS

What is Connor Cooking?

After a record-setting 2014 campaign with the Spartans, third-year starting QB Connor Cook is back in Michigan State looking poised to impress once again for the Dark Green and White and possibly become the winningest quarterback in the school history. A strong Heisman Trophy candidate in 2015, Cook lost some of his favorite tools in Tony Lippett and Keith Mumphery, but his kitchen is still well-equipped with solid pieces like Aaron Burbridge, Macgarrett Kings Jr. and Josiah Price, so he should still be able to serve us with his addictive 2014 menu. In addition, Connor will be enjoying the protection of a wickedly strong offensive line, led by Senior All-American Jack Allen and left tackle Jack Conklin, who were the biggest reasons why Cook was only sacked 11 times in 2014. The Spartan backfield is also loaded with real warriors that can give you a 300 experience in the rushing department, including slashers Gerald Holmes and Madre London, incoming freshman LJ Scott and star back Delton Williams, who is reportedly set to rejoin the team after being indefinitely suspended earlier this year.

Needless to say, the Spartans lost a good deal of players in their secondary due to graduation or drafting into the NFL. However, the front seven still comes back with some solid defenders, who should ensure that Mark Dantonio’s stellar reputation as a defensive guru remains intact. To name a few, the Spartans are bringing back senior defensive end Shilique Calhoun after his 39-tackles performance in 2014. At the linebacker, junior Riley Bullough will be returning in the middle with Ed Davis and Darien Harris taking on their usual roles as outside linebackers. At the cornerback, it will be hard to replace star cornerback Trae Waynes and we are yet to see how things unfold at the end of the offseason. Even so, sophomore Montae Nicholson will be playing with veteran RJ Williamson at safety, which (if we add to the other talents in the defense) should ensure that the 2015 Michigan State defense doesn’t miss a bit. 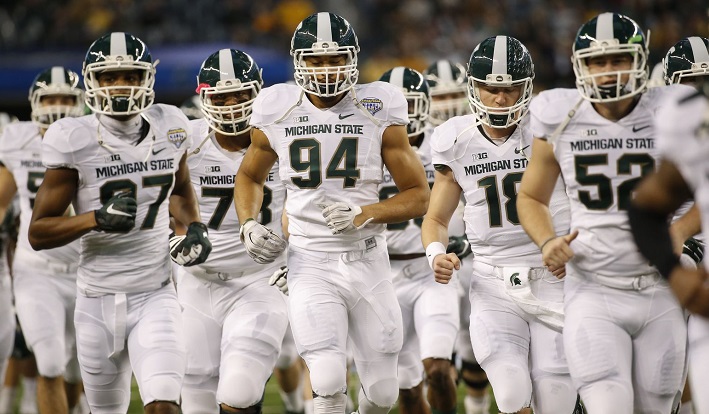 Conclusion and Betting Prediction for the 2015 the Spartans i

Whether or not the running backs live up to the expectations, Michigan State passing game is simply too good for the team to struggle offensively. Barring any major concerns from the cornerbacks, the defense should similarly impress in 2015. Assuming everything goes as we expect, the Spartans will not only be able to avenge last year’s loss, but they should be able to go on and even upset Ohio State at the end of the season, earning them a shot at the College Football Playoff. In a worst-case scenario, the Spartans will probably fall to Oregon, Michigan or Nebraska, and then stumble to the Buckeyes, finishing the season as a two-loss team to earn a Major Bowl Game. Whichever the case, the guarantee is that that the Spartans are not going to regress from their 2014 performance. Even with a few losses here and there, the Spartans are looking awfully better than they did last year, which should guarantee another good, if not better performance.
Older post
Newer post