NCAA Football Betting News
Just in case you hadn’t heard, Jim Harbaugh has left the San Franciso 49ers and will coach the Michigan Wolverines next year. Just kidding, of course – pretty much all NCAAF betting fans on the planet who have access to ESPN or any sports website, really, knows about this coaching change. But guess what? Coaches don’t win football games. Luckily for Michigan fans, there are plenty of other reasons to be excited about this season as well. Let’s take a quick look at some of them.

One reason has to do with the simple law of averages. In 2014, the Wolverines finished 5-7 under head coach Brady Hoke. However, a lot of this had to do with the luck of the bounce. Michigan had a -16 turnover margin, ranking them #124 among the FBS teams. Even if you look at the turnovers that only resulted from luck, the numbers still show that Michigan was one of the unluckiest teams in the nation when it came to turnover ratio.There were other numbers, such as the F/+ metric. This combines the FEI rating, which filters drives to eliminate clock kills in the first half and end of game garbage time and determines a team’s possession efficiency expectations, and the S&P+ ratings, which combine a team’s explosiveness, efficiency, field position and finishing drives. Football Outsiders had Michigan at #54 in F/+, which was the second highest mark for a team that finished 5-7. The implication from these numbers is that Michigan played as well as a bowl team but simply didn’t have the luck to get there.A lot of the players who underachieved will return to Ann Arbor, and the school also has a talented recruiting class and some hot transfers coming in from other schools. Derrick Green will likely be the rock in a strong backfield. He didn’t play well as a freshman, but last year he averaged 5.7 yards to carry and approximately 80 yards per game, only to fracture his clavicle in October. He, Ty Issac and De’Veon Smith are three big backs that should help the wolverines run roughshod over the opposition. 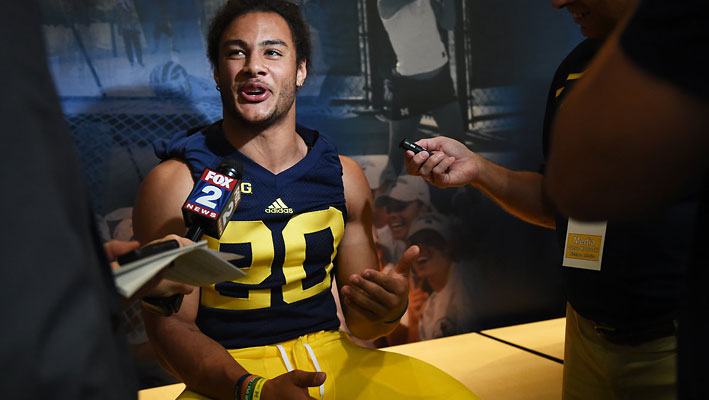 The offensive line returns four starters who struggled early on in 2014 but appeared to come together later in the season. The defense was stellar last year against the run and was OK against the pass, finishing with the seventh fewest yards per game in the nation. Michigan did lose some players to the NFL, particularly linebacker Jake Ryan and defensive ends Brennen Beyer and Frank Clark, but the secondary brings back Jabrill Peppers, a five-star recruit who took a medical redshirt after getting a leg injury. Stanford transfer Wayne Lyons will also help the secondary. This means that the Wolverind D could be great in 2015.But who will play quarterback? Jake Rudock is a graduate transfer from Iowa who put up a 133.5 passer rating, 203 yards per game and threw 16 scores against just five interceptions. He is fighting Shane Morris, who has a 49 percent completion rate for his career and has never thrown a touchdown (but has thrown five picks).With all of these variables, Michigan still has a chance to win nine games, even though they’re in the same conference with Michigan State and Ohio State, each of which is pursuing a College Football Playoff. If they do get to nine or ten wins, they will do it because they won the right way.
Older post
Newer post