NFL News and Rumors
Now that players are making their way to the first sessions of training camp, the 2015 NFL betting season is almost upon us. Here are 10 reasons why you should be excited about what the season has in store.

The Rise of the Oakland Raiders

Jack Del Rio is set to lead the Oakland Raiders – and he is easily the most energizing coach they have had their since the days of Jon Gruden. He will be overseeing the growth of Derek Carr, who already shows signs of becoming a top-notch NFL starting quarterback. Contending might be a few years away, but Raiders Nation has hope.

The Return of Adrian Peterson

Since Peterson’s suspension was lifted by a federal court, he can now return to the field in Minnesota, giving the Vikings an offensive weapon to balance Teddy Bridgewater. To hear Peterson tell it, he’s going to run for 2500 yards this season. Even if he hits 1,500, the Vikings could contend in the NFC North Division.

Patriots owner Robert Kraft quietly took the NFL’s sanctions against the team for DeflateGate, thinking that attitude would lead to Tom Brady’s suspension being reduced or even wiped away. However, Roger Goodell’s refusal to alter the suspension has made a rift between the commissioner and one of his biggest friends among the league’s cadre of owners. Now, Goodell is getting support from Jerry Jones, of all places.

Chicago quarterback Jay Cutler has long had a reputation for being a head case attached to a great arm. With the arrival of John Fox, though, he is showing more confidence than he has in years. Could this be the year that he starts living up to the potential of his cannon arm?

Chip Kelly’s Transformation of the Eagles

Now that the creator of the Blur offense has made the Eagles over in his own image, such risky moves as bringing Sam Bradford to town while shipping LeSean McCoy off to Buffalo will either pay off big-time…or they won’t. If Mark Sanchez starts any games for the Eagles this year, the experiment will have been a failure.

Two New Rookie Quarterbacks That May Impact the NFL Lines

Sure, there are more than two rookie quarterbacks in the NFL this year. However, the eyes of observers will be on Jameis Winston in Tampa Bay and Marcus Mariota in Tennessee. Both might start; both might ride the bench. Both will have a bumpy ride in their first season, though, thanks to the other problems that their teams have. 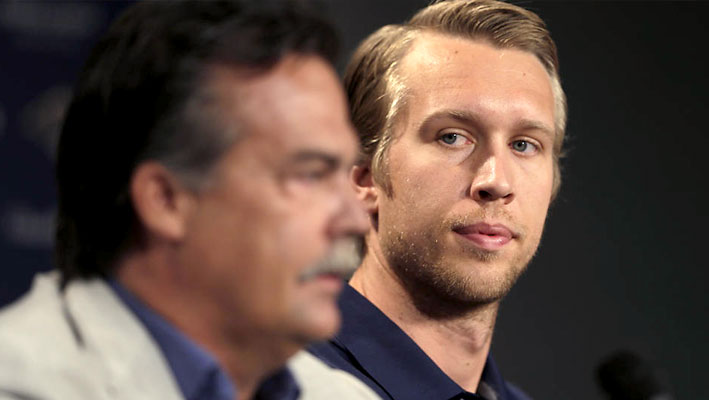 Rams owner Stan Kroenke has a team that should contend in the NFC West, based on the surprises they pulled last year – and their acquisition of Nick Foles. Will the Rams’ 2015 season be their last in St. Louis? Will they return to Southern California?

The Dallas Cowboys will be putting a lot of people with suspensions and involvement with the criminal law process on the field this year. Rolando McClain will be missing the first four games thanks to a violation of the drug policy. Greg Hardy will be missing the first four as well, thanks to domestic violence issue. Joseph Randle ran out of a suburban mall with underwear and a cologne tester he didn’t buy. How will this team gel on the field?

The Gauntlet in the AFC East

Miami, Buffalo and the New York Jets have all made strides this offseason that will help them improve in 2015, while the Patriots are all but sure to slide back, particularly during those games when Tom Brady is on suspension. This could be easily become a division that no one dominates, yielding a winner at 9-7.

The Redemption of Wade Phillips

After embarrassing turns as the head coach of the Dallas Cowboys and interim head coach of the Houston Texans, Phillips has shown that he doesn’t need to be running an organization. As a defensive coordinator, though, he is a strong coach – and he should bring the defense in Denver back to its original form.
Older post
Newer post