NFL News and Rumors
After losing their proverbial ‘glass slippers’ in each and every season of the Jeff Fisher era, the St. Louis Rams (6-10 SU, 7-9 ATS, 8-8 O/U) will enter the 2015 regular season looking end the mistreatment they’ve gotten from their ‘ugly step-sisters’ in the NFC West to become 2015’s version of Cinderella. With that thought in mind, let’s take a look at why the Rams could surprise more than any other online betting ‘Cinderella’ contender this coming season.

St. Louis Rams +4000 First of all, the Rams will enter the 2015 season with a new starting quarterback after parting ways with oft-injured 2012 No. 1 overall draft pick Sam Bradford. Fisher masterminded a deal with the Philadelphia Eagles to trade Bradford for Philly signal-caller Nick Foles and I believe the switch could be a good thing for a Rams team in need of a shot in the arm, although I don’t necessarily think Foles is that much ‘better’ than Bradford skill-wise.

Nevertheless, Jeff Fisher has gone 20-27-1 in three seasons leading St. Louis while never winning more than seven games. Over his last five seasons as a head coach, Fisher has not managed to top the eight-win plateau so I believe there’s a sense of urgency for Fisher to get the job done or possibly face getting the ax in spite of his pristine reputation.

I suspect that, as Nick Foles goes this coming season, so will the Rams. Unfortunately, no one really knows just what to expect out of the young signal-caller after a pair of polar-opposite kind of seasons the last two years. “I like Nick,” former franchise quarterback Kurt Warner recently told reporters. “One of the things I’ve always worried about with Nick is just the speed by which he plays. I’ve always believed that you have to be able to see and react very quickly. I felt in Philly’s system, he thrived because things transpired a little bit slower. A lot of the stuff was down the field where he could take his time to get through reads and he was very good in that system. But I also wondered ‘How does that translate to another system?’ In 2013, Foles earned a Pro Bowl berth in his first year as a starter by tossing 27 touchdowns passes and just two interceptions. Fisher and the Rams brass will hope for that version of Foles and not the 2013 version in which he threw 13 touchdowns and 10 interceptions in an injury-riddled campaign that saw him make just eight starts. Still, Foles managed to lead Philly to a 6-2 mark in those starts last season to improve to an eye-opening 14-4 since becoming a starter two years ago. If Foles can play anywhere near the level he showed two seasons ago, the Rams could have their ‘new’ franchise signal-caller well in hand. If he doesn’t perform, St. Louis will al most undoubtedly struggle, although I will say that I was very impressed with young backup quarterback Austin Davis last season. “…When you can go 27 [touchdowns] and two [interceptions], I don’t care who you are, that stuff doesn’t just happen,” Warner added. “You’ve got to be able to play. You’ve got to be able to eliminate mistakes and make big plays down the field. So that’s the upside that you’ve seen with him (Foles). We just don’t have a very big sample size on what he’s going to be.” Now, let’s take a look at some of the moves that St. Louis made in free agency. The Rams re-signed tight end Lance Kendricks to a four-year deal worth $18.5 million and I think they overpaid for a guy that is just a backup to starter Jared Cook. St. Louis also added veteran linebacker Akeem Ayers to help fill one of the holes in their mediocre linebacking corp. Ayers is solid against both, the run and pass, but he’s also not going to ‘wow’ anyone with freakish athleticism or many eye-popping plays. Still, the former second-round pick has been a solid performer since 2011. Ayers racked up four sacks and an interception while playing the final nine games of the 2014 season with New England. 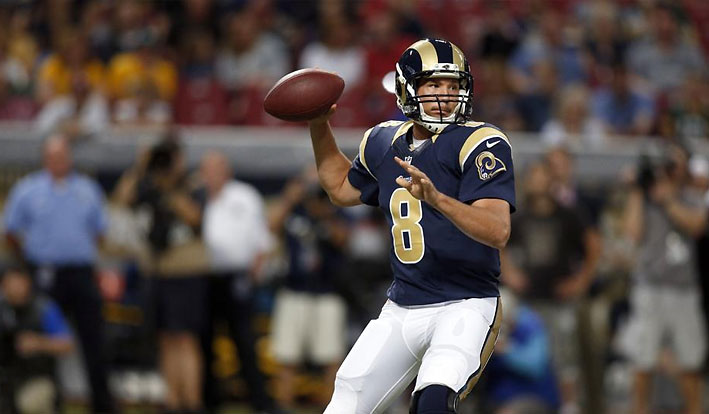 Despite having the best defensive line in the league, the Rams also added veteran defensive tackle Nick Fairley to give them even more depth. The former first round pick may be enigmatic, but he’s also talented. Last but not least, St. Louis managed to re-sign 2014 leading wide receiver Kenny Britt to a two-year deal worth $14 million. Britt had a very solid campaign and came on strong late in the season despite playing with an inexperienced quarterback in Davis and not getting many passes thrown his way in the first two weeks of the season. While the Rams own arguably the best defensive line in the entire NFL, they ranked in the middle third in every meaningful defensive statistical category and could improve their numbers dramatically – if they can get some competent play out of their offense that is. The Rams ranked in the bottom third in every significant offensive category including total offense (28th) and scoring (20.2 ppg, 21st). However, I do like young running back Tre Mason and I believe he could be in for a 1,000-yard season after rushing for 765 last season.

The Rams need to upgrade their offensive line a bit in an effort to keep Foles upright and healthy and give Mason more effective running lanes. I suspect they’ll go for either Brandon Scherff or Ereck Flowers with the 10th overall pick in the draft, but then again, you just never know sometimes. The good news is that St. Louis has a fantastic defensive line that often keeps them in games they seemingly shouldn’t be in. Veteran defensive end Robert Quinn and defensive tackle Aaron Donald both made the 2015 Pro Bowl with Quinn racking up 10.5 sacks last season and Donald recording nine. I love the fact that the Rams never quit on Fisher no matter their circumstances and I believe that both Arizona and San Francisco are poised to take slight steps backwards in the NFC West this coming season. The odds say the Rams will be more mediocre than mighty in 2015, but I say that makes them the perfect candidate to pull off a Cinderella type of season.
Older post
Newer post