NFL News and Rumors
With the first overall pick in the 2015 NFL Draft, the Tampa Bay Buccaneers (2-14 SU, 7-9 ATS, 5-11 O/U) clearly have a great opportunity to acquire a future franchise signal-caller and expedite their return to respectability under widely-respected head coach Lovie Smith, possibly, as early as 2015. Whom the Bucs will draft and how far they can climb in 2015 remains a mystery at this point. However, thanks to this expert NFL betting odds analysis on the Buccaneers and their chances of cashing in on their Super Bowl 50 Futures Odds, NFL betting aficionados everywhere will get the insight they’ll need in order to cash in on the Bucs all season long.

There’s no other way to say it, but there simply wasn’t much good news for the Tampa Bay Buccaneers in 2014. Outside of the fact the Bucs brought in a great head coach in former Bears leader Lovie Smith and got a fantastic Pro Bowl season out of monstrous defensive tackle Gerald McCoy (8.5 sacks), the Bucs are mostly looking ahead to the near future.

Well, there was undoubtedly plenty of ‘bad’ for the Bucs last season starting with the fact that free agent acquisition Josh McCown didn’t quite work out at quarterback like they’d hoped after having a fantastic season with the Bears in 2013. The Bucs were absolutely miserable on offense a year ago as they ranked 30th in total offense, including 25th in passing and 29th in rushing and scoring (17.3 ppg).

Tampa Bay’s offense was about as ugly as it gets last season. As the old saying goes however, there only one way this offense can go from here! 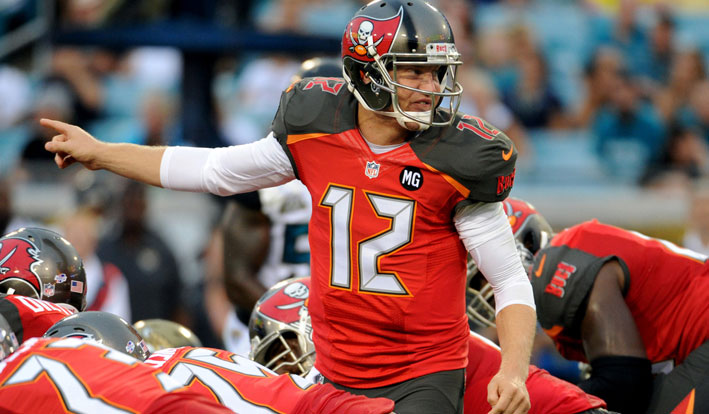 Let’s take a look at Washington’s statistics from this past season.

Tampa Bay’s offensive line was a complete wreck last season and needs an overhaul in the worst way, outside of veteran guard Logan Mankins and possibly starting center Evan Dietrich-Smith. I’m fully expecting the Buccaneers to have at least two new starters in this unit if not three.

The Buccaneers may need a running back, even though it was just a short while ago that Doug Martin looked like the long-term answer for the Bucs. Last season, Martin rushed for just 494 yards and a 3.7-yard-per-carry average while rookie backup Charles Sims gained just 185 yards while averaging a pitiful 2.8 yards-per-carry. Both backs were outplayed by third-stringer, Bobby Rainey as the now, fourth-year back out of Western Kentucky gained 406 yards while averaging a solid 4.3 yards-per-carry.

Gerald McCoy is a force to be reckoned with on the interior, but I suspect he’d be even better if he had some competent pass rushers to play alongside of. The trio of ends Williams Gholston and Michael Johnson combined for all of two sacks though fellow defensive tackle Clinton McDonald was a force inside with McCoy, finishing with five sacks on the season.

Tampa Bay Buccaneers +20000 The Buccaneers have the next-to-worst 2015 Super Bowl Futures odds on the board, but I think they’re going to be a lot better than anyone expects right now. Still, this franchise has quite a way to go in order to be considered a legitimate title contender.

With the first overall pick in the 2015 NFL Draft, the Buccaneers can really help themselves by drafting either Jameis Winston or Marcus Mariota, though I suspect it’s going to be Winston that gets the nod. Either way, I think it’s far too much for anyone to expect Tampa Bay to get back to respectability this season after winning just two games last season. The Bucs need to make a series of smart moves in free agency and the draft and they have some tough decisions to make with their own players like underachieving defensive ends Da’Quan Bowers and Adrian Clayborn.

However, I like Tampa Bay to win as many as six games in 2015 as Lovie Smith put more of his imprint on the franchise moving forward, particularly on the defensive side of the ball where he’s made his reputation as one of the game’s best defensive minds. I’m not sure the Bucs want Winston to come in and start right away, but I believe he is more than capable of doing so while speeding up his learning curve. Smith has already gone on record to indicate that Winston will be his choice, adding that concerns about the young signal-caller are similar to those that many other players have faced at some point in their respective careers. “You look at the league right now. You look at the history of our league and there’s been some good players that have been accused of things and they’re playing right now,” Smith said. “Some we talk about. Some we don’t even want to bring up. I’m talking about the ones that have been accused. There’s guys accused and there’s guys who have actually committed things. I think with Jameis, he’s accused. So for those people who are out there, if there’s a group, I assume there should be a group of people who have been proven innocent. They should have a say also.” No matter whom the Bucs take with the top pick, I don’t think it’s much of a stretch to believe Tampa Bay can reach a half-dozen wins. I’m also going with the Bucs to record a winning ATS record by keeping the final score a lot closer than most people thought in many of their 2015 matchups, particularly with the Bucs having just the 29th toughest schedule in the league next season (108-146-2, .425).