NFL News and Rumors
The St. Louis Rams (6-10 SU, 7-9 ATS, 8-8 O/U) have one of the game’s most respected head coaches in defensive guru, Steve Fisher. St. Louis also owns arguably the best defensive line in the entire NFL. Still, whether the Rams can finally get above .500 under Fisher will largely depend on the always-uncertain health of fledgling franchise quarterback Sam Bradford – and whether the Rams have a certifiable backup plan in case the brittle signal-caller goes down again this coming season. Thanks to the expert online NFL betting insight you’re going to get on Bradford and the Rams’ chances of cashing in on their NFL Super Bowl Futures Odds, you’ll have the insight you’re going to need in order to make a series of potentially profitable wagers on the Rams all season long.

There wasn’t a whole lot of ‘good’ for the Rams last season, but there was a bit-and it all starts with the team’s spectacular defensive line. Defensive end Robert Quinn and defensive tackle Aaron Donald both made the 2015 Pro Bowl to give St. Louis its best portion of good news in all of 2014. Quinn racked up 10.5 sacks last season while Donald got nine sacks while routinely stuffing opposing rushers all season. The Rams also got some good news after losing starting quarterback Sam Bradford (again) and watching third-string signal-caller Austin Davis far exceed everyone’s expectations – before tapering off a bit late in the season. The third-year pro from Southern Miss threw for 2,001 yards in 10 games and completed an impressive 63.4 percent of his passes with a dozen touchdown passes and nine interceptions. Last but not least, there was good news in the fact that this team didn’t – and never has – ever quit on head coach Jeff Fisher – and that’s saying something if you ask me.

In spite of owning arguably the league’s best defensive line in the NFL today, St. Louis was just mediocre on defense in 2014, finishing in the middle third in every significant offensive category including total offense (28th) and scoring (20.2 ppg, 21st).

In spite of Austin Davis’ breakout campaign, the Rams’ offense was absolutely ugly at times last season. Fisher’s team finished 28th in total offense while ranking in the bottom third in every other significant offensive statistical category.

Let’s take a look at the Rams’ statistics from this past season.

The Rams need help along the offensive line and at tackle to be specific. Veteran right tackle, Joe Barksdale is going to test the free agent waters and may not return for the 2015 regular season, Center Scott Wells is aging quickly and looks more like a backup than a starter these days, leaving the possibility that only veterans, Greg Robinson and Rodger scaffold return.

I like veteran wide receiver Kenny Britt and I must say that he played really well late in the regular season. But Britt, who led the Rams with 748 receiving yards last season, has never caught more than the career-high 48 balls he nabbed last season or totaled more than the 775 yards he racked up in 201 as a member of the Tennessee Titans. The bottom line is that guys like Stedman Bailey and Chris Givens aren’t going to cut it and St. Louis needs a No.1 wide receiver in the worst way. 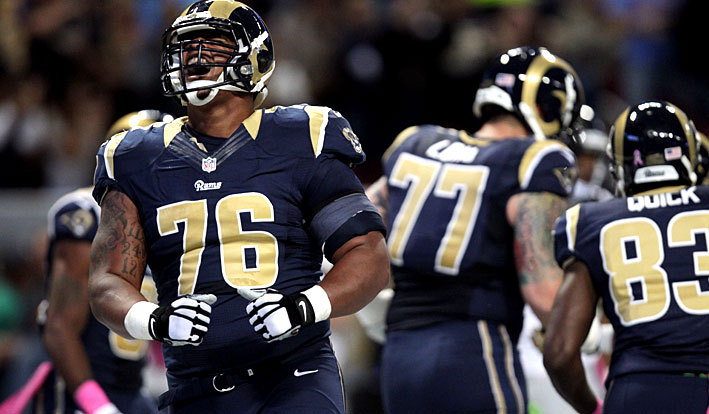 I’m fairly certain that no Rams linebacker made a tackle all season long. All jokes aside, St. Louis could use an upgrade at linebacker almost as much as the upgrades they need along the offensive line and at the wide receiver positions.

The Rams need an offensive lineman in the worst way to protect Sam Bradford, Austin Davis or whoever suits up under center in St. Louis. If Brandon Scherff and Ereck Flowers are both off the board by the time the Rams pick at No. 10, I expect St. Louis to go after Stanford tackle Andrus Peat, a mountain of a man that will be an instant starter in St. Louis.

The Rams, as an organization, have got to be exhausted hanging their hopes on brittle quarterback Sam Bradford each and every season only to see him felled by injury, seemingly over and over again. The first overall pick in the 2010 NFL Draft, Bradford has suffered two torn ACL’s while missing major stretches in two of his four seasons in the league. Bradford has played in just 49 of a possible 64 games and made just seven starts lat season. If Bradford isn’t ready by the start of the regular season (he should be) or falters out of the gate, then the Rams could turn to Davis. No matter what transpires with Bradford, I think the Rams would be wise to draft a young quarterback or two in the hopes that one or both will pan out in the near future. Ironically, Davis’ statistics over his first three NFL starts last season were better than any three-game stretch of Bradford’s entire career. While I’m expecting both, Arizona and San Francisco to take slight steps backwards in 2015, I still don’t see St. Louis winning more than eight games at best. Sam Bradford is pretty good when he’s healthy but he’s never shown himself to be the gun-slinging signal-caller that many imagined he would be back in 2010 and I suspect that he’ll never quite reach his full athletic potential. I love Jeff Fisher as a head coach and that’s the only reason I think the Rams could even approach eight victories in 2015. With so many question marks right now, I’ve got to believe the Rams are a seven-win team waiting to happen. I have no doubt that the Rams will play hard for Fisher, but its kind of hard t win a war when your opponents pulls out automatic weapons and you’re countering with a relic of a hand gun that works when it wants to. The Rams are broke – and they need fixing!