NFL News and Rumors
Since Tom Brady became a full starter for the New England Patriots in 2001, the Pats have won the AFC East title all but two times (In 2002 and 2008), including their last six in a row. Coincidence or luck? Neither, I’d say…! Brady is a proven master of the game and the Pats are a unit that is coached to win at all costs, albeit getting into one or two scandals. If you need an example, look no further than the 2014 season where New England’s Malcolm Butler, the hero of Super Bowl XLIX, made a splendid game-winning play despite being a rookie with just 220 snaps in his first NFL season. Yet, to qualify for that Super Bowl Finale against the Seahawks, the Patriots used under-inflated balls to gain undue advantage in AFC Championship game against the Colts—a case that is still on-going to date in the name of the Deflategate Scandal, with possible suspensions for Brady and other involved parties.So are we going to witness a continuous growth of the Patriots’ winningest dynasty under Brady and Coach Bill Belichick, or will the trio of Miami, Buffalo and NY Jets crash the New England party at the top of the division? Read on to find out in the NFC East 2015 NFL betting predictions detailed herein:

2015 Prediction: 9-7NFL Odds to Win Super Bowl 50: +2800There was nothing fortuitous about the Bills finishing on a 9-7 mark, as they bled and fought zealously to the very end of the season, including a season finale win over the Pats the 2014. That being their first winning record in 10 seasons, you can be sure that the Bills will be coming into the new season hungrier for more and full of belief that they can soar into greater heights. And with a new head coach in Rex Ryan leading them, a top-5 defensive unit in 2014, and a solid foray into the offseason trades that helped them retain the services of defensive end Jerry Hughes and capture Pro Bowl running back LeSean McCoy, you’d agree that things are looking up for the Bills. Just about the only concern for the team is that bringing in free-agent Matt Cassel to compete with former first-round pick E.J. Manuel for the QB position is not much of an upgrade. Still, if the two QBs can put up some decent numbers and figure out how to win games, then another winning season (and possibly a wild-card spot) will be in the offing for the coach Ryan and his boys.

2015 Prediction: 9-7NFL Odds to Win Super Bowl 50: +3000The Dolphins were amongst the biggest winners this offseason, bringing in a good number of essential additions, including NT Ndamukong Suh, NT Jordan Phillips, WR DeVante Parker G Jamil Douglas and RB Jay Ajayi. Getting some major upgrades on the D-line was particularly commendable of Dolphins General Manager Dennis Hickey and Head Coach Joe Philbin, as the team’s leaky defense cost Miami some winnable games in 2014. Meanwhile, QB Ryan Tannehill’s 2014 season showed that he can be a franchise quarterback, and with better protection for him, better numbers can be expected from him. Even so, with a challenging schedule and three fierce divisional opponents to compete against, it remains to be seen if the Dolphins will stand to be counted among the teams that will be playing in January 2016.

2015 Prediction: 11-4NFL Odds to Win Super Bowl 50: +450Until the league says otherwise, the bottom line for now is that Tom Brady will some games in 2015. Costly as that may be for the Pats in the offensive end, their biggest concerns are likely to come from their depleted secondary. The formidable cornerback duo of Darrelle Revis and Brandon Browner both shipped off New England this offseason, while cornerbacks Kyle Arrington and Alfonzo Dennard together with NT Vince Wilfork were also released from the squad. So, although the Pats re-signed safety Devin McCourty to a five-year, $47.5 million contract extension, and drafted potential stars in DL Malcolm Brown, OL Tre’ Jackson and C Shaq Mason, the experience gap left in the team’s secondary will most likely cause the Pats to struggle. That is not to say that the Pats won’t be winning the AFC East title, but rather that they won’t be running the table easily, like they did in 2014. 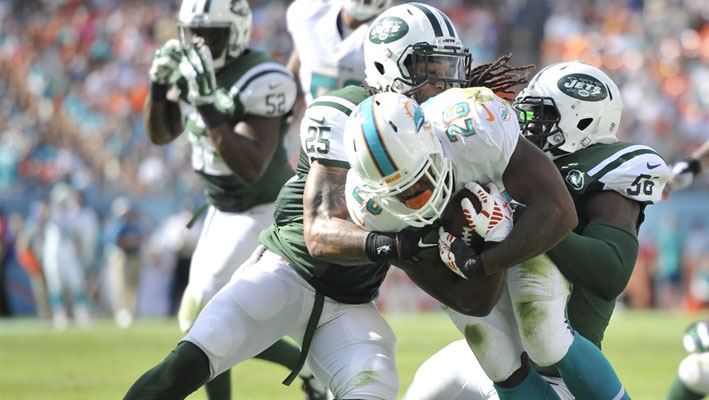 2015 Prediction: 6-10NFL Odds to Win Super Bowl 50: +6000Well, well, well, look what we have here…The erratic Geno Smith getting the starting role over a more experienced option in Harvard-graduate Ryan Fitzpatrick at the quarterback department? That, we have to say, was something we didn’t see coming. Nonetheless, the rest of the Jets’ offseason moves have been stellar, as General Manager Mike Maccagnan and head Coach Todd Bowles have made major additions to the team. The long list of the Jets’ offseason free agents brought in to the team includes an All-Pro lockdown in CB Darrelle Revis and Antonio Cromartie, plus S Marcus Gilchrist and CB Buster Skrine, who are bound to bring more defensive backfield power to the team. The NFL draft was also not short talent, as the Jets drafted star DL Leonard Williams, WR Devin Smith, OLB/DL Leonard Mauldin and Baylor’s standout QB Bryce Petty. Success from the rookies is, of course, not guaranteed, but with quality free agents like Revis, G James Carpenter and Co., it would not too stretched to dream of a 6-10 or even better season for the Jets in 2015.
Older post
Newer post