The AFC North has been reigning supreme in the league, as far as top-tier divisional competition is concerned. It therefore comes as no surprise that three AFC North members, the Pittsburgh Steelers, Baltimore Ravens and the Cincinnati Bengals are among the favored teams in the Super Bowl 50 Odds, while the Cleveland Browns are a potential sleeper team for the 2015-16 NFL lines. Below is a look at the NFL odds to win Super Bowl 50, complete with our betting guide on what to expect from the four teams in this division, which is likely to once again go to the wire, as has been the case in the recent years.

With Joe Flacco still leading Baltimore’s offense, the Ravens are bound to be one of the strongest competitors in the AFC North. Re-signing starting running back Justin Forsett was a good offseason move for the Ravens, and the availability of Steve Smith, Owen Daniels and Marlon Brown in the wide receiving department should give Flacco decent offensive options. Unfortunately, the Ravens lost No. 1 receiver Torrey Smith (who caught 49 passes for 767 yards and 11 scores in 2014) and a great talent in defensive end/linebacker Pernell McPhee, which is likely to affect the momentum built by Baltimore in 2014 Added to their tough slate for 2015, John Harbaugh is going to have one his toughest years as a coach for the Ravens. 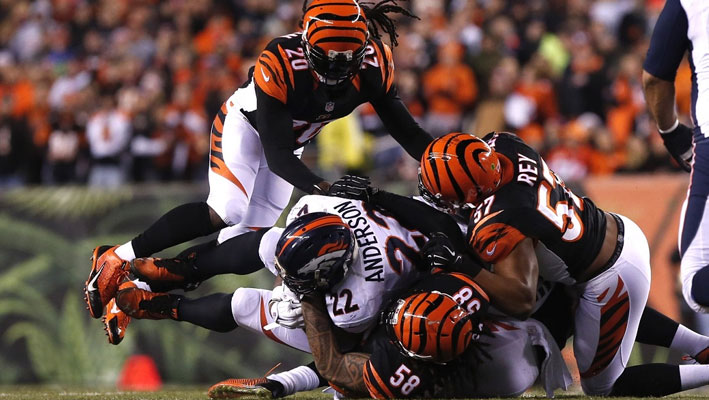 Signing free-agent end Michael Johnson from Tampa Bay and linebacker A.J. Hawk from Green Bay is likely to strengthen Cincinnati’s defense, while the roster changes that have been made by Cincy’s offense over the recent years guarantee a serviceable performance from the team’s offense. Consequently, even with Andy Dalton not ranking among the top echelon of quarterbacks in the league, Cincinnati’s strong running game and a hackable 2015 schedule should be good enough for the Bengals to reach the 10-win mark, as in 2014.

The Johnny Manziel project has been shelved until further notice, meaning that studying the Josh McCown project, as he hopes to dig the team out of the pit they placed themselves into last year. Comparably, McCown is more experienced and a serviceable upgrade to Manziel, but in all honesty, he doesn’t bring that much value to the team, coming off a 1-10 run as a starter with the Buccaneers last year. Irrespective of the flurry of moves made by the Browns this offseason, 2015 should thus be another disappointing season for the Browns.

The Steelers will be without running back Le’Veon Bell in the first three weeks of the season, which means that RB DeAngelo Williams, a free agent signed from Carolina, will need to give a good account of himself. Even so, the Steelers have a motivated QB in Ben Roethlisberger, who just signed a new contract with the team, while the offseason brought in an above-average group that is likely to give the Steelers a much-needed lift. So even with a tough schedule for them, just like the other members of this division, the Steelers should be able to rise above the competition in this division.