NFL News and Rumors
Winners of the last 4 AFC West titles in a row, Peyton Manning and the Denver Broncos are seeking a fifth straight divisional pennant when they embark on the 2015 season. Can Kansas City, San Diego and Oakland find a way to dethrone the Broncos, or will the Orange Crush give new head coach Gary Kubiak a dream start with a divisional title? Let’s take a look at the NFL odds and review the AFC West win/loss predictions for the 2015 season in the analysis prepared for you below:

2015 Prediction: 12-4Odds to Win Super Bowl 50: +1000The Broncos have established an iconic reputation as a perennial Super Bowl contender, and there’s no reason for things to change now that the very-talented Kubiak is in town and Manning agreed to stay for another season in Denver. Even so, the Broncos are a team in transition, so there will be a need for Kubiak and his staff to get their house in order. At the moment, though, we can affirm that the pieces are there, and if the relevant starting lineups are forged, the Broncos could challenge for another divisional title.

2015 Prediction: 9-7Odds to Win Super Bowl 50: +2000Using their magnificent offseason additions and a full-of-potential franchise quarterback in Alex Smith, the Chiefs are one of the teams that should be confidently earmarked for a winning season in the upcoming season. Jeremy Maclin from Philadelphia (85 catches for 1,318 yards and 10 scores in 2014) will especially be a key player to watch, offering a huge upgrade over the underwhelming Dwayne Bowe, who was released by the Chiefs. Meanwhile, the Chiefs will continue to enjoy the services of the hard-working linebacker Justin Houston (who led the NFL with 22 sacks in ’14) after they slapped the franchise tag on him in the offseason. With a tough stretch of games awaiting them in the new season (including Denver, Green Bay and Cincinnati within the first four weeks), it’s not going to be easy for the Chiefs, but through their expansive talent, 2015 should bear good tidings for Kansas City.

2015 Prediction: 6-10Odds to Win Super Bowl 50: +15000Jack Del Rio’s tenure with the Jags between 2003 and 2011 isn’t something you’d call a success story, so Oakland fans shouldn’t be too happy about the change of guard in the team’s head coaching department. Nonetheless, the Raiders have a developing QB in Derek Carr and QB Christian Ponder (acquired from the Vikings in the offseason) as a possible relief, while tackle Dan Williams, linebacker Curtis Lofton and cornerback Nate Allen are offseason additions that could be immediate impact players for the Raiders, alongside existing players like linebacker Khalil Mack. Therefore, even though the Raiders will probably finish last once again in this division, they are very likely to do so with a respectable win-loss record. 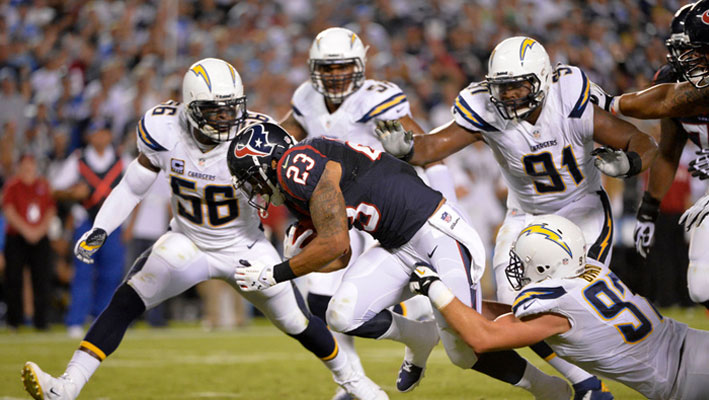 2015 Prediction: 10-6Odds to Win Super Bowl 50: +2800As usual, the Chargers are often a tough team to make a lock on, as they are very shifty in their games and offseason moves as well. Still, one thing is very clear about this year’s Chargers—2015 will see a bump in San Diego’s winning record, at least based on the on-paper improvements they’ve made. After re-signing their best cornerback Brandon Flowers (who helped the Chargers have a top-5 rated pass defense in 2014), the Chargers brought in right tackle Orlando Franklin from Denver and WRs Stevie Johnson Jacoby Jones from 49ers and Ravens, respectively. Then, to solve the concerns in the running back department, the Chargers used their first-round pick on Melvin Gordon (arguably the best RB in his draft class), and then used the other draft options to strengthen a variety of positions. With such straightforward moves to fill key needs in the team, the strongly-ranked quarterback Philip Rivers will definitely be able to lead the much-improved Chargers to a better season and keep the Broncos very pressured at the top of the AFC West.
Older post
Newer post