NFL News and Rumors
The preseason is a sure hope that the regular season is not so far from us. Teams have recruited and worked on their systems in the offseason and now have an opportunity to test whether or not they are ready to make the all-important mark in the NFL betting odds. Of course, the preseason may not give a clear idea of what the regular season will be like since it is more of a trial and error event dominated by backups, but that does not mean we cannot get a few takeaways especially when the first week was super-eventful and lesson-filled.

Serve the Stews with a Pinch of Salt …

If a season was to be judged based on the preseason, then New England Patriots and the Seattle Seahawks should find somewhere to hide, as they barely had a good representation in Week 1. Meanwhile, Oakland Raiders and Chicago Bears should be in cloud nine as Super Bowl favorites. Sadly, we all too well about the Pats and Seahawks and their seriousness in when the real season starts, just in the same way we know that the Bears and the Raiders tending to take a backseat when the real action begins. This is so characteristic of the preseason and the preseason, so if you are looking forward to a mouthwatering season and your team looks nowhere close to being seasoned, remember to have your serving with a pinch of salt…

Jimmy Garoppolo Has a Long Way to Go

Tom Brady’s backup Garoppolo completed 20 of 30 passes, but found it hard to keep the ball down the field. He averaged 5.3 yards per attempt and was sacked seven times. A number of the sacks ended up in a complete breakdown and he mightily struggled to release the ball in time.  In the next few games he will need to show a lot of improvement, or else the Patriots will have a tough season in the four games Brady is confirmed to repeat.

Joique Bell’s absence has presented the rookie with an opportunity to shine for the Lions. And on Thursday Night with all the bright lights shining, he certainly did his best to attract fantasy bettors to his side. In that Thursday game against the Jets, he collected 67 rushing yards on seven rushes. Abdullah gave us a glimpse of what we used to see in him at Lincoln, producing one of the best performances of week one. No doubt, he’s shown that he has the ability to provide what Reggie Bush and Theo Riddick could not provide at RB last season.

The Seattle Seahawks Have Offensive Problems

The Seahawks quarterbacks were sacked seven times on 35 dropbacks. Even Russell Wilson dropped back to pass four times and suffered two sacks. If this will continue into the regular season, then the Seahawks will surely be a shadow of themselves last season. It is clear that the departure of Max Unger and James Carpenter is being felt and relevant adjustments need to be made ASAP.

Did You Feel the Kirk Cousins Effect?

Cousins was on fire last week, wasn’t he? Well, for all you yesterday babies, that was not the first time we were seeing this show. A couple of years back, Kirk was one of the most sought after commodities in the NFL. However, reduced playtime and a couple of regressed performances closed our eyes on his potential. But after last week’s show, it’s safe to say our eyes are once again wide-opened watching him. It was not a clean performance against the Browns (154 passing yards on 14 attempts), but he certainly did better compared to starter Robert Griffin III. Unfortunately, RG3 still owns the starting job. Still, if he can give two or more of such games in the preseason, RG3 will be in precarious position, if he isn’t already.

Second overall pick Marcus Mariota’s first two possessions ended up in an interception and a fumble, but he later recovered to lead the Titans to a 10-play, 80-yard touchdown scoring drive. He finished the night with 7-of-8 passes for 94 yards. Jameis Winston’s debut against the Minnesota was iffy, as he completed 9 passes of 19 for 131 yards and one interception, though he had a good eight-yard running touchdown, giving him the advantage over Mariota.

Beware: The Injury Bug is Around!

Redskins’ tight end Niles Paul, Vikings’ offensive tackle Phil Loadholt, and Jaguars’ guard Julius Thomas are among the players who were injured in the Week 1 preseason games and are currently on IR. New Orleans corner Brandon Browner looked like he came down with a serious knee injury, casting major doubts on the team. Others like St. Louis Rams corner E.J. Gaines had it worse, set to miss the whole season. At such a rate, teams will need to be wary, especially in regards to their key starters. I wonder, does Geno Smith’s injury count on the preseason games week 1 injury list?

Besides the success that the Broncos had against the Hawks without Peyton Manning, one evident change was that they concentrated more on running the ball than passing it, typical of Gary Kubiak-led teams. They ran the ball 32 times (compared to 31 pass attempts) and collected 113 yards on the ground, and doing quite well at it. For Fantasy football bettors, be on the lookout for Denver’s runners, as they are due to carry some major loads this season.

Goodbye Rugby… Hayne is in the NFL to Stay!

It is becoming clearer that San Francisco’s Jarryd Hayne will be staying after a period of his speculated departure. His performance for the 49ers with a splendid 53-yard run proved that he is settled and ready to convert his rugby league skills into NFL productivity. Being around football starters has really helped his game and he may make the roster. In the preseason game against the Texans, he had an average of 12 yards on two punt returns and went for a kick deep in San Francisco’s end zone to the 33 yard zone, attracting the admiration of many. 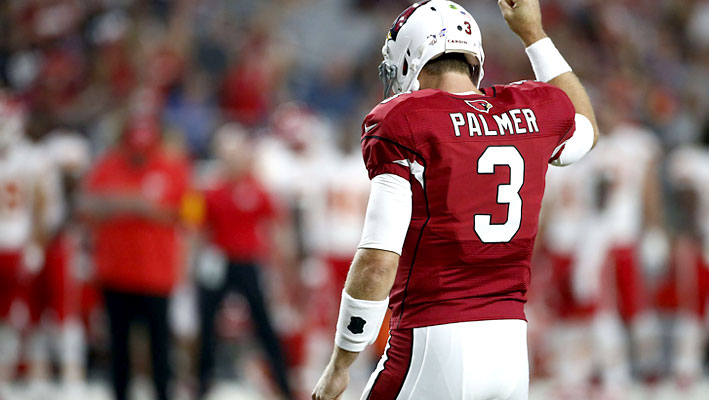 A good preseason is majorly marked by a healthy team. Arizona is flying high given the state of health that their players have returned in.  Carson Palmer, Tyrann Mathieu and Andre Ellington all looked great on their return. Palmer and Mathieu are fully over their injuries they got a year ago. If it continues this way for them, they are likely to have a great season. Parting Shot! The injuries that have come in the past few days clearly show that a season cannot be judged by the first day of the preseason. Even more notably, some teams struggled while others thrived, answering a few questions and leaving answers in other areas. To have a better glimpse of what to expect in the new season’s NFL betting lines, let us wait for the remaining weeks of the preseason, starting with Week 2’s games.
Older post
Newer post