Oh-oh, yes I’m the great pretender Pretending that I’m doing well My need is such I pretend too much I’m lonely but no one can tell – The Platters I don’t know how to say it, but the aforementioned lyrics, once sung by the legendary Platters, describe Philip Rivers and the San Diego Chargers perfectly, if you ask me. You see, I’ve given quarterback Philip Rivers and the San Diego Chargers (9-7 SU, 7-9 ATS, 7-9 O/U) the benefit of the doubt for a handful of seasons now, expecting the Bolts to become legitimate Super Bowl title contenders, mostly because of the multitude of talent-laden rosters they’ve fielded over the last decade or so. 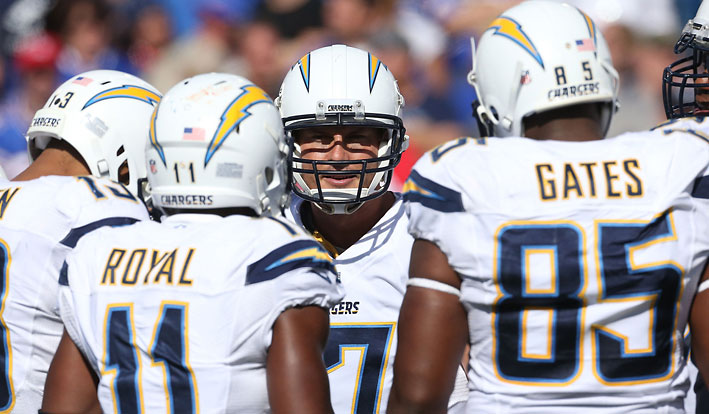 No longer will I be fooled into thinking the Bolts could become something more than what they’ve been under Rivers’ leadership. Now, Rivers and San Diego are on my clock to prove they can make the leap from pretender to legitimate Super Bowl title contender in 2015.

Let’s take a look at how the Chargers will fare as they try to cash in on their NFL betting odds for the coming season.

The Chargers were obviously pretty good in 2014 if they won nine games and narrowly missed out on earning a postseason berth as an AFC Wild Card contender. Having said that, San Diego’s problem is that they’re not bad – but that they’re not quite legitimate title contenders, falling somewhere in NFL purgatory if you will. Still, the Chargers were solid in their passing attack, even without any receiver having anything near a Pro Bowl season. Rivers ranked eighth in passing yards (4,286) and the Bolts finished 10th overall in passing. San Diego’s defense was also spectacular against the pass, finishing fourth overall, (214.2 ypg) with Pro Bowl safety Eric Weddle and Pro Bowl-caliber cornerback Brandon Flowers leading a talented secondary. 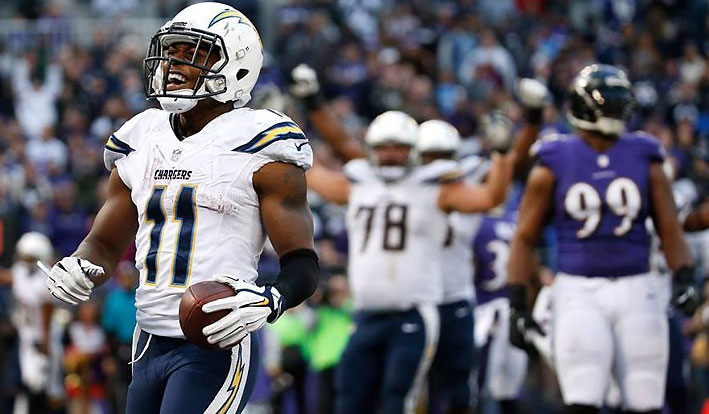 The Chargers had their share of ‘bad’ in 2014, with starting running back Ryan Mathews going down – again – after just six games of what has been a roller-coaster five-year career with the Bolts. Not surprisingly, the Chargers finished 30th in rushing by averaging a disgraceful 85.4 rushing yards per game. San Diego also finished the 2014 regular season ranked 26th against the run (124.1 ypg), so clearly, the Chargers have work to do in beefing up their run defense. While San Diego was wise to acquire former Colts running back Donald Brown in free agency a year ago, Brown struggled tremendously in averaging a pitiful2.6 yards-per-carry in 13 games.

The fact that the Chargers all but abandoned their running game after Matthews went down was pretty ugly if you ask me. Teams  that lined up against the Bolts, basically had to concentrate on stopping Rivers in the passing game, making the Chargers and one-dimensional team that was destined to flame out against a more-balanced opponent at some point. 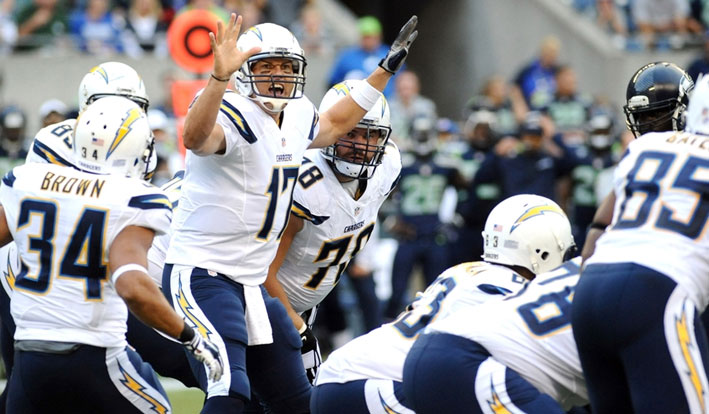 Let’s take a look at San Diego’s offensive statistics from this past season.

Here is a look at San Diego’s team defensive statistics. 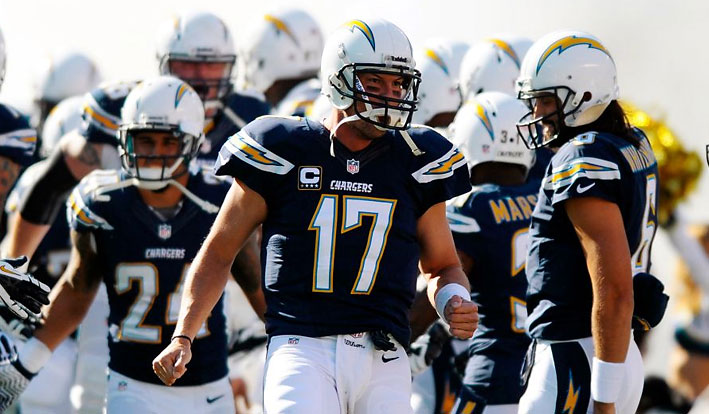 Trash-talking wideout Keenan Allen and blossoming young tight end Ladarius Green both took a step backwards in 2014 with Allen going from 1,046 yards and a 14.7 yard-per-catch average as a rookie in 2013 to just 783 receiving yards and a 10.2 yard-average in 2014. Green was supposed to be headed to ‘breakout’ status in 2014, but had just 226 receiving yards after getting 376 yards as a second-year player in 2013. Veteran tight end Antonio Gates is still very good, but he’s also 34-years-old and in need of fewer minutes at this stage of his career, so playing Green a lot more in 2015 would make sense.

Guard Chad Rinehart was absolutely awful last season after signing a two-year deal last March. However, I guess I shouldn’t single Rinehart, San Diego’s entire offensive line, outside of talented left tackle King Dunlap, was pitiful in 2014 if you ask me. King has a fantastic season in allowing just three sacks on 625 pass plays, but I suspect the Bolts could have at least two new starters in 2015 – if they’re smart. 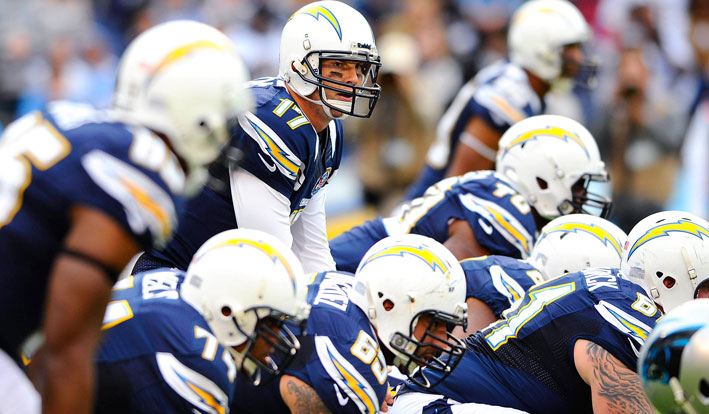 Matthews has had a bumpy ride in his five seasons with the Chargers, gaining over 1,000 yards twice – while also missing 20 games with myriad maladies. On the plus side, Matthews’ talent is undeniable with the former Fresno State star owning a career 4.4-yard average. Still, the handwriting could be on the wall for Matthews.

The Chargers have the 17th pick in the first round and should go for Melvin Gordon if he’s available, if not, I really like Nebraska’s Ameer Abdullah, a back that I believe is a potential superstar. 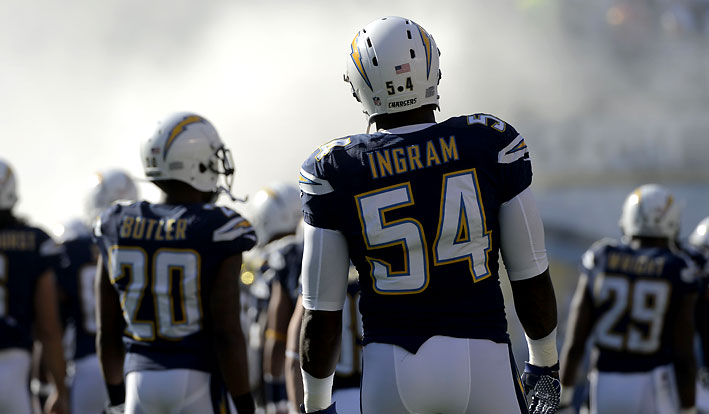 At +4500, the Chargers are tied for 10th in the  Super Bowl Futures Odds, but I’m surprised that their chances are lower than teams’ like New Orleans and San Francisco to be honest about it.

The Chargers have an elite kind of quarterback in Rivers, but he’s 33-years-old now and the clock is ticking. San Diego really needs to re-sign their important free agents and acquire a legitimate starting running back first and foremost. The Bolts also need to re-build their skill positions a bit,  and make sure they keep Rivers upright and injury-free as much as possible. With just the 16th toughest schedule in the league in 2015, (132-123-1, .518) the Chargers should have a chance to reach the postseason in 2015 and I believe they will by narrowly reaching the double-digit win total. 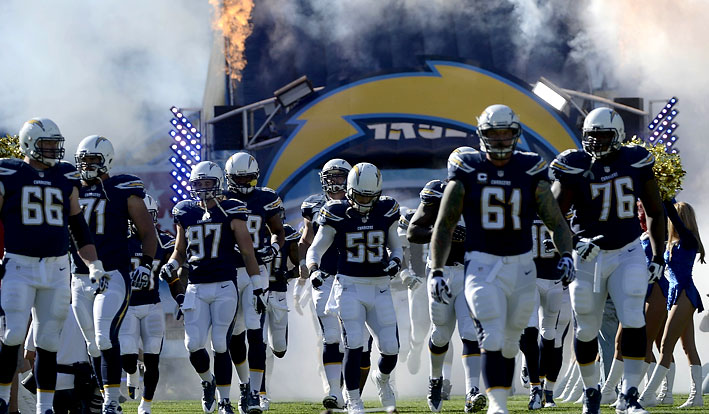 Now, whether the Bolts can do anything in thee postseason remains to be seen. However, as I wrote at the beginning of this article, I don’t have a whole bunch of faith in the Chargers at this point and I can see them flaming out of the postseason a whole lot easier than reaching Super Bowl 50. Still, at +4500, the Chargers could be a good bet to suddenly fulfill all of the ‘potential’ they’ve had for the last decade and come up with a season for the ages. Then again…those ‘Great Pretender’ lyrics just keep ringing in my ears! 2015 San Diego Chargers Predicted Records: (10-6 SU, 9-7 ATS, 7-9 O/U)
Older post
Newer post