NFL News and Rumors
The aging Peyton Manning and the Denver Broncos (12-4 SU, 8-8 ATS, 10-6 O/U) are on the clock thanks to this NFL betting analysis on the top five questions surrounding Denver heading into training camp. What’s in store for the future Hall of Fame quarterback and his team? Let’s take a look…

Can Manning Change the NFL odds for the Broncos?

If last season was any indication, Manning still has enough left in the tank to remain an elite quarterback, but time is clearly running out on the future Hall of Fame inductee. Sure, Manning looked a step slower than normal last season and many of his throws seemed to lack some of the zip they used to in past seasons, but let’s recount. Manning completed a blistering 66.2 percent of his passes in the regular season while throwing for 4,727 yards with 39 touchdown passes and 15 interceptions. Those numbers tell me he’s still clearly an elite signal-caller. Unfortunately, Manning didn’t play very well in completing 26 of 46 passes for a modest 211 yards in Denver’s 24-13 playoff loss to Indianapolis.Still, I believe that Manning has more left in the tank than he showed late last year and that his play this coming season won’t drop off nearly as much as some may think.

HOW MUCH WILL THE OFFENSE CHANGE?

It will change significantly under new head coach Gary Kubiak, the former head coach of the Houston Texans from 2006 to 2013. Kubiak likes to run the ball and has done so effectively throughout his career. The former backup to John Elway has already gone on record to say that the Broncos will run the ball more this coming season. 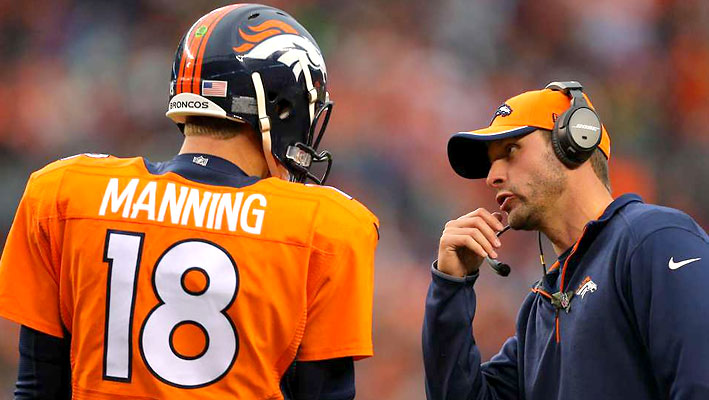 WHO’S THE STARTER AT RUNNING BACK?

The Broncos list veteran C.J. Anderson as the starter heading into training camp and that certainly doesn’t look like a bad choice, seeing as how the underrated former Cal star has a career average of 4.8 yards per carry and is coming off a season in which he rushed for 849 yards and 4.7 yards per run.Backing him up is former Wisconsin star Montee Ball, a talented back that opened the 2014 season as the starter. Like Anderson, Ball is a third-year back that owns a solid career average of 4.2 yards per run. I suspect that Kubiak will find plenty of rushing attempts for both in 2015.

WILL THE DEFENSE SHOW UP?

Yes…they most certainly will!The Broncos defense gave up 22.1 points per game to finish 16th in points allowed, but that’s a bit surprising to me considering the fact that they finished third in total yards allowed (305.2 ypg), ninth against the pass (225.4 ypg) and second against the run (79.8 ypg). Kubiak brought in widely-respected defensive genius Wade Phillips to take over a defense that was good, but never as great as its collective talent.Phillips and Kubiak enjoyed plenty of success with the Texans a few years back and Phillips’ affinity for a 3-4 defense will play to the strengths of elite pass rushers, Von Miller and DeMarcus Ware. I also love the fact that the Broncos were willing to take a chance of super-athletic linebacker Shane Ray, although some other teams were scaredThe loss of starting nose tackle Terrence ‘Pot Roast’ Knighton will sting a bit, but the fact of the matter is that Phillips is inheriting a defense that is already very good and one that could be great under his tutelage. The Broncos had five defensive players make the Pro Bowl a year ago, something that means they’ve got plenty of talent, a fact that isn’t lost on Phillips.“Anytime you’ve got great players, that’s what you’re looking for…difference makers,” Phillips said recently.

DO YOU BELIEVE IN GARY KUBIAK?

Yes…I do believe!I know Gary Kubiak has what looks like an unimpressive 61-64 career record (.488) in eight seasons leading the Houston Texans, but he did bag back-to-back AFC South division titles in 2011 and 2012, while producing a quarterback, running back and wide receiver that all led the league at some point in their respective careers.Sure, things went horribly awry for Kubiak and the Texans in his final season in 2013 (2-11) but I believe he’s a perfect fit for Peyton Manning and the Broncos at that Denver will show an offensive balance this coming season that they haven’t seen since signing Manning to be their starter three years ago.Kubiak is as experienced as they come too, having participated in six Super Bowls in his career, while losing three as a player with Denver and winning three as an assistant coach with the Broncos and San Francisco 49ers.
Older post
Newer post