NFL News and Rumors
The Cincinnati Bengals will enter the 2015 NFL betting season looking to keep their carriage from turning back into a pumpkin – for the fifth straight season of the Marvin Lewis era.Could this finally be the year that Cincy finally completes their ‘Cinderella’ hopes or will they lose their ‘glass slippers’ at the worst possible moment – again? This expert analysis on the Bengals’ chances for success in 2015 will both, inform and entertain NFL pro football betting buffs across the globe.

Cincinnati Bengals +3000The good news for Bengals (10-5-1 SU, 8-7-1 ATS, 6-10 O/U) fans and betting enthusiasts that still have belief in this often bewildering ballclub should know that head coach Marvin Lewis had led Cincinnati to four consecutive postseason appearances.Unfortunately for quarterback Andy Dalton and company, they’ve had their ‘glass slippers’ unceremoniously snatched away, losing in the AFC Wild Card round on each occasion.Nevertheless, I’ve still got some hope that the Bengals can get their first playoff win of the Lewis-Dalton era and pull off a magical Cinderella kind of campaign in 2015.

The Bengals finished the 2014 regular season ranked an uncharacteristic 22nd in total defense and an identical 20th against the run and pass. However, Lewis and Cincinnati’s front office took some nice steps to address their needs in free agency by adding veteran defensive end Michael Johnson, former Pro Bowl linebacker A.J. Hawk, solid cornerback Brandon Ghee and defensive tackle Pat Sims.The Bengals also re-signed may of their key free agents including guard Clint Boling, play-making middle linebacker Rey Maualuga, tackle Eric Winston, place kicker Mike Nugent, tight end Kevin Brock, feel-good-defensive tackle Devon Still and cornerback Chris Lewis-Harris.I love the way Cincy addressed their big need at linebacker by re-signing Maualuga and adding Hawk and suspect that young linebackers Vincent Rey and Emmanuel Lamur will be better in 2015 with another year of experience under their respective belts.While Johnson and Sims aren’t necessarily household names, they are both solid defensive linemen that will give Lewis the depth he was lacking along the defensive line last season.I also like the fact that the Bengals apparently found their running back of the near future in second-year back Jeremy Hill after the underrated rusher came ‘from out of nowhere’ to rack up a fantastic 1,124 yards while averaging a jaw-dropping 5.06 yards per carry.After not getting more than 15 carries in any of his first seven games, Hill took off like a bat out of hell by rushing for 154 yards in Week 9 before going on to record four more 100-yard-plus efforts over Cincinnati’s final nine games.I know quarterback Andy Dalton struggled more last season than he has since coming into the league, but the Bengals’ passing attack took a big hit because of injuries last season and I expect them to get back to being one of the better attacks in the league in 2015 – if they can add another play-maker opposite of superstar wideout A.J. Green that is.Young receiver Mohamed Sanu was impressive in snaring 56 passes as a rookie last season, but I believe Dalton needs at least one or two more legitimate threats at the wide receiver position if they want to have a really balanced offense next season.Cincinnati will also have to overcome the losses of several players that played key roles on their team this past season, including cornerback Terence Newman, safety Taylor Mays and defensive end Robert Geathers among others, but I like the free agent additions they made. 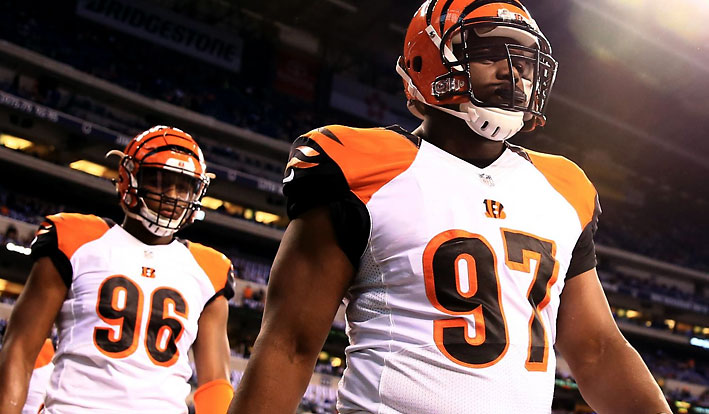 Now, there are some obstacles that Lewis, Dalton and the rest of the Bengals will face in 2015, starting with the fact that Cincinnati will play the second toughest schedule in the league next season behind only AFC North division rival Pittsburgh.The good news however is that the Bengals will face four new coaching staffs (all on the road) when they square off against Buffalo, Denver, Oakland, and San Francisco, a quartet of games they look like they have a very strong chance of winning – right now.No matter how well the Bengals fare against the spread, they’re going to be one unhappy bunch if they fail to win a playoff game for the sixth straight season in a row.
Older post
Newer post